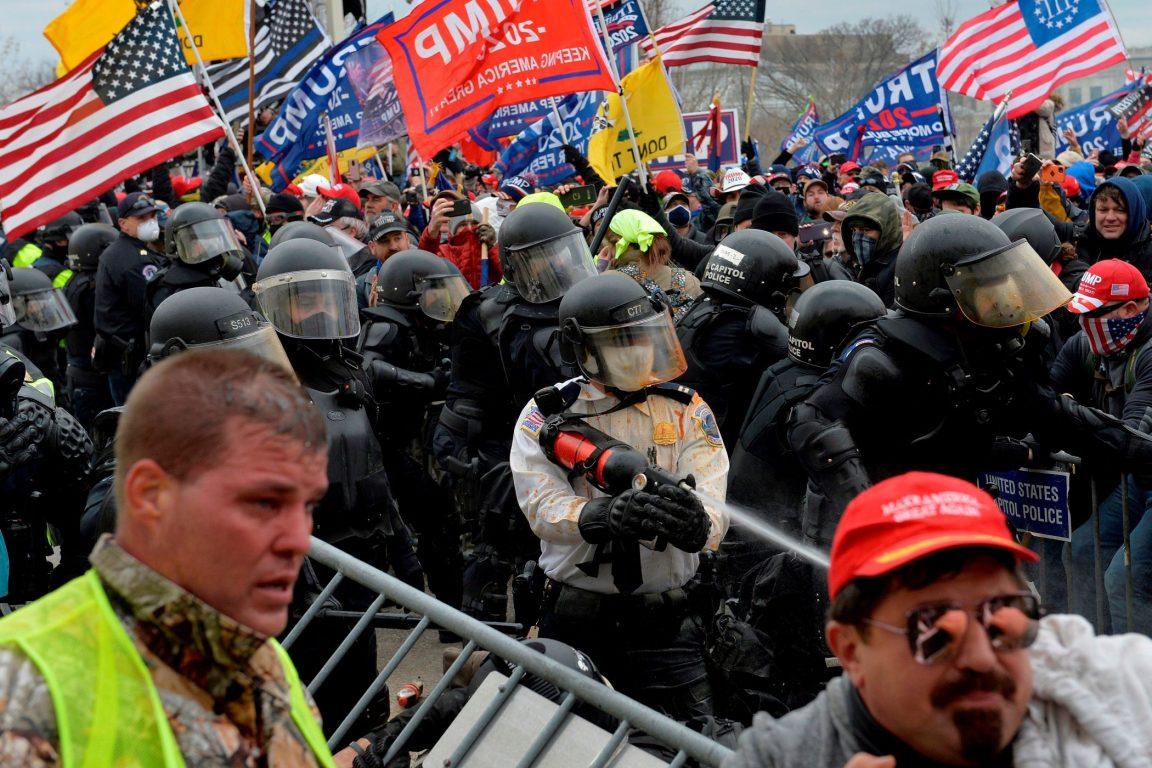 December 30, 2020, the New York Times published an article about Franco A, a German neo-Nazi living a double life with two different identities.

While he was a lieutenant in the German Army, he was posing as a Syrian refugee under the name of David Benjamin, supposedly a minority Syrian Christian, and had been planning a terrorist attack with the goal of inciting the German population against refugees.

The case led to a wider investigation exposing how far-right extremists had infiltrated the entire security network of the country, including the military, police and intelligence services.

A report by the country’s domestic intelligence service had one group of these extremists in uniform stocking up arms and suggesting that even a small number of highly trained and radicalised officers posed a significant danger for the state and for society.

What the Times missed is the extent at which similar circumstances exist in its own country, as has now been exposed by the insurrection at the US Capitol by supporters of outgoing president, Donald Trump.

The angry mob the president sent to march on Capitol Hill was made of white nationalists and conspiracy theorists. Their mission was to stop the certification of Joe Biden as winner of the November election and have Trump’s own vice president, Mike Pence, who presided over it, change the result of the election.

Trump had openly invited his supporters to Washington DC for the protest on January 6, 2021, the same day his election loss to Joe Biden would be certified by the US Congress

Quite alright, the media in the US has written extensively about white supremacy in the military, but the same kind of scrutiny has not been extended to other uniformed personnel, particularly the hundreds of police departments.

In recent times, particularly in the wake of Black Lives Matter protests, the origins of policing in America have been traced to the slave era, with white citizens organising to hunt down and capture runaway slaves.

This may explain the culture of racism exhibited by the police, but it doesn’t excuse the existence of extremists and white supremacists within policing communities or the indifference of the media.

The absence of media scrutiny, was in part, why rioters loyal to Donald Trump, were able to take control of the US Capitol for six hours without much resistance from the Capitol Police.

According to media reports, among the rioters were off duty police officers, active-duty troops, military veterans and well-known white supremacists.

There was some resistance from the Capitol Police with one officer losing his life and dozens more injured.

But there were also members of the Capitol Police who embraced the rioters, shared the same sentiments and even showed them the way to the offices of certain members of Congress, all of which are now under investigation.

Police departments across the country have also opened investigations into whether their own members were part of the rioters.

This after current members of New York Police Department, their counterparts in Seattle were identified in social media footage as part of the mob.

The Timothy Snyder, a professor of history summed up the Trump inspired insurrection saying; “The racism structured into every aspect of the coup attempt is a call to heed our own history.

“Serious attention to the past helps us to see risks but also suggests future possibility. We cannot be a democratic republic if we tell lies about race, big or small.”

It is hard to say which image of the insurrection is most shocking, the rioter tying a noose on a makeshift gallows, the white nationalist with his feet on the speaker’s table or the picture of Capitol police with their guns drawn, in front of a barricaded door.

But one of the most heartbreaking image was of Congresswoman Susan Wild, a 63 year old mother of two, hiding in fear for her life.

She would later tell CBS News that it was “possibly the most frightening thing I have ever gone through in my life. I am deeply afraid for what it means for the future of our democracy.”

One day after the mob invasion, speaking to CNN, she still had fear in her eyes.

So, what lessons should the world take away from the January 6 event in the United States, a country that is supposed to be the beacon of democracy?

How do you characterise the actions of Nancy Pelosi, the Speaker of the House of Representatives when she calls up Gen. Mark Milley, the Chairman of the Joint Chiefs of Staff, asking him to deny President Trump access to the nuclear codes?

Considering that we are talking about the US, the House speaker did the unthinkable by asking a military chief to basically disobey the orders of his Commander in Chief.

In any democratic country, this would be considered as an attempt to undermine his authority and command of the military, maybe even treasonous.

The reality is that while recent events may have convinced the heads of key institution to ignore presidential orders for at least the next few days, it will have a lasting effect on US democracy

Ironically, no well-known constitutional law expert, historian or even public commentator has responded to her actions with any form of indignation.
That expression of disgust has been directed at the president.

It is Donald Trump that is being accused of sedition, inciting a rebellion against Congress, against his own government and the constitutional order, words that haven’t featured in public discourse since the American civil war more than 150 years ago.

Who would have thought that in the US, one arm of government would incite an armed insurrection against another arm?

Trump had openly invited his supporters to Washington DC for the protest on January 6, 2021, the same day his election loss to Joe Biden would be certified by the US Congress.

According to a close confidante of the president, the whole episode was Trump’s way of pressuring Mike Pence to unilaterally change the election results, after failing to convince him to do so in a meeting days earlier.

And almost immediately after the certification began, Trump started attacking his own vice president with audio messages on Twitter, at a moment the mob was on its way to disrupt the proceedings presided over by the vice president, who had gone to the Capitol with his family.

The mob that descended picked up on Trump’s tweets chanting calls of “hang Mike Pence”.

The vice president is reported to be outraged and surprised, telling close friends how it was unexpected ‘after all that I have done for him”.

With the president also livid, he is telling anyone that cares to listen that he made Mike Pence.

Now, Trump and Pence are not on talking terms. But for anyone who believes in constitutional democracy, maybe the most interesting scenario took place while the vice president, who had refused to be evacuated from the scene, was in hiding from the mob at the basement of the Capitol.

It took the intervention of the vice president to activate the National Guard and send them to Capitol Hill.

In doing so, Pence and the department of defense didn’t only circumvent the president, legally speaking, the lacked the authority to do so.

And for a brief moment it seems, the vice president usurped the powers of the president.

Only it wasn’t just a brief moment, resisting pressure to invoke the 25th Amendment, which allows the vice president, along with the cabinet to declare the president incapable of discharging his duties, aides to Mike Pence have said the president can’t really do any harm because no one at present will obey his orders.

The reality is that while recent events may have convinced the heads of key institution to ignore presidential orders for at least the next few days, it will have a lasting effect on US democracy.

Besides, the president still has a mob of loyal supporters willing to inflict harm on his perceived enemies.

And with all his flaws, his willingness to burn the entire house down if he can’t get way, 75 million American still voted for Donald Trump, enough to remain a disruptive force in future elections.

According to polls, more than half of those 75 million voters wanted Congress to overturn the election result.

The obvious question is whether the United States of America can remain a stable democracy in the years to come.