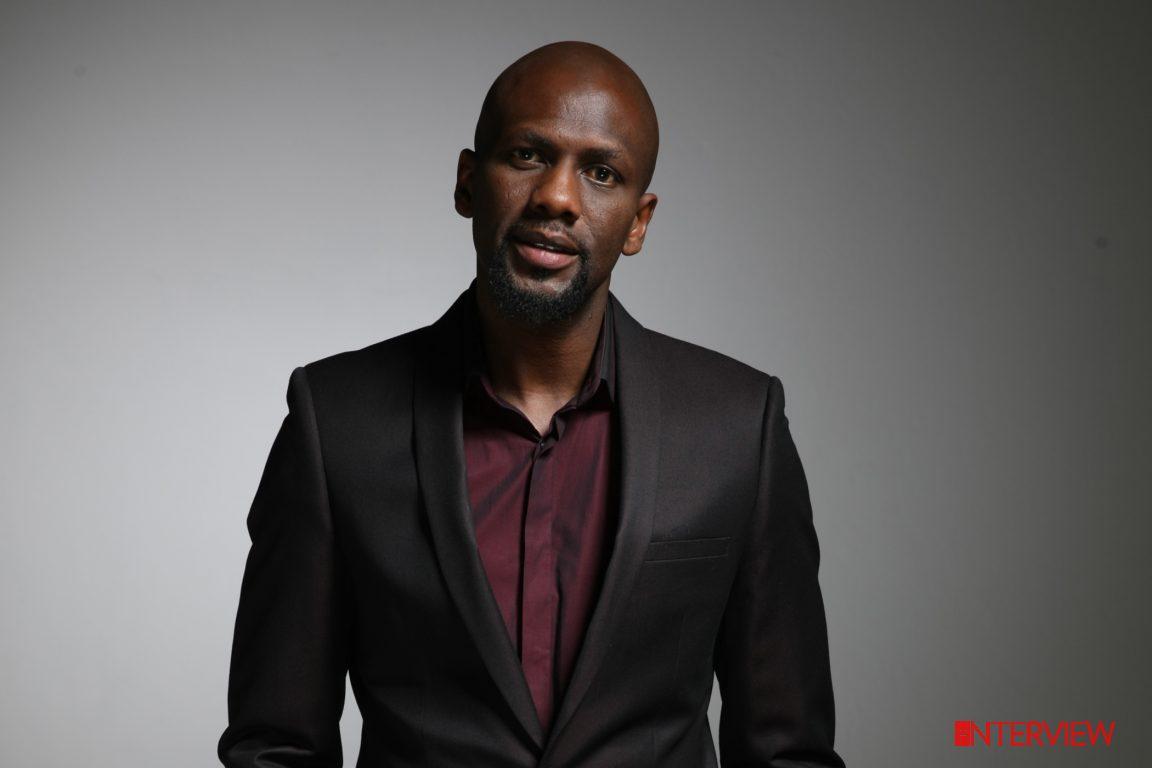 Fabian Adeoye Lojede is famous for his unforgettable role as Bola Abayomi in Jacob’s Cross. Born in Lagos Nigeria, his was relocated from Nigeria at the age of five, to the UK to join his parents.
He completed his primary education and part of his secondary school education in London. He moved back to Nigeria in 1984 where he completed his secondary school and University getting a B.Sc. in Psychology from the University of Ibadan.
A film producer and director, Fabian co-produced ‘Comatose’, a dramatic afro-futurism film, which explores an African perspective on the euthanasia debate.
It was screened at this year’s Pan-African Film and Television Festival of Ouagadougou (FESPACO). The film features Fabian, Bimbo Akintola, Mary Thwala among others. In this interview, Fabian talks passionately about the African film industry and his Pan-African initiative:

What influenced your move to the big screen?

The right story came my way. I’d always wanted to move to the big screen, the opportunities that came just didn’t seem right, so I did mostly TV commercials and concentrated on my copywriting, voice over work and producing.

Would you say that ‘Jacob’s Cross’ was the turning point in your career?

Can you recall your reaction when you landed the role in ‘Jacob’s Cross’?

Not really. I was still a bit weary as to if it would end being another negative portrayal of Nigeria, which had lead me to walk away from some jobs in South Africa in the past.

But it ended up being one of the most pleasant long running creative experiences I’ve ever had.

What sacrifices did you make playing the recurring role?

My business suffered quite a bit. TV series is like a 9 to 5 job. It’s time and commitment

You cannot really love Fela and not be a pan-Africanist

Coming back home to complete your secondary and tertiary education, how easy was it for you to adapt to the Nigerian system? Any major culture shock?

There was culture shock even though I was born in Nigeria. The first thing that hit me as a five-year-old in the UK was seeing so many white faces and just a few black faces.

I was a Mushin boy as you can imagine, there weren’t too many white people taking afternoon strolls in the neighbourhood.

Then coming back home, the first thing that hit me again was seeing so many black faces and not a white face in sight per se.

But that only hits you for a day or two. School wise, it was the corporal punishment. You could take on teachers in the UK, well I use to anyway.

The worst you get is in lines and detention. I learnt the hard way that back home teachers could beat the shit out of you. By the time I got to the university there was no culture to be shocked at.

Was the choice to study psychology borne out of passion or necessity?

My father used to get a lot of Rosicrucian Digest magazines when I was younger, and that’s when I discovered the world of Psychology.

Though I must say I was scared that if I didn’t make it as a creative I could always do my PhD in Clinical Psychology and become a shrink.

How involved are you in the South African film industry?

As involved as one can be, both as a producer and production company owner with my business partner Mickey Dube.

If you are to make a comparison between Nollywood and South African film industry, what would it be?

While Nollywood is far more refined in terms of commercialisation of local film content. I wouldn’t really say South Africa has a film industry in the local sense like Nigeria.

In terms of longevity, I would say that Nigeria is more promising as you can’t really build an industry on soft money and grants.

If the Nigerian film industry could get just a fraction of the kind of institutional support that the SA film industry gets, I believe we would most likely have one of the highest return per dollar in the creative industry anywhere in the world.

This is not just about providing funds, it is the whole facet of film making, from helping institutions to develop training for filmmakers, particularly the technical and financing side.

So, we can have highly trained personnel that can attract international films to be shot in Nigeria even if the film is not about Nigeria or set in Nigeria.

Ensuring that local films get enough running time versus international films, exempting films made at certain low budgets from taxes, the money you don’t take at times is as good as giving money.

Protecting filmmakers from exploitative practises from both local and international distributors and exhibitors.

Of the three major film industries in the world, US, India and Nigeria, Nigeria is the only one that doesn’t have a clearly defined tax or financial incentive backed by the government.

Do you think Nollywood represents the African film industry wholly?

Wholly, no. Africa is going through so many things and I’m not sure any country can bear the burden of the total representation of that.

Creatively, I think the only creative to have taken that responsibility and succeeded was the great Fela. You could use his music from the 70s all the way to Beast of No Nation to chronicle what was going on across the world and how it affected Africa.

Do you think streaming platforms like Netflix is the future of films?

For the independent filmmaker, yes. Not sure about the future of film. There is something about sitting in a huge dark room, with surround sound and a huge screen that I think a sofa and a plasma screen can never replicate.

But Netflix is a saviour for storytellers. The way the industry was structured before them would have killed new voices for sure.

What can you say is the major intervention that has happened in the film industry lately?

Improvement in digital cameras, lowering of the cost of some post production softwares and of course VOD platforms.

From a content point of view, there is a new African and black awakening which I feel will drive narratives going forward.

What informed your passion to drive a pan-African initiative and what is it all about?

Well, you cannot really love Fela and not be a pan-Africanist. I guess you can if you’re one of those people that just hears his music without listening.

You can’t help but be pan-African when you realize that as Africans, we are still being pulled by political, cultural, economic, and religious strings of our former colonizers.

What obstacles stand in the way of pan-Africanism today?

Ignorance and the belief that foreign ideologies – religious included are a form of higher civilization to replace rational and humanistic thought.

Self-hate is the virus they introduced in Africa that gave them the confidence to give us independence. They knew they didn’t need to be here to destroy and loot from us any more.

They could simply just outsource it to some of our leaders, academics and religious bigots.

How many projects are you working on at the moment?

Wow! Quite a few. I’m currently shooting a new international TV series in Cape town, which we are not allowed to mention until we wrap.

In development, we have a pan-African music drama series called ‘Eko Vibes’, a documentary ‘Omo Egun’, which is about tracing my family’s masquerade history and lineage in Abeokuta.

I have also gotten the blessing from the Thomas Sankara family to develop a feature on the great pan-African leader.

I visited his family house and his village, it was an amazing and humbling experience. It left me with hope that if we could produce one of him we can produce more.

I’m also in post-production for my short titled, ‘Eje’ and I have a few productions coming out like, ‘Heavens Hell’ which opens May 10 in Nigeria.

A film with Kate Henshaw directed by Akin Omotoso, produced by Ego Boyo, ‘Ghost and the House of Truth’, coming out end of the year.

A series I did with Yomi Black, ‘Jelli and Clitoris’. My own production ‘Comatose’ with Bimbo Akintola which we just released the teaser trailer for.

Why pick a debatable topic like euthanasia for ‘Comatose’?

I like subject matter driven films and the subtext you can inject in them. This one has quite a bit of subtext driven into it beyond the topic of Euthanasia.

What emotional sacrifices did you make co-producing and starring in ‘Comatose’?

Personally, it was tough as my wife and I had just had a baby and I was away most of time.

Are you taking it to other festivals? Any planned theatrical release?

We intend to release it in Nigeria and SA.

Are you impressed by the kind of Nollywood films produced today?

Definitely I think we have come a long way.

I’m a product of the kind of colonial thinking we need to weed out. Where schools would punish kids for speaking their own language

How friendly is the South African business terrain?

(Laughs!) It’s tough, like anywhere in Africa. Africa is harsher towards Africans. But the government must be commended for at least having programmes aimed at boosting business opportunities for their citizens.

China is doing the same thing with clear-cut goals in all areas to boost growth. Take their film industry for instance, there is a quota on foreign films that are released there to help boost the commercial consumption of local films.

The West will tell you this is protectionism and anti-free market rules and they will get African guys to back it up for them.

But when Rwanda says no more imports of second-hand clothes, to help build their local free market of home-made clothes, the West threatens sanctions and that is not protectionism to them.

Can you explain the synergy that has kept you and your wife in business together without conflict?

Do you speak Yoruba fluently?

Fluently, but not fluently enough for my liking. I wish I could speak Egba. But I’m a product of the kind of colonial thinking we need to weed out. Where schools would punish kids for speaking their own language.

Heights. Love my feet on solid ground. None of that mountain climbing, skydiving ‘shit’. Remember that video clip of that army guy that didn’t want to jump out during training, that’s me right there.