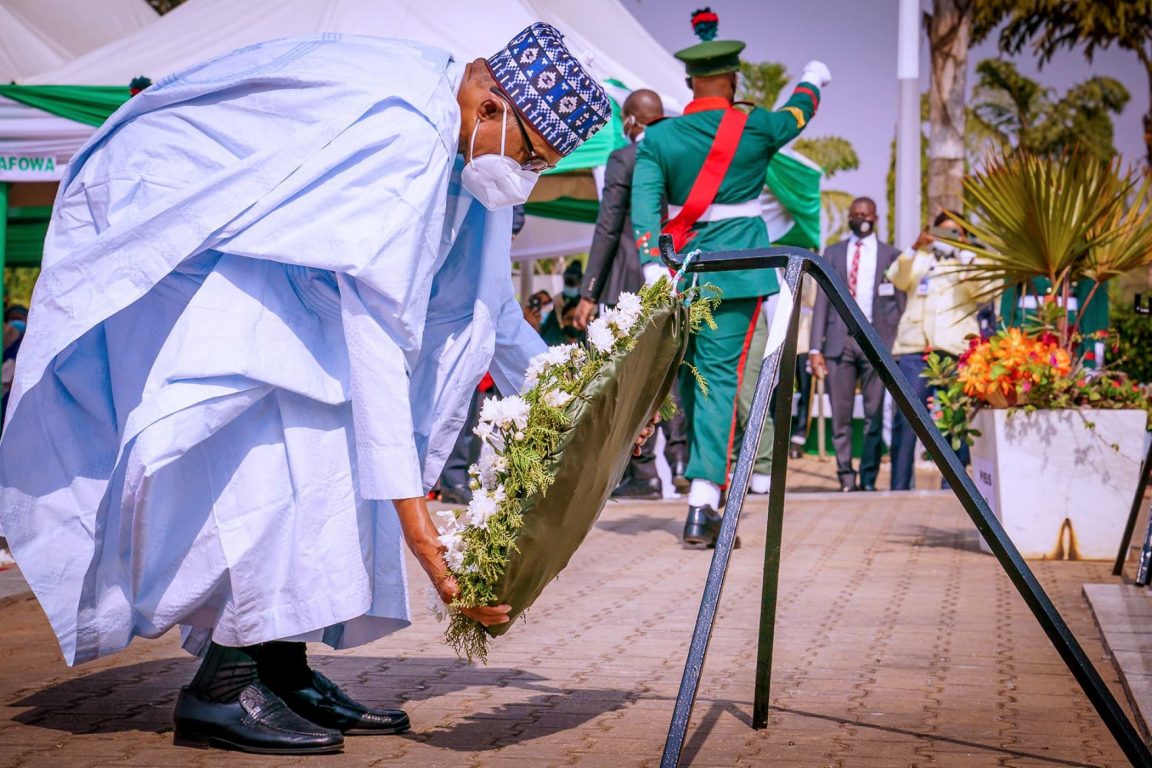 There’s no year I attend the Wreath Laying Ceremony marking the Armed Forces Remembrance Day Celebration that I don’t shed a tear or two. Secret tears.

Yes, secret, as men don’t want to be seen giving way to emotions in public. But why not?

Charles Dickens wrote: “Heaven knows we need never be ashamed of our tears, for they are rain upon the blinding dust of the earth, overlying our hard hearts.”

So brothers, when you need to shed a tear or two, do it.

When rainfall needs to come from your eyes, let it come, let the rain of blessings fall, as they are “rain upon the blinding dust of the earth, overlying our hard hearts.”

Why do I usually give way to emotions at the wreath laying ceremony, as it also happened last Friday, at the event commemorating the 2021 Armed Forces Remembrance Day Celebration?

I hear the dirge, mournful tunes played by the military band:

Shall we gather at the River?
Where bright angels feet have trod
With its crystal tide forever
Flowing by the throne of God.

Yes we’ll gather at the River
The beautiful, the beautiful river
Gather with the saints at the river
That flows by the throne of God.

Or this other tune:

Abide with me, fast falls the eventide
The darkness deepens, Lord with me abide
When other helpers fail and comfort flee
Help of the helpless, oh Lord abide with me.

Those songs kindle something in your heart. What? Sorrow. Empathy. Esprit.

And when you see the widows of dead soldiers, officers and men, under a special pavilion, clad in somber dresses, something breaks in you.

Women who once had their men to themselves, gallant souls, smart and resplendent in their uniforms, fighting for their country, shooting from the land, the air, and the sea.

Now, those men are gone. Young, spry, with hopes and plans for the future. Decent men, killed by indecent people, the just for the unjust.

And the young ladies, some in the mid-morning of their lives, or in the early afternoons, now left forlorn and lonesome. Disconsolate. No cuddles, no warm embrace even in chilly weathers.

In the words of John Keats the poet, they are “alone and palely loitering, the sedge is withered from the lake, and no birds sing.” You can’t but feel for them.

And the clincher. An electronic board was mounted at the venue.

Scrolling the pictures of those gallant officers and men, cut down in their prime, paying the supreme price for the unity and wholesomeness of their country.

A country in which some indecent souls don’t even appreciate the sacrifice.

Smartly turned out in their uniforms, some in armored tanks, others in fighter jets, some others in trenches and battlements, all now gone to the hangar in the sky, to the officers mess beyond the blues.

Your eyes become misty. They were just like us. Sons to somebody. Husbands to tender wives. Fathers to toddlers, young boys and girls. They had hopes, dreams.

Service to fatherland. Decorations for bravery. Retirement. Old age. And so on.

But like George Orwell wrote in A Hanging: “He and we were a party of men walking together, seeing, hearing, feeling, understanding the same world, and in two minutes, with a sudden snap, one of us would be gone-one mind less, one world less.”

The colourful parade was led by Major Abdulmalik Sulaiman of the Nigerian Army.

It was a worthy tribute to Comrades-at-arms, who had passed on. And wreaths were laid in their memory.

The widows were represented by the wife of Major S.K Umar, who met his death in December 2015, while serving at the 143 Battalion, in Adamawa State.

The decent killed by indecent insurgents, the just for the unjust.

Mrs. Umar is young. Too young to be a widow. But does death give time and date?

No matter your state, even if shattered and crestfallen, you can still lend a helping hand.

As she went to lay her wreath, next to her was Chairman of Nigerian Legion, Brigadier-General Adakole Jones Akpa.

The latter is apparently a bit infirm, and needed some steadying hands. He found it on the shoulder of Mrs Umar.

The representative of the widows steadied the Chairman of the Nigerian Legion to lay his wreath, and back to his seat.

Didn’t she have enough grief, enough problems of her own? Wasn’t her heart aching to breaking point?

But she still offered a helping hand. Please try a little kindness, shine your light for everyone to see, so matter what you may be passing through. Bravo, Mrs Umar.

Now, something for those who twist my every word, turn it upside down, to generate hatred. Something for them to wail about. The release of the pigeons.

At every Armed Forces Remembrance Day, after the laying of the wreaths, the sitting President releases some pigeons, to symbolise peace in the land. Emblems of National harmony. It was not different last Friday.

The pigeons had been kept in a cage. For how long, I do not know.

And when birds and some other roaming animals have been circumscribed for a while, they get accustomed to their new status as lawful captives.

Therefore, when you offer them freedom, they first baulk, thinking it’s too good to be true.

President Buhari opened the cage that held the pigeons, about a score or so. One hesitated, then flew, followed by another.

The others temporised a bit. And then, two, three minutes later, they all took to the sky.

Nothing extraordinary in the development, you would think.

But not to the idle and indolent, most of who populate the social media.

It was time to major in something minor, cavil, find fault unnecessarily.

The pigeons didn’t fly, they refused to fly, it’s ominous, they wailed like wailing wailers.

And you began to wonder: are people this idle? Don’t they have productive things to do with their times?

Are their minds so addled, and all they want to do is find faults against their President, ascribing spiritual connotations to a non-issue?

For their information: Muhammadu Buhari has no time for such frivolities.

He just continues to serve the country with his heart and mind, trying to make a difference in security, economy, and anti-corruption.

And he will get there, by the grace of God. But if they don’t change, the wailers will be losers, standing small.

May the souls of our heroes rest in peace. May their widows be comforted.

Their sons, daughters and dependents cared for.

We were together, walking, seeing, hearing, and understanding the same world.

And in two minutes, with a sudden snap, they were gone. “One mind less, one world less.”