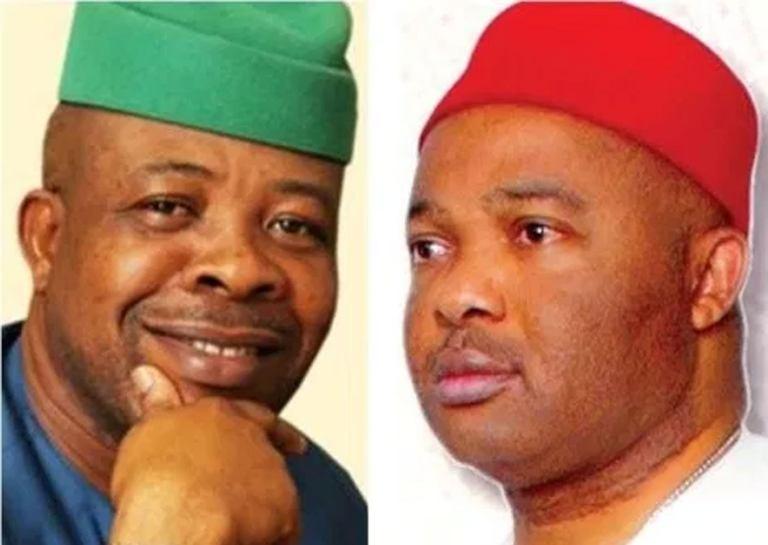 The January 14, 2020 Supreme Court verdict annulled the election of Emeka Ihedioha of the PDP and in his place, named Sen. Hope Uzodinma of APC as the duly elected governor of Imo State / Photo credit: vanguardngr.com
184
SHARES
ShareTweetShare
ShareRepostPinterest

A senior source at the Independent National Electoral Commission (INEC) has expressed concern that the Supreme Court may have relied on uncertified results from some polling units in its judgment declaring Senator Hope Uzodinma of the All Progressives Congress (APC) governor of Imo State.

The judgment given on Tuesday terminated the seven-month-old government of Emeka Ihedioha of the Peoples Democratic Party (PDP). INEC was also ordered to withdraw his certificate of return and re-issue to Uzodinma.

The source, who refused to be named, said, “INEC didn’t certify the results from the 388 polling units. Uzodinma applied to the tribunal which issued a subpoena to the Nigeria Police. A Deputy Commissioner of police tendered what they call the police copies of the results.

“Although rejected by the Election Petition Tribunal and the Appeal Tribunal, the Supreme Court overruled them. It added the figures and declared Uzodinma winner based on the highest number of votes.

“Nothing was said about spread i.e. the requirement that a candidate must also score at least a quarter of the votes in two-third of the LGAs in a Governorship election.

“While determined to carry out the orders of the Supreme Court to issue Sen. Hope Uzodinma, candidate of the All Progressives Congress, a certificate of return as the duly elected governor of Imo State and withdraw the one it previously given to Emeka Ihedioha of the People’s Democratic Party, the leadership of the Independent National Commission is still reeling from shock over the verdict.”

A seven-man panel of the Supreme Court, presided over by Chief Justice Tanko Muhammad, on Tuesday ruled on the appeal filed by Sen. Uzodinma against the election of Ihedioha as governor.

The judgement read by Justice Kudirat Kekere-Ekun sided with Uzodinma, ruling that he proved his assertions that 213, 695 votes he garnered from 388 polling units were excluded from the final results declared by INEC.

But top official of the electoral commission who spoke with the Interview on the Supreme Court ruling explained why they are baffled by the court’s verdict.

According to the source, the results with the 213, 695 discounted votes were not certified by INEC, nor did they come from the commission.

Based on court proceedings, the results allotted to Uzodinma were part of evidence tendered by a deputy commissioner of police, who was classified as Petitioners Witness 54, to the Imo Governorship Election Petitions Tribunal that sat to decide the petition of the APC against the declaration of the PDP candidate as governor.

The deputy police commissioner tendered the results under a subpoena of the tribunal.

But the tribunal and the Court of Appeal dismissed the tendered results as they were not certified by INEC.

The Supreme Court ruled that both courts were both lower court were wrong to say the witness was not the proper person to tender the results.

On allegations that INEC’s negligence compounded the problem, the INEC source said, “Again, it depends on who is making the argument. Was there any request by any of the parties for the original results from INEC?

“The onus was on the person who presented the alternative results to prove they were from INEC, having not been certified by the Commission. None of the other 69 parties and candidates had their own results different from those issued by INEC. The trial court agrees with the Commission.

“By majority judgement, the appeal court also agrees with the Commission. The Supreme Court reviewed the arguments in law and seems not to have physically examined the result sheets.”

The commission is not the only expressing shock over the judgement. Nigerians on social media having a field day point out the inconsistencies and picking holes in the ruling of court.

One Twitter user, @dondekojo wrote, “Just ran the numbers again. According to @inecnigeria website. This is the Total results for Imo. With 823, 743 accredited voters and and 714, 362 votes. With the new number from the Supreme Court, the votes go up to 948k which is > accredited voters. More votes than accredited voters”.

@AbdulMahmud01 wrote, “An entire process fudged by security agencies and INEC created the mess we now see. INEC admitted rigged results at PUs and tried to exclude them at the collation center didn’t show a responsible commission”.