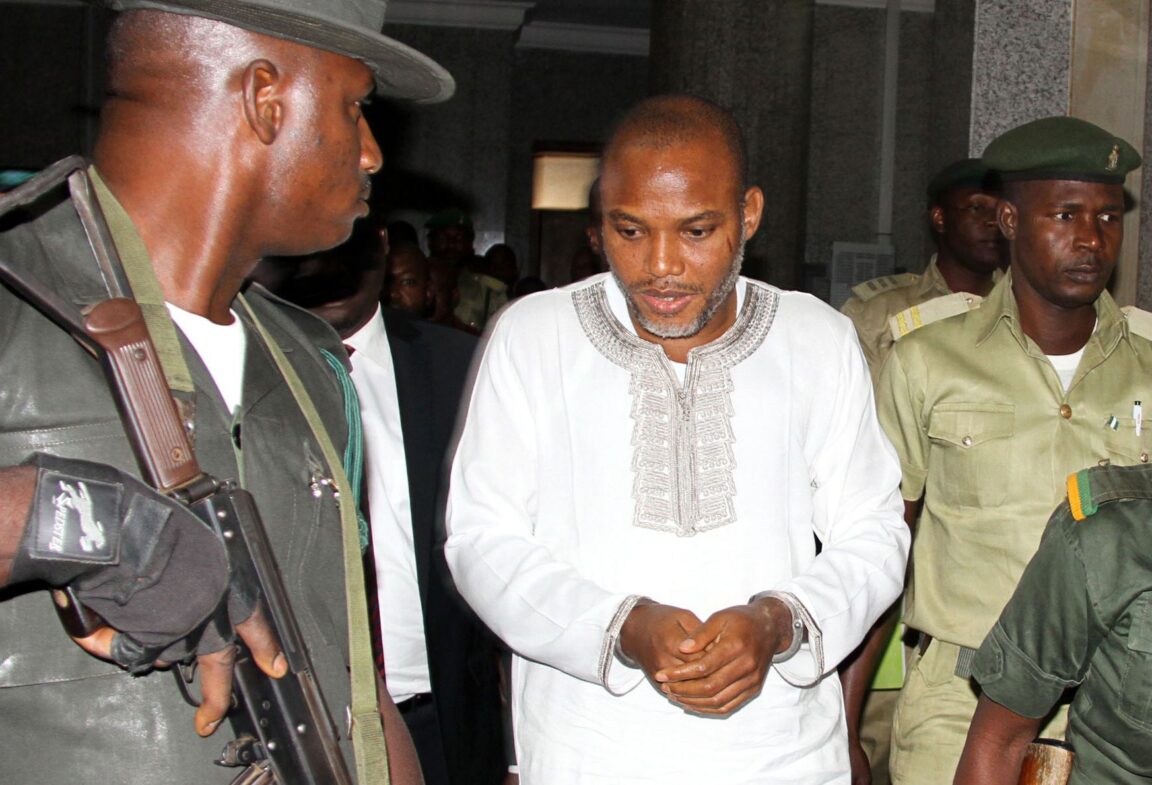 The Attorney-General of the Federation and Minister of Justice, Mr. Abubakar Malami (SAN), has said that the self acclaimed leader of the Indigenous People of Biafra, (IPOB) Nnamdi Kanu has been apprehended by operatives of Nigeria’s security intelligence.

Malami announced this on Tuesday in Abuja at a joint press briefing with the Inspector-General of Police, Mr Usman Alkali.

“The self-acclaimed leader of the proscribed secessionist Indigenous People of Biafra (IPOB), Kanu, has been intercepted through the collaborative efforts of Nigerian Intelligence and Security Services.

“He has been brought back to Nigeria, in order to continue facing trial after disappearing, while on bail regarding an 11-count charge against him.

“Recent steps taken by the Federal Government saw to the interception of the fugitive Kanu on Sunday the June 27.

“He was standing trial on charge of felony, managing an unlawful society, publication of defamatory matter, illegal possession of firearms and improper importation of goods, among others.”

Kanu was granted bail in 2017 by Justice Binta Nyako of the Federal High Court, Abuja but having jumped bail, Nyako, on March 28, 2019, revoked his bail that was granted him on health grounds and issued a bench warrant for his arrest.

Malami said that upon jumping bail, Kanu had been accused of engaging in subversive activities that included inciting violence through television, radio and online broadcasts against the Nigerian state and institutions.

“Kanu was also accused of instigating violence especially in Southeastern Nigeria that resulted in the loss of lives and property of civilians, military, para military, police and destruction of civil institutions and symbols of authorities.”

Malami said that Kanu had been taken to the Federal High Court to continue his trial.

Kanu was arrested on October 14, 2015 and arraigned by the Federal Government on an with 11- count charge bordering on terrorism and treasonable felony.

Meanwhile there was tight security at the Federal High Court as Kanu was brought to court to continue his trial.

In a short proceeding, counsel to the Federal Government, Mr. Shuaibu Labaran prayed the court to remand Kanu in DSS custody, a request which the judge, Justice Binta Nyako granted.

Nyako adjourned the matter until July 26 and personnel of DSS sneaked Kanu out of the court premises.