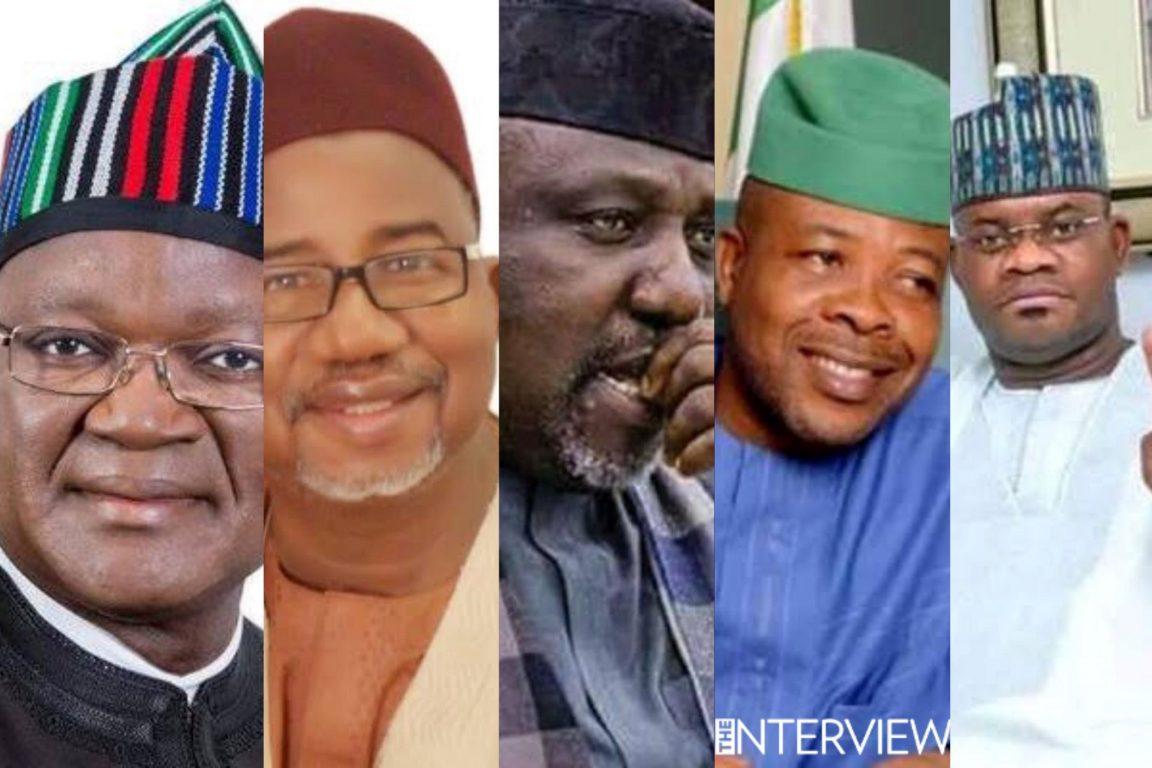 From the look of things, the Class of Governor Ben Ayade’s Olympotic Idiocy may well have a larger collection than was once thought.
55
SHARES
ShareTweetShare
PinShareShareShareFlip

If there was any doubt that governors are underworked and overpaid, this week proved it.

This is not the old, familiar sitting governor vs godfather nasty fight.

It’s a brawl mostly among serving governors of the same party and even the same region, who have no qualms airing their dirty laundry as entertainment.

What started as a sitcom starring Benue Governor Samuel Ortom and his Bauchi counterpart Bala Mohammed in a bizarre farmer-herdsmen exchange, later zig-zagged, morphed, and swept across the country in an expanded theatre of the absurd.

At least four other governors have now been engulfed in the flame.

Ortom set the stage in a no-holds-barred video in which he called out President Muhammadu Buhari for being “soft” on herdsmen and bandits.

He accused the leadership of the association of cattle herders, Myetti Allah, of enabling and arming criminal herdsmen with automatic weapons, while the Presidency turns a blind eye.

As of Wednesday, the Ortom video had received 65,000 views, with a trail of vitriolic comments on both sides, long enough to strangle a herd of trespassing cattle.

Mohammed responded that Ortom was incompetent and irresponsible.

He said if the Benue governor had done his homework, he would have found that some of the Fulani herdsmen were also victims and only carried weapons to protect themselves from cattle rustlers.

Short of accusing Ortom of intolerance, he asked the governor to find a place in his heart for persons from other parts of the country, the same way Benue people are welcome in Bauchi.

As Mohammed was counting his teeth after his bizarre and twisted patronage of armed herdsmen, which a) ignored rampant cases of violent trespass and b) source of the automatic weapons and the legality of their use, the proverbial old woman in Ortom knew that Mohammed’s gesture was aimed at him.

Ortom responded in kind. He accused Mohammed of incitement and warned that the Bauchi governor would be held responsible if any harm came to him.

The two governors, both members of the same party and cousins in the Northern Governors’ Forum, descended into the gutter, with their aides cheering.

While the exchanges between Mohammed and Ortom made headlines – which was precisely what they wanted – it’s also a reflection of how governors, used to endless supply of drama on demand, have perfected the art of milking public frustration to unleash our worst instincts.

And they’re succeeding and diverting attention from their incompetence. Criminal herdsmen – Fulani or not – are a menace and must be rooted out not through the microphone, but by force and intelligence.

But while we’re at it, governors must also do their jobs.

Yet, anyone who wants to know what he has done six years after assuming office will have to be content with the renovation of the palace of the paramount traditional ruler, the Tor Tiv; and the wheelbarrows he distributed to empower the youth as evidence of performance.

Beyond that, there’s not much else to show for an average N4bn which the state gets monthly from Abuja.

He’s still owing salaries and even though teachers now work a three-day week and have to farm to make ends meet, life in Benue, for the most part, is still very hard.

It’s a far cry from what Ortom promised when he first came to power on the platform of the All Progressives Congress (APC) in 2015.

Of course, Ortom can argue, justifiably, that two things have compounded his misery: the politics of George Akume, one of the state senators whom he has accused of diverting every good thing coming the state’s way from Abuja; and the sinister activities of Fulani herdsmen, which he insists have jeopardised farming.

It appears that he would also have to add Mohammed to his list of distractions.

But there’s no need.

Mohammed has never claimed to be anything other than a permanent distraction in public service.

He had a disastrous outing as Minister of the Federal Capital Territory, but since politics rewards the indolent, he has managed to advance to the next level.

Ortom and Mohammed are like Tweedledum and Tweedledee; as far as performance goes, it’s hard to choose one above the other whether in their current or previous lives.

The proxy war between Kogi State governor, Yahaya Bello, and Abia State Governor Okezie Ikpeazu over the role of champagne in public administration tells yet another depressing story.

How a discussion about Safe School Initiative on the floor of the Senate could descend into name-calling and bitter insults among proxies of the two governors is a reflection of the dangerous reach and egregious influence that governors have in our politics.

But the story that takes the cake for travesty is the Sunday drama between Imo State Governor Hope Uzodimma, and former Governor Rochas Okorocha.

Only a few months ago, both men were on the same side, united against a “common enemy”, Emeka Ihedioha, who was then governor.

As soon as Uzodimma and Okorocha toppled Ihedioha and retrieved their daggers from his back, most observers knew that Ihedioha’s ouster was only the end of the beginning: Imo is not big enough to contain the ego and vanity of the two men.

What played out on Sunday was largely a territorial war, even if it was executed in the name of saving the people from Okorocha’s matchless greed.

For eight years in Okorocha’s Imo, the only oasis of prosperity was the Okorochas.

The man helped himself to whatever he fancied.

Whatever he could not take for himself, he took for his daughter.

From the look of things, the Class of Governor Ben Ayade’s Olympotic Idiocy may well have a larger collection than was once thought

Whatever he could not take for his daughter, he took for his son-in-law.

And whatever he could not take for his son-in-law, like the awe-inspiring world-class leisure park, called the Royal Palm Estate, he took brazenly for his wife.

Uzodimma knew of this sordid record, but politics being politics, he still went ahead to forge a marriage of convenience with Okorocha and Ifeanyi Ararume to topple Ihedioha.

Now, all three conspirators, who are also members of the same party, can’t see eye-to-eye.

Okorocha is on his way to exile from the APC, while Ararume remains in political limbo, fenced off from his senatorial ambition by Uzodimma’s deadly insecurity.

That drama on Sunday about the sealing of Okorocha’s wife’s leafy playground, and the video of the former governor’s brief arrest by the police mean nothing beyond Uzodimma’s personal gratification.

A government that is really serious about holding its predecessor to account, in the interest of the public, knows what to do and how.

The next time you’ll hear about Okorocha’s wife or any of the priceless jewels the man appropriated for family and friends, is when he crosses Uzodimma’s line again.

Any other sin would be forgiven, but the full price for this one is saved for another day.

That’s the way our politicians play.

That’s the way the governors roll.

One day, they condemn bandits and banditry, and the next they say there’s absolutely nothing wrong inviting bandits to lunch or even paying them handsomely to keep us safe.

We’re not fooled by this attempt to give delinquency a new name.

We know these folks are members of different factions of the same party.

And from the look of things, the Class of Governor Ben Ayade’s Olympotic Idiocy may well have a larger collection than was once thought.