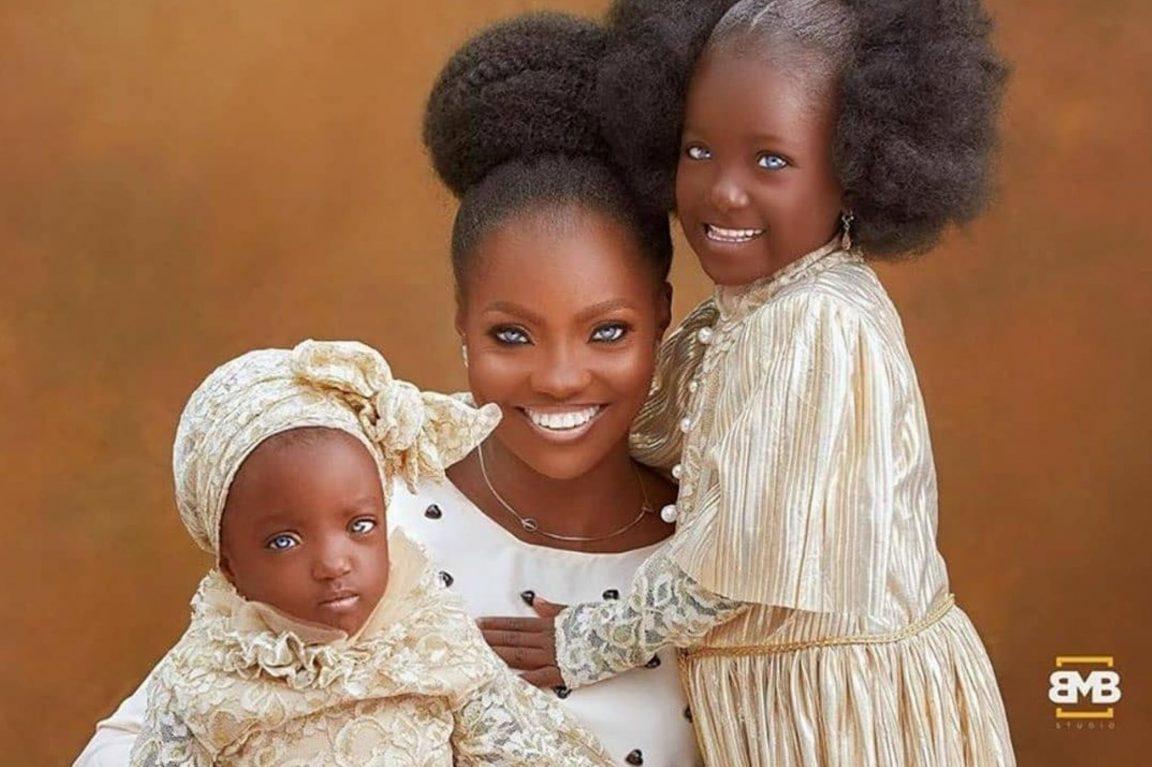 Risikat Azeez, a 30-year-old mother of two and her daughters, who were allegedly abandoned by her husband and father because of their blue eyes have suddenly become celebrities because the rare colour of their eyes / Photo credit: face2faceafrica.com
372
SHARES
ShareTweetShare
PinShareShareShareFlip

It appears Nigerians are on to our next Cinderella story.

This time, it’s all about the blue-eyed wonder recently discovered in Ilorin, Kwara State.

Risikat Azeez, a 30-year-old mother of two and her daughters, who were allegedly abandoned by her husband and father because of their blue eyes have suddenly become celebrities because the rare colour of their eyes.

True, the excitement of it all is understandable.

Blue eyes are a rarity in our clime. You only find them among our celebrities and fashionistas who acquired them from contact lenses.

But the sensationalism we have seen so far is utterly unnecessary.

But before Madam Azeez is completely swept off her feet by the emergency directors and producers of this next chart bursting Nollywood movie, I wanted to remind her about a certain woman known as Olajumoke Orisaguna aka Olajumoke Onibred.

Olajumoke’s only claim to fame was accidently walking into a photo shoot session of British rapper, Tinie Tempah, by Nigerian photographer, TY Bello, for Nigeria’s ThisDay Style, while she was hawking bread on the streets of Lagos.

We were all here, minding our business when we were told that Olajumoke was our own 21st Cinderella. It was a fairytale and who doesn’t like a fairy tale? We all lapped it up like hungry dogs and even asked for more.

Consequently The Olajumoke Franchise was stretched beyond its limits and almost ventured into the realm of absurdity.

Before we knew it, she became a motivational speaker, a model, ambassador for different brands, a social media sensation and a show presenter.

In fact, she became everything.

But in the end, like all fairytales, it turned out to be an illusion.

The life we all have known isn’t wired to work that way. You don’t build something out of nothing no matter how much you wish for it.

READ ALSO: Success Adegor: When Free Education Is Not Free

Everyone ignored the foundation and kept dressing her in borrowed clothes until the woman within practically collapsed under the weight of the whole charade.

Today, we don’t hear about Olajumoke anymore. A visit to her twitter page showed that the last time she posted was in 2019.

Risikat Azeez, a 30-year-old mother of two and her daughters, who were allegedly abandoned by her husband and father because of their blue eyes have suddenly become celebrities because the rare colour of their eyes

The play had long ended and everyone; producers, cast and audience have all left the theatre to face the real life and its inevitable demands.

It is what it is.

We were all awed by her confidence as she expressed her indignation over being sent out of schools for unpaid schools.

Perhaps, if we had paused just a little bit, paid more attention to that confidence that was almost bordering on impudence, we might have proceeded differently.

But no, we celebrated the little girl, her not-so-subtle impudence and all, and rather than address her issues from the root, we turned her into a fairytale princess, overnight.

And so, Success also became a model. Pictures of her in adult hairdos were all over the Internet and stories of her travelling to the United States on a modelling contract became widespread.

When a non-governmental organisation that caters for indigent pupils reached out to see how they could work with and mentor her, they were asked to go through an agent.

Yes, Success now had an agent. Her fame had to be managed.

But where is Success today? Her life, as we saw during her regrettable outbursts recently, obviously hasn’t gotten any better.

Her choice of words and the vehemence with which she used them showed a child that needs serious training and mentoring.

But she was abandoned to the wolves.

Let me say it plainly here, fame on its own can never be a cure for poverty. As a matter of fact, gaining any kind of fame without being equipped for it with the right foundation is a sure recipe for poverty and misery.

But who will make our people understand this without coming across as a spoilsport?

No thanks to some our religious leaders and their relentless preaching on ‘unmerited favour’, many of our people’s heads have been messed up in no more small way.

Many of us now believe that something can come from nothing and that you can indeed not only build castles in the air but will actually be able to live and thrive in them.

That’s why Olajumoke who could barely confidently string two words of English together was labelled a motivational speaker overnight and she believed it.

That’s why Success’s parents who had been married for many years spent money on a wedding they didn’t need.

Favour had found them and who were they not to act the part?

So, when I was saw the vans move in once again, the professional makeovers and photos of the blue-eyed mother and daughters, I knew we were again on a path well-trodden but which leads to nowhere.

A woman and her two daughters were reportedly abandoned by her husband and you think what she needs more at the time is an extreme makeover and photoshoots?

You dress her and her little girls in borrowed robes, expose them to all sorts of eyes just so the world could applaud a transformation that doesn’t go beyond the surface.

We hope this time whatever help comes her way would go beyond the cosmetic and the usual photo optics and address her real needs.

She and her daughters will need to live and also thrive even after the curtains on the current drama are drawn.

What she needs now most is economic empowerment and not a front-row seat in a contrived low budget Project Fame,