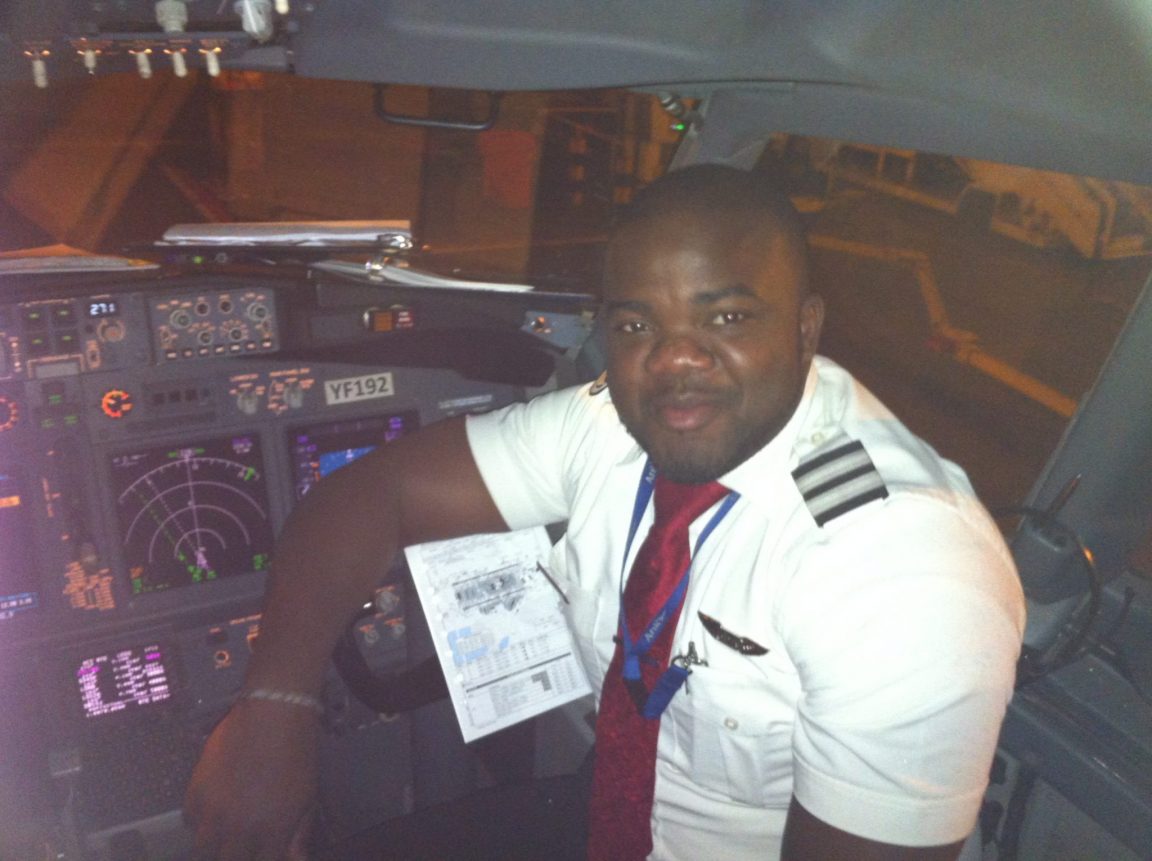 (We were the first to interview Captain Odujinrin, in April last year, near the final stages of his histoic flight. Enjoy this throwback)

Captain Lola Odujinrin is the pilot set to embark on the history-making solo round-the-world flight, billed to originate and terminate in Africa. The project has the theme Transcend – One Man! One Plane! One World! The planned trip will start from Lagos, Nigeria and take him over Central Africa, the United Arab Emirates, Asia, the United States of America, Canada, the United Kingdom and Iceland, and then back to Africa and Lagos via Algeria and Niger Republic. The adventurous pilot shares his vision and plans with The Interview.

How did the idea of a solo round-the-world flight start?

It started with a childhood dream, way before I knew what it took or what a flight around the world was all about. This dream then became achievable in my mind, due to my exposure to flying at an early age.

The Project is called Transcend – One Man! One Plane! One World! Why?

To transcend means to rise above, pass beyond the limits of a category or go beyond the normal limits of something. In our case, of what is expected from an average African in terms of exploration and adventure.

You left Nigeria as a teenager and have spent much of your higher school and work life in Britain. Why have you chosen Nigeria to launch this mission?

First of all, this has already been achieved in England. Nigeria as a launch pad will create greater awareness and exposure for most African children, as it will be a first of its kind.

Was there anything in your growing-up years before you left Nigeria that may have suggested to you that you would be taking on this mission today?

I was a curious and adventurous kid. My Dad flew to many countries and would buy me all sorts of toys, which I would dismantle and try to put back together again. This inquisitive nature fostered the passion and determination that made me believe that I could do a lot of things, if I put my mind to it.

What was your wife’s first reaction when you told her you wanted to be the first African to fly solo around the world?

She was not surprised at all, as she met me on a power bike and flying aeroplanes etc.

And your siblings? Is there an adventurous gene in your family?

Yes, my brother loves outdoor adventures and my sister drives a train for a living.

What processes were involved in choosing the right plane to use for this sort of expedition?

Choosing the plane was a most careful task to do and we consulted a few experts in the industry. Aircraft payload, speed, fuel burn and max flying altitude were major considerations. The procurement of the aircraft took the best part of nine months.

Where did you get the plane?

We looked at aircraft in Germany, the UK and Spain, but decided to go with one in the United States of America.

You said you want to change the world’s perception about Nigeria. What was your experience as a Nigerian while visiting the US to choose the aircraft?

It was quite hilarious as at first, we were described as scammers wanting to buy aircraft. A major challenge was that we were not taken seriously until we had deposited a fair amount of money into an escrow account. Generally, people were surprised that we were doing this, because it is not what Nigerians are known for. Having said that, once it was determined that we were fellow enthusiasts, a surprising amount of help and support was given by these same individuals.

Tell us about the aircraft; is there anything special about it?

The aircraft is fairly modern and made of composite material, which means it is slightly lighter than earlier models. It has a very powerful engine and relatively low fuel burn. It is the only aircraft with a manufacturer’s parachute to bring the aircraft down safely in the unlikely event of engine failure. Our plane has been modified with a long-range tank to keep it airborne for 17.5 hours and equipped with an HF radio. We also have one or two classified modifications known only to the Transcend team. The aircraft is named Chloe.

You have been training in the UK for some weeks now; what part of the training do you hate most?

Dieting; not being able to eat as I wish.

Is there any part of the training that will be done in Nigeria before the trip?

No, all training is now complete, apart from physical training.

Which Nigerian pilots are working with you, if any?

It’s a solo flight, but I have had a friend called Haruna Usiju Gadzama come to the USA to do some initial aircraft tests with me. There are also a few colleagues that have shown support in other areas

How is this mission being funded? Given the current economic challenges in the country, have you have been able to get sponsorship?

The mission is funded through corporate sponsorship and the current economic situation has made it extremely difficult to raise adequate sponsorship. The first and most crucial financial contribution to this dream was by the Tolaram Group and Translynx Nig Ltd, who provided the necessary impetus to embark on this challenge. However, there is still a huge funding gap and we are hopeful that more Nigerian companies will believe in this feat by supporting financially and making it a reality.

What will be on your mind on D-Day? Have you had any moments of doubt or fear?

Fear is a natural part of life and I have had numerous doubts. However, this is what Transcend stands to epitomise; that is to rise above all these difficulties. I guess on D-Day, it will be too late to think. I will have to face it like a man.

Why do you think that only 114 pilots have succeeded at this kind of mission since 1933?

A solo round-the-world flight is very difficult and complex in nature. Some of the challenges include the physical state of the pilot, the diversity of the weather in different regions, the pilot’s experience, coping with ever-changing time zones and fatigue due to flying at high altitudes in an unpressurised vessel for long hours, the loneliness of solo flying and technical glitches. Unlike commercial flying, there are no mandatory rules that govern a pilot’s rest periods on a solo round-the-world flight and all activity relating to safety and operation of the flight has to be conducted solely by the pilot. Adequate planning is therefore the key to a successful mission, with sufficient financial aid.

The first aviator to accomplish the solo flying feat, Wiley Post, completed his trip in seven days in 1933. Why is your trip going to take 42 days?

There are Fédération Aéronautique Internationale (FAI) rules that govern round-the-world flights, in terms of speed and time.

The minimum distance to be covered for such a record must be at least equal to the length of the Tropic of Cancer, that is, 36,794 km (22,863 miles). Wiley Post flew approximately 15,000nm at higher latitudes and not touching some continents. Team Transcend are not interested in breaking any speed records. Our mission will be taking us into the Northern and Southern hemispheres and touching on at least five continents, thereby significantly adding more distance than Post’s flight. We also aim to educate and inspire the youths whilst raising funds for charity during this mission.

How will Nigerians and people around the world be able to follow your flight?

There will be several ways including links to trackers, social media, a phone app and various existing aviation tracking websites. Instructions on tracking will be made available closer to departure time.

With less than a month to your flight, would you say Nigerians are rallying round your mission?

Yes, but we need more people to get involved.

What do you think this means for Nigeria?

I think it will inspire and restore hope, especially in these trying and difficult times.

Each of the 114 aviators who succeeded had their own peculiar story, even though a sense of adventure was common to all. Which of these success stories do you find particularly fascinating and why?

The earlier aviators’ stories, as they had very little to work with in terms of aircraft and survival equipment. Also, navigation was much harder before the advent of GPS navigation. I also find the latter aviators fascinating with the very limited amount of experience they had before embarking on their missions.

With 4000 flying hours in your kitty and a good job as a commercial pilot, why are you taking this risk?

As my favourite saying goes, you can only truly chase a dream when you are prepared to sacrifice the world for it. Furthermore, without exploration, there would have been no mobile phones or development in our world today. It’s time Africans too see themselves as pioneers and frontrunners. This is mostly to inspire the youths to see themselves in a leading light.

Do you think there’s any reason why no African has attempted this trip before now?

No reason in particular, but it is fair to say that Africa is now considered globally as an emerging market and feats like this epitomise our thirst for recognition, ability and success.

What will you be thinking about as you commence your voyage?

Taking each leg as a challenge, one at a time.

What will be your first words when you return?

Not sure. It’ll depend highly on my experience en route.

I train twice a day by doing cardiovascular exercises in the morning to improve alertness and attending various gym classes in the evenings. I recently started reading some aviators’ biographies as a form of research and inspiration.

Do you watch Nigerian movies? Who are your favourite actors?

Yes I do watch a few Nigerian movies and one of my favourite actresses is Funke Akindele. My wife and daughter love her too.

What is your impression of the state of aviation in Nigeria today?

There have been many improvements over the years and there are still areas that can benefit from modernisation. Nigeria is the centre of economic activity for West Africa and perhaps has the largest economy in Africa today. Nigeria, with its position geographically and economically, can very easily become the aviation hub of Africa.

You are a native of Ogun State; is your state governor, Governor Amosun aware of what you are doing and if not, do you intend to meet with him before your flight?

I believe the team is making efforts to inform the Governor and it is envisaged that I will be paying him a formal visit before I depart on my mission.

What will be next after you return?

A few things are still at conceptual stage and all we can say at this stage is, watch this space.