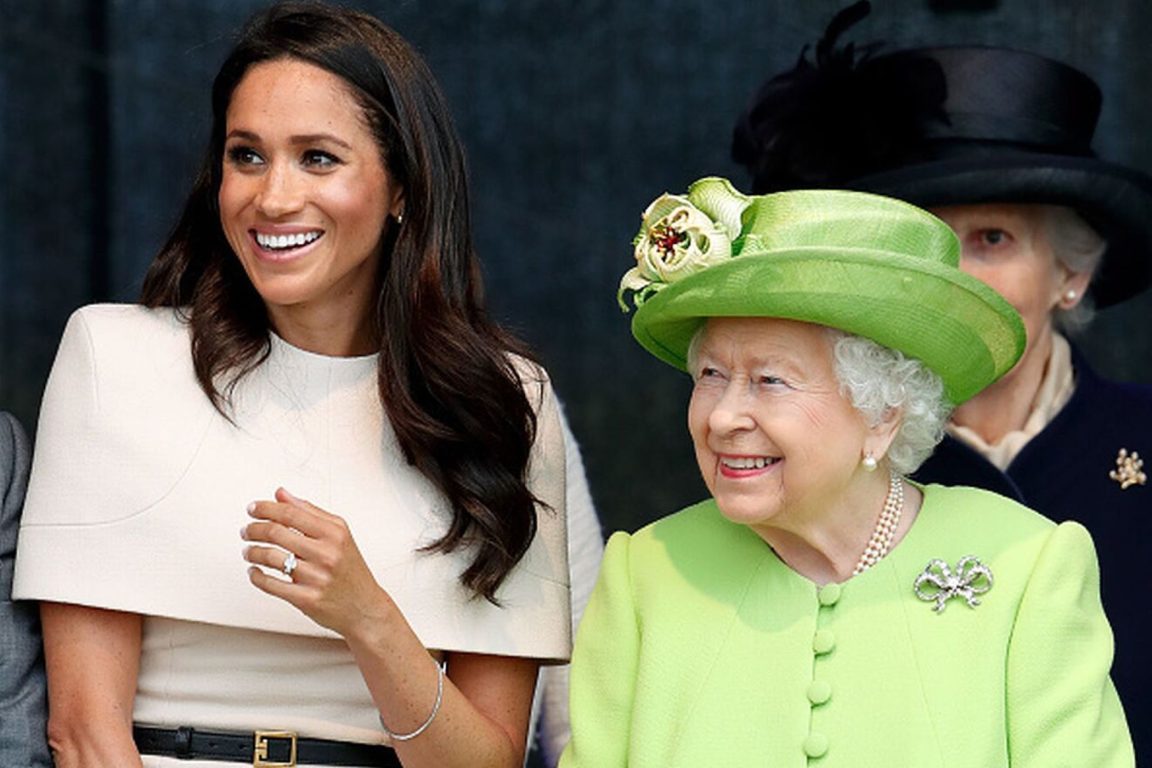 The only thing that compares in recent tweet villainy with the post of US-based Nigerian professor Uju Anya on Queen Elizabeth II, was perhaps the visit of the Duchess of Sussex, Meghan Markle, to the Windsor Castle.

Yet, after her ordeal even Anya is back, recuperating from the injury inflicted by the hounds and five days in Twitter jail.

If large sections of the British press needed any proof that Meghan killed the Queen her Saturday visit to Windsor confirmed it.

There is no need to question how.

About three weeks ago, the Duchess started a Podcast, Archetypes with Meghan.

It’s a personal, chatty rendition of her odyssey, a tour of her growing up years and how she became the woman she is today.

Except if you were born with a silver spoon like the Saints of Fleet Street, you probably have a story like Meghan’s – messy, complicated and happy, with all the ups and downs – just plain human stuff.

It’s all there in the three episodes of Archetypes so far released by Meghan.

I never knew such stories could hurt a fly until I read a vile jab by a British journalist that said Meghan’s Podcast which she started only in August could have complicated the Queen’s misery in her final days and perhaps led to her death.

In case you didn’t listen to any of it, the first episode on Spotify was about Serena Williams and the double standards women face when they’re labelled “ambitious”.

The second was about Mariah Carey, whom she calls the “grand dame of our time”.

And the third and final episode on September 6, two days before the Queen died, was a conversation with Mindy Kaling about the stigmas, joys and challenges of her life as a single, unmarried woman – the singleton, as she calls it.

Of course, we all know Meghan – the divorcee from a mixed race who is three years older than Prince Harry.

We know Meghan, an actress who has seen a bit of the world from California to Johannesburg and from Vancouver to Buenos Aires.

We also know that the Windsors never quite liked that 2021 television interview hosted by Oprah Winfrey featuring Meghan and the Duke of Sussex, Harry.

Of all that happened on that eventful day and the scores, if not hundreds, that Meghan and her husband met and greeted and shared a moment with, what got the mojo of the editors at Daily Mail going was one woman in the crowd who refused to shake Meghan’s hand because she seemed unhappy with her attendance

She’s not exactly a piece of royal decoration and has never pretended to be.

How sharing the story of her life – the lived experience of millions in her position – has become the death of the Queen, takes the Megxit obsession in the British press to a whole new level.

For nearly three days this week, #GoHomeMeghanMarkle was in trend.

And it all came to a head on Saturday when Meghan and Harry, in company with the Prince and Princess of Wales Williams and Kate, had a walkabout to greet crowds gathered to mourn the Queen outside Windsor Castle.

Of all that happened on that eventful day and the scores, if not hundreds, that Meghan and her husband met and greeted and shared a moment with, what got the mojo of the editors at Daily Mail going was one woman in the crowd who refused to shake Meghan’s hand because she seemed unhappy with her attendance.

It was just the moment Megxiteers were waiting for.

They made a song and dance of that awkward moment, all of which was to confirm, among other things, that this Witch of Windsor indeed killed the grand old Queen.

The Mail, leading the pack, reminded us of how the monarchy may have been saved by a last-minute decision to exclude Meghan from family members who gathered before the Queen’s death was formally announced at Balmoral.

And even King Charles III, the new successor to the throne, has not exactly been Mama’s good boy in recent times, has he?

Meghan had initially set out with Harry, but when it dawned on Prince Charles that her presence could impede the Queen’s Flight of Bliss, Harry was advised to leave his wife behind.

Even in what was supposed to be a moment of shared family grief, Meghan just couldn’t seem to do anything right.

No one was prepared to cut her some slack or find a place in their hearts to grant that this woman had just lost her grandmother-in-law, too.

As journalists assailed her in print and special TV shows, she was not spared in the tweetosphere.

“Meghan Markle’s own father,” one @SylvSnopsis said, “nearly died of a stroke and she hasn’t even bothered to call him…watching her swan around Windsor shaking hands and pretending to be sad after making the Queen’s final years a misery is sickening.”

Oh wow! If Meghan called her father in distress, would she have been obliged to inform this tweep and perhaps also ask for advice about a good time for the next chat?

It’s useless to pretend that Meghan did not have a difficult relationship with the Queen or that she may not have underestimated her bargain when she agreed to marry into one of the world’s most traditional and conservative families.

As I’ve said elsewhere, the Windsors were not expecting Rachel Zane of Suits, certainly not after Diana.

But Meghan is not Kate Middleton and she never pretended to be.

All this nonsense about Meghan being the death of the Queen by trashing the monarchy and complicating the Queen’s misery in her final years conveniently ignores the less than inspiring lives of other members of the royal family in that time.

Prince Andrew has been involved in all kinds of controversies from allegations of receiving dodgy payments for a passport application from a Turkish millionaire and being friends with Ghadaffi to being a pedophile.

In fact, the last one which outraged rights groups around the world, forced the Queen to strip him of all royal duties.

On a misery scale of one to ten, I’m not so sure where that stands in comparison with Meghan’s obstinacy.

And even King Charles III, the new successor to the throne, has not exactly been Mama’s good boy in recent times, has he?

Only in June, when the Queen could have used some good news about the royals, Charles collected bags of cash containing about three million euros from a Qatari politician during a meeting.

The money was apparently for charity causes, but the sight of the heir apparent hauling bags of cash from the Qatari sheikh could hardly have made the Queen proud.

Meghan hate is not a deep-rooted British sentiment reserved for an American brat who does not know her place and doesn’t care.

Nor does it make sense behaving like folks from my neck of the woods who would say, even at the passing of a 120-year-old, that “the enemies have done their worst.”

The attacks on Meghan are coordinated and targeted for reasons which her attackers find convenient to deny.

In 2021, Bot Sentinel, a Twitter analysis service, reported that more than 114,000 tweets about Meghan and Harry revealed a campaign of targeted harassment and 83 accounts were responsible for approximately 70 per cent of the negative content.

The service also found that the majority of the hate and misinformation about Meghan and Harry originated from a small group of accounts with the same purpose – to tweet negatively about the couple.

This time, however, the hate appears to be fuelled by something darker – the fear that Harry’s forthcoming book – read Meghan-instigated onslaught – could be a tell-all on the monarchy, especially the Queen’s era.
Although the publication was due in November, after the Queen’s death, Daily Mail quoted sources that it could be delayed beyond Christmas.

The press has continued to fuel suspicion that it could well be the book that finally destroys the House of Windsor.

But it’s just what it is for now – suspicion.

The Queen lived a good, full life – one that despite its joys and pains was by no means less revolutionary by the standards of the time.

She was the first monarch to allow her coronation to be televised live and the first to create equality in succession, eliminating generations of testosterone-driven patriarchy.

These changes were just as extraordinary as those added on by Princess Diana upon which Meghan is laying her own unique bricks.

Diversity, even iconoclasticism, need not be such a bad thing.

Whatever may have been the Queen’s frustrations about how her children, grandchildren or in-laws turned out are common to all parents, as I’m sure Meghan and Harry would find when their own children come of age.