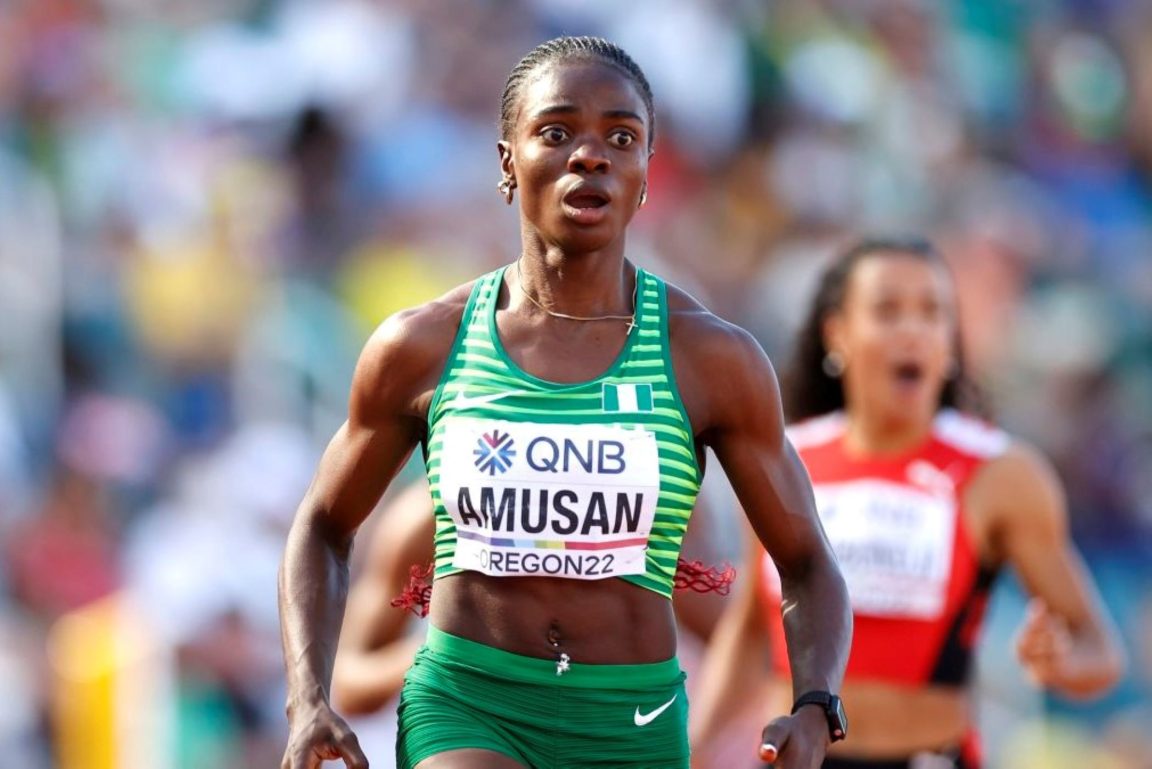 When a proud Oluwatobiloba Ayomide Amusan climbed the podium in faraway Eugene, Oregon in the United States, as the World Champion in Women 100m Hurdles, not a few equally proud Nigerians mounted with her in spirit.

She had just set a new World Record at 12.12s breaking keni Kendra Harrison’s 27-year record, and leaving legend Michael Johnson wondering how she did it.

Whether from their living rooms in Canada, in the consulting rooms of UK hospitals, or even on the streets of Indonesia, where they have all migrated in search of the good life that had eluded them in Nigeria, in those few moments we were all Nigerians.

We were all with her on the podium.

In that brief moment when Nigeria’s National Anthem was played for the entire world, our Nigerian-ness was not in doubt.

Then the Commonwealth Games started a few days later in Birmingham, UK and our star girl repeated the feat.

Along with other Nigerian girls, she reminded the world of the greatness that is in and of Nigeria, despite the odds.

Before the games started, the team found as it was in the Commonwealth Games in Glasgow eight years ago, and even in the Tokyo Olympics, too, that the officials had forgotten the team’s kits.

Make no mistake about it, Nigeria has everything it takes to be great and occupy a front row seat among nations as a world leader.

It was between 2016 and 2018 that she got the greatest boost her career needed, and that didn’t come from the Nigerian government

We all know it, even if it’s unfortunate that Tobi, just like many others before her could only truly display that greatness in spite of, rather than because of Nigeria.

Her parents who are school teachers in a country where teachers are worth 10 for a penny could never by any stretch of luck afford an education in the University of Texas, El Paso, where she met her current coach, Lacena Golding-Clarke.

Listening to her during an interview she granted at UTEP in 2018, Amusan made it clear that she couldn’t have gone far without the athletic scholarships from the American university and her coach, who is also a three-time Olympian for Jamaica.

Yes, it’s true that the President of the Nigeria Olympic Committee (NOC), Habu Gumel, has come out to say that Amusan is one of the Nigerian athletes on the sponsorship of the Olympic body with some annual stipends since 2018 till date.

But that only came two years after her UTEP’s scholarship. As a matter of fact, she went Pro in 2018, which means that though she was still taking courses at the University toward her degree in Health Promotions, she was no longer competing for UTEP.

It was between 2016 and 2018 that she got the greatest boost her career needed, and that didn’t come from the Nigerian government.

Nevertheless, her win is for her, as well for Nigeria and Nigerians.

But typical of Nigerians and our penchant for always searching for thorns even among de-thorned roses, we have managed to make Amusan’s glorious win another moment of national homicide.

The tears that involuntarily ran down her face while the Nigerian National Anthem was on hadn’t even dried before the ugly divisive theories took over.

On the one side are those who have obviously ruled out any goodwill towards this country and so the best they could do was to link her tears to everything that has gone wrong with Nigeria.

You would think Amusan had written a speech and handed it over to them to disseminate. Yet, every single word came from their own already poisoned selves.

Of course it isn’t difficult to understand this almost suffocating bile and its roots. But how do despair and spreading apocalyptic theories make the country any better?

Then, on the other side are the government apologists, career ostriches who have long unashamedly forgotten their heads in the sands of a clueless and rudderless leadership that has bedeviled this country for a while now.

They think Amusan’s win is another reason to sneer at those they have labelled as this administration’s detractors.

To them, Amusan’s win is another sign that Nigeria is doing well and would get even better if only the critics stopped calling out this government at every turn.

They always wait for these blue moon appearances on the world stage to gloat about their pseudo-patriotism and the rest of the boloney, that even they themselves would ordinarily find hard to keep down, if their outlook hadn’t been so coloured by illogical self-preservative tendencies.

The truth they know but prefer to overlook is that for every Amusan out there mounting world podiums in Nigeria’s name, there are countless other athletes who have since given up and would proudly wear the flags of other countries in their moments of glory.

For instance, in 2016 about 10 Nigerian athletes were at the Rio Olympics for other countries. This was repeated during the last Olympics in Tokyo, Japan in 2021.

During that Olympics, while only Blessing Oborodudu and Ese Brume were the only athletes that won medals for Team Nigeria, at least 10 Nigerian athletes played for other countries like Japan, USA, Italy and Norway during the games, with some of them winning medals for those countries.

And, really, no one blames them because the Nigerian government’s poor treatment of Nigerian athletes – and its professionals in general – over the years isn’t some secret tucked away in hidden files; it’s always displayed at every opportunity.

The unfortunate result is there for all to see.

Just a few days ago it was disclosed that the UK’s General Medical Council had licensed at least 266 Nigerian doctors in June and July 2022.

And that’s for a country that has long fallen short of the United Nations and the World Health Organisation’s recommendation of one medical doctor to 600 patients.

According to a recent report by the ICIR, only four doctors are available for 10,000 patients as at 2022, and this is even said to be the best in the last four years.

That’s the same country that has allowed itself to lose three doctors daily to the UK just between June and July.

In August 2021, armed operatives of the State Security Service were reported to have gone to Sheraton Hotel in Abuja to disperse Nigerian doctors who were arriving for an interview for medical positions in Saudi Arabia.

The current trend of brain drain in Nigeria cuts across professions, especially among the younger population.

That Amusan and some of her colleagues haven’t abandoned Nigeria isn’t because of Nigeria and we must never become so deluded as to think so.

And that’s what we should celebrate; her win, her strength, her skills and her patriotism, which has proved real and true.

The performance of our athletes in Birmingham should remind us of millions of Tobi Amusans pining away in the crannies of our country, the same country that produced and nurtured world class athletes from Emmanuel Ifeajuna to Richard Ihetu (Dick Tiger), and from Chidi Imoh to Sunday Bada and Falilat Ogunkoya, among others.

Turning Tobi Amusan’s golden feat into another opportunity for needless propaganda or spreading bile all over an already fragile country would be a major disservice to this great Nigerian young woman.

It would also be a great loss of a teachable moment for us all.

When the official chest-thumping is over and hopefully some shame and modesty return, the government should decide to henceforth do all it can in the short time remaining to nurture and retain every Tobi Amusan out there, not just in sports, but also across all professions.