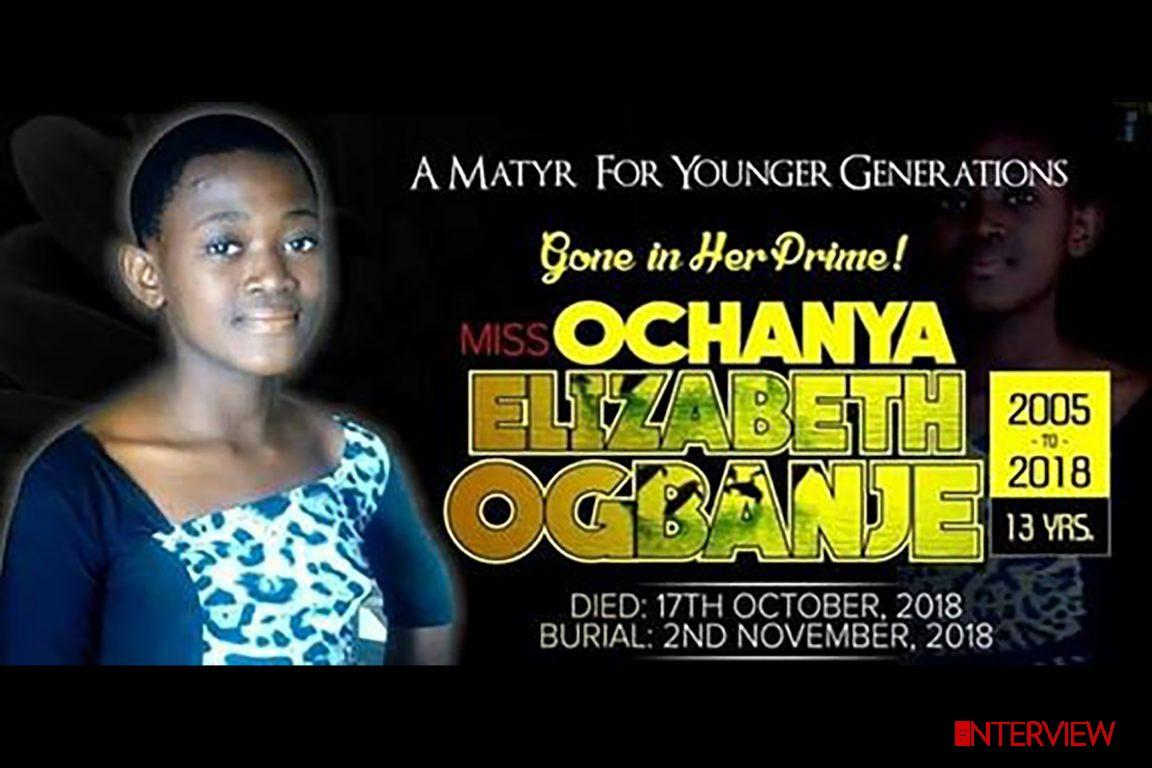 Ochanya was serially and brutally raped by her 54-year-old uncle and his son for five years till she died of complications from VVF at 13 / Photo credit: LIB
852
SHARES
ShareTweetShare
ShareRepostPinterest

Ochanya was the 13-year-old pupil of Federal Government College, Gboko, Benue State, who died a horrible and totally avoidable death one year ago.

She was literally raped to death.
Ochanya, the last of 11 children, in search of quality education was compelled to leave the comfort of her parents’ home in Ogene-Amejo village in Okpokwu local government area of Benue state, to Gboko in order to stay with her aunt and her family.

She was forced to make this move because the only public school in her community, not far from her home, had been shut since 2011 due to non-payment of teachers’ salaries.

The school which was founded in 1976, was in such state of disrepair that what was left of it were broken walls and badly torn roof.

So, in 2012, when she was just seven, Ochanya started living with Mr. & Mrs. Andrew and Felicia Ogbuaja and their five children.

That was straightforward right?

Well, it should be. However, in Ochanya’s case it wasn’t quite that simple. For her, it became the proverbial journey of no return.

It was only months after she began living with the Ogbuajas that Victor, the couple’s eldest child began to rape and sodomise her.

One fine day while Victor was engaged in his new favourite pastime of raping Ochanya, his father, Andrew Ogbuaja, a 54-year-old lecturer at the Benue State Polytechnic, Ugbokolo , came upon them in error.

He reportedly scolded his son and sent him out. But from that day Ochanya’s torture rather than being alleviated, became double.

The 54-year-old Ogbuaja decided to join his son in violating Ochanya who had now turned eight.

Just imagine if the Benue State government had been responsible enough to pay the teachers of Ochanya’s home school their salaries. That girl had no business leaving the comfort of her parents’ home at such a tender age. But the state government did what almost every Nigerian leader knows how to do best – shirk responsibilities – and here we are

It wasn’t long before the gross violation of her young body took its toll, as the poor defenceless girl came down with Vesicovaginal fistula (VVF), a horrible health condition that saw her leak urine and feaces uncontrollably. As months went by her health kept deteriorating as she became a frequent visitor in the hospitals.

She even had to wear diapers.

For five years Ochanya bore the pain and shame of her condition till she couldn’t anymore.

I needed to narrate just a bit of the Ochanya’s story above so we all remember what unspeakable pains and agony that girl had to go through before her frail body finally gave up the fight.

And so, Ochanya left.

She left and with her left the many dreams and aspirations of a hardworking and bright-eyed girl!

With her also left the joy and hope of her poor parents, whose only obvious crime was probably to support their daughter’s dream and taking steps help her actualise them.

But she also left behind a nation in total outrage.

She also left with us all a certain deep shame and guilt that we allowed it happen in the first.

But there is also a chance at redemption and that is the only way Ochanya’s senseless death would make any meaning in the end.

Now, Ochanya’s death was a failure of different entities on different and multifaceted levels.

Just imagine if the Benue State government had been responsible enough to pay the teachers of Ochanya’s home school their salaries. That girl had no business leaving the comfort of her parents’ home at such a tender age. But the state government did what almost every Nigerian leader knows how to do best – shirk responsibility – and here we are.

Just like the Chrisland School, teacher, 47-year-old Mr. Adegboyega Adenekan, who has just been sentenced to 60 years in prison for sexually violating a two-year-old child in his school, Mr. Andrew Ogbuaja who is now standing trial shall also receive his due wages

Part of the shame and guilt of Ochanya’s death will always lie with the Benue State government and the way they can redeem that burden isn’t just rehabilitating that one schools and ensuring its teachers are paid and go back to the classrooms.

They must do part of what they are elected and paid to do; ensuring the schools and teachers in the state are in top shape. No other child should ever have to leave their homes for the reasons Ochanya did.

Ochanya’s aunt also failed her. Like many Nigerian women she chose her marriage over the wellbeing of her young niece. We have since learnt that she knew what was going on but did nothing to save a child kept in her care.

The Nigerian society also failed Ochanya just as we continually fail others in her situation for as long we remain quiet in the face of atrocities we see daily around us.

Last week marked one year since Ochanya left, in pains. A year is gone as we all wait for justice.

Just like the Chrisland School, teacher, 47-year-old Mr. Adegboyega Adenekan, who has just been sentenced to 60 years in prison for sexually violating a two-year-old child in his school, Mr. Andrew Ogbuaja who is now standing trial shall also receive his due wages.

His son, Victor, who’s been on the run since Ochanya’s death, shall, someday soon, face justice as well.

It’s our collective duty, not just to protect Ochanya, but to also always ensure that those who prey on our children and other vulnerable members of our society do not ever get away with their hideous crimes.