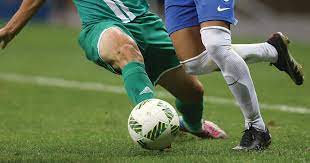 Azu Ishiekwene: I cash my cheque weekly in the thrill and enchantment of the game / Photo credit: Olympics
136
SHARES
ShareTweetShare
ShareRepostPinterest

Until she asked, I didn’t know it was a problem.

Her problem, I mean. When people say whatever gets your time and attention gets you, it’s often true.

For as long as I can remember, 38 weeks every year, this thing gets my time and attention.

It starts slowly, usually on weekends, at the beginning of the season.

And then, as the fixtures pick up tempo and the men separate themselves from the boys, weekends morph into weekdays.

From the way my wife asked whether there was no game of football on a recent weekend afternoon in June, she sounded half mocking, half serious.

Like a girlfriend asking if the other woman was coming.

I sensed from the tone of her voice that the Premier League was a rival, her rival.

Like a drunk being asked if he had kicked the habit, my wife could see from my response that weaning me off watching Saturday afternoon football was no use. As far as football watching goes, this sinner is past redemption.

My mother tried, too.

Not that I have ever been a promising player.

No. Like most kids my age back in the day in Ajegunle, a Lagos slum, we just enjoyed playing football barefoot in street corners and on empty plots using forlorn stones as goalposts.

In the heat of the game, someone would frequently strike the black-and-white patched felele against the wooden windows of some neighbours who endured our racket.

When they could no longer take it — and that happened often – they chased us away with sticks and curses. But we returned.

I always knew that the playing part of me would never amount to much, but no matter.

I was not hopeless.

I even played in a few local competitions involving Ringo Stars, our local football club.

But my wiry legs and tiny frame could have been broken in rough tackles.

That, coupled with the fact that I was the only child, worsened my mother’s fear that I could end up with a broken leg, or worse.

Of course, boys being boys, I still managed to slip through her watchful eyes to play.

If ever I had any hopes of progressing, however, all of that vanished after the deadly chaos of the famous IICC vs Sharks FC of Port Harcourt championship final match in 1979.

I had sneaked out of school to watch the game, unknown to my parents.

It was a game of games, the equivalent at that time of Chelsea vs Arsenal.

The National Stadium, which was many miles from where we lived, was packed.

Unfortunately, negligent stadium officials who should have opened the turnstiles at half-time forgot.

Against safety and common sense, they left all exits locked.

At the end of the wildly exciting game, exiting fans massed at the gates until the mass of trapped flesh crushed into a stampede that left scores of fans dead and many badly injured.

I crawled out bruised and battered, without my school bag or sandals.

As I approached home the whisper from the street was that my mother would kill me.

If she was mad at it me, she didn’t show it when I sauntered in.

The typical African mother can be a tiger or a dove depending on the situation.

When I thought it was over after collapsing into a troubled sleep, mother pounced, tiger mode.

There’s no game like football, the world’s most popular sport, which lousy Americans call soccer

She lashed me to a pulp with a loose fanbelt kept over the door lintel for a moment like this.

Yet, if I thought I had seen anything that night, I was joking.

The next day when Dr. Okoli, the medical director of St Theresa’s Hospital where she worked as cook, showed her newspaper front page photos of the dead fans, among whom I could have been one, mother was in fresh rage.

That evening, when she returned, she gave me the full complement of the fanbelt treatment, again.

That beating put paid to my interest in furthering any football-playing fantasy left in me.

But it didn’t kill my interest in the game – at least, as a fan.

Wrestling is mean, when it’s not staged; boxing is bloody and brutal even in rehearsals, let alone during prize-fights; table-tennis is boring and solitary; and lawn tennis and golf are games of the idle rich.

There’s no game like football, the world’s most popular sport, which lousy Americans call soccer.

What they call football (Rugby is the nearest description) over there is blood sport.

Football, our own kind, is a tribal game.

If, like me, you can’t play on the field, you can find a tribe and kick your butt off playing from the bench.

Or you can watch on TV on weekends during the Premier League season and just scream your head off as Ronaldo or Sallah or Mane do enchanting stuff.

Of course, my wife thinks it’s a bloody waste of time – a grown up man sitting around on a Saturday afternoon yelling and kicking and jumping and arguing at the screen.

I don’t know why she thinks she can succeed where my mother failed, but she won’t give up trying.

“Wetin bi dis?” she would often ask when I get into raptures, especially when Chelsea is playing and winning.

“Dem dey pay you?” I don’t even pay attention.

It’s not for the money. Not for the trophy either.

It’s for the excitement, the suspense, the expectation, the sheer undiluted pleasure of the drama.

And above all, it’s for the spirit made leather, the tribal bond.

For most of the 38 weeks when the English Premier League is on, lousy politicians can back-stab one another all they want, after all that’s what they do when they’re not back-stabbing us.

In any case, if they could, they would be too pleased to overdose us daily on football’s opium while they gorge themselves in the trough!

Celebrities can cheat on themselves and crow in their bling bubble.

When the game is on, there’s no Hausa, no Igbo, no Yoruba, no North or South, no religion.

There’s one thing that brings us together – the jersey, the badge, the colour, the ball and the magic of football. We’re one tribe.

Premier League.com estimates that the League provides employment for 100,000, while 686,000 travel to the UK yearly to watch the games

Football pays, but it depends on how you cash it.

According to Goal.com, the Premier League makes more money than some countries.

The website reports that at a GDP value of $.9.9 billion in the 2019/20 season, if the Premier League were a country, it would be occupying the 150th place in the global economy, currently occupied by Guyana.

There’s also money to be made from a web of economic activities ranging from branding to marketing and TV rights and from betting to forecasting.

A whole range of possibilities lie in an ecosystem that stretches from transport and tourism to maintenance and administration.

Premier League.com estimates that the League provides employment for 100,000, while 686,000 travel to the UK yearly to watch the games.

The larger economics of the Premier League was not the point this June afternoon though.

My wife was not interested in what the League offers the UK or the rest of the world.

The question was – and always has been – what is in it for me?

I cash my cheque weekly in the thrill and enchantment of the game.

Think of how the weekends would be transformed soon?

How bars, restaurants, viewing centres and even social media platforms, would once again teem and throb with tribal fans and excited pundits?

It’s a feeling that money cannot buy. I have made my peace with it.

But the League is on break now till August 5.

And my wife can have me for the next few weeks, before the whistle calls the tribe again for the new season.