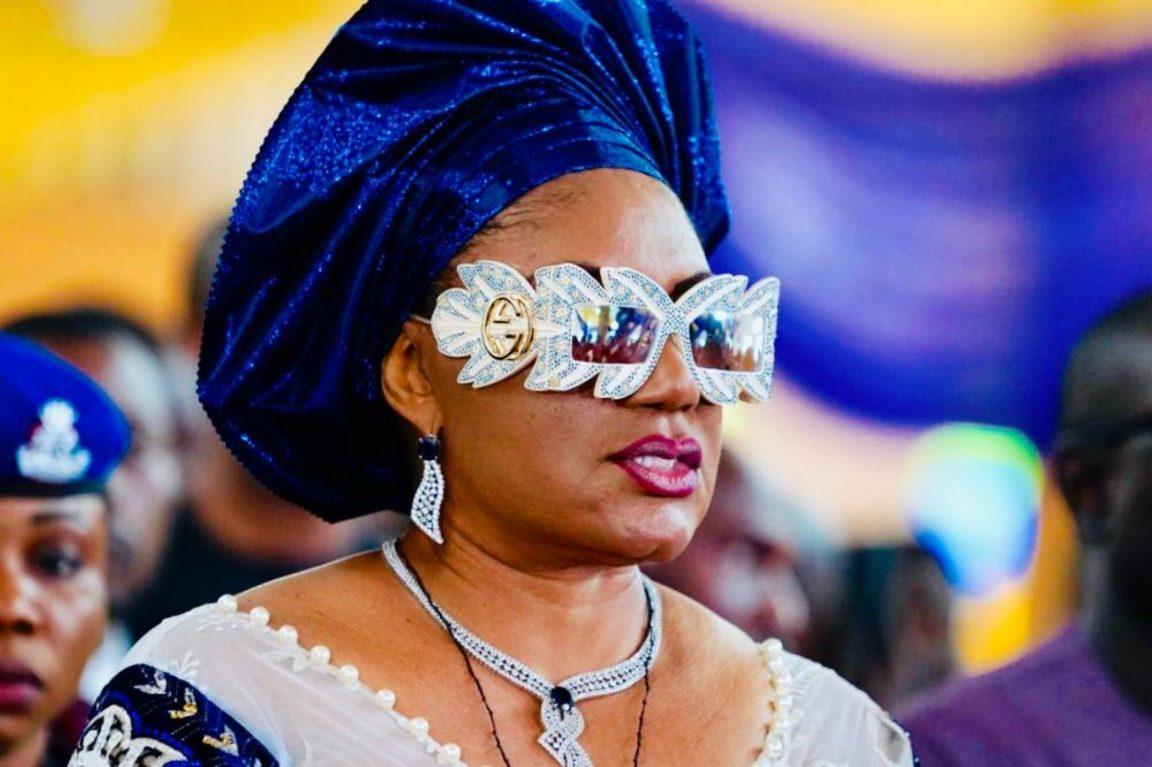 Mrs. Ebele Obiano in her famous Gucci Glasses said to worth N991,800 back in 2020 / Photo credit: orientaltimes
121
SHARES
ShareTweetShare
ShareRepostPinterest

I thought there was a mistake.

In my head, however, the news read differently. This was not the sort of thing you would associate with Bianca, a former ambassador and beauty queen.

In spite of what I was reading as the news broke, I told myself that the reality was the other way round: Ebele Obiano must have slapped Bianca Ojukwu.

If you know Ebele, you will know why in spite of the news, it is easy to be mistaken about what really happened at the swearing-in of Charles Soludo as governor of Anambra State last week.

Willie Obiano may have been governor for eight years, Ebele ruled.

She called the shots in respect of appointments, especially those related to internally generated revenue.

Onitsha Market, a state cash cow, for example, reported to her through her protégée/manager.

Members of the state universal basic education board took their brief from her, too.

And inside Government House, her office was so strategically located, you could not mistake that it was the altar at this official shrine.

She was also a major political force whose influence people vying for political positions coveted. Her displeasure was avoided at all costs. She had weight and she knew how to flaunt it.

During the All Progressives Grand Alliance (APGA) governorship primaries last year, for example, Ebele told her husband – the governor – that she had a different candidate.

She reportedly told him that Soludo was a risk; they would be unable to control him if he took power.

But the governor wanted Soludo.

His wife, on the other hand, made it clear that her preferred candidate was Chukwuma Ume Umeorji, currently representing Aguata federal constituency at the National Assembly.

It took the combined intervention of some traditional rulers, along with members of the clergy, to appease Ebele and save the family divided against itself on the eve of an important election.

It would appear that as part of the “terms of settlement”, the governor would later announce that whereas he had no desire to continue in active politics after leaving office, he would secure a senatorial seat for his wife, Ebele, for her labours.

Had Ebele been permitted to take the dignified exit that she had hoped for and for which she had made elaborate preparations including a dance rehearsal the night before only matched by her extraordinary butterfly-sleeves pink dress on the D-Day, she might have considered sharing her First Lady diary with us

Such is the strength of Ebele’s clout and the fear of her majesty that you can imagine my confusion at the breaking of the news that she was at the receiving end of Bianca’s ambassadorial slap.

It turned out that that was indeed the case, and to make matters worse, Ebele was alone in her moment of distress.

She was painfully ignored by her husband at the crime scene and left to be set upon by an ecstatic public that seemed so pleased by the incident it was prepared to forgive the indiscretion of an ambassador who ignored the provisions of the Geneva convention, supposedly in self defence.

All is fair in love and war, I guess.

But this may well be an incident that Anambrarians, even the whole world, will look back on with deep regret.

Had Ebele been permitted to take the dignified exit that she had hoped for and for which she had made elaborate preparations including a dance rehearsal the night before only matched by her extraordinary butterfly-sleeves pink dress on the D-Day, she might have considered sharing her First Lady diary with us.

The diary of her last days in office was nothing, if not extraordinary, worthier in my view than the famous memoirs of Harriette Wilson, the concubine of the Duke of Wellington who, in defiance of the threat of the Duke to publish and be damned, still went ahead to leak her salacious notes to a blackmailer.

I’m told, for example, that two weeks before the handover, the governor had taken journalists in the state on a final tour of his legacy projects. Later when they returned for lunch in the Government House, Obiano hosted them alone; Ebele was not available.

As they finished and were departing, however, she returned.

The governor quickly recalled as many journalists as he could find and asked them to take their seats again.

As they were wondering why, he announced that he recalled them to pay their respects to Her Excellency, the First Lady.

During the All Progressives Grand Alliance (APGA) governorship primaries last year, for example, Ebele told her husband – the governor – that she had a different candidate

Now that they had paid their courtesies and she had bestowed her benevolent smile on them, they could depart in peace.

People familiar with Anambra protocol in the last eight years said preferments have been amended to ensure that at all public functions, Ebele was duly acknowledged and applauded before the deputy governor.

And, in fact, even on the handover day, Ebele’s diary would show that she was her own woman.

She chose her own time to arrive at the venue which, by the way, was inside Government House. She arrived, not before the event started, but in line with her disdain for all deputies, including deputy governors, she came in after the new deputy governor had been sworn in.

Ebele has amassed such a rich collection of experiences in the last eight years, the world, especially the office of first ladyship, would be the poorer for the recent public humiliation which I strongly suspect might force her into her shell.

Who wouldn’t want to find out what exactly was her beef with Bianca, for example?

I’m told that she was unhappy that Bianca took the Ojukwu political talisman too far.

That just because she’s Ojukwu’s wife, Bianca regarded herself as the goddess of APGA, the sun around which everything revolved.

The cold war continued for years.

When Bianca made a bid for the Senate in 2019, however, Ebele thought that was the moment to settle the matter of supremacy once and for all.

She opposed Bianca’s candidacy and instead, backed E.N. Ukachukwu, the perennial aspirant for Anambra governorship and veteran Abuja politician.

Of course, Bianca “lost” the APGA party primaries to Ebele’s candidate, but another party, the YPP, exploited the divided house and won the bigger electoral war for Anambra South senatorial district.

In the end, both Bianca and Ebele lost.

That defeat widened the gap and festered the wound. By handover day, matters had reached boiling point.

How can anyone forget her pair of crystal-studded Gucci glasses estimated by some to be worth only $2,755 or the equivalent at current prices, of three years’ minimum wage in the country?

I think, if she had been treated nicely, she might even have decided to leave the exotic “bones” behind in the state museum.

But sadly that chance has been missed.

And also gone with the Gucci glasses is the inside story of the designer Covid-19 vaccine which Ebele travelled thousands of miles to Houston to receive at a time folks in her home state were wondering when the first jabs would arrive and if they would be alive to be vaccinated.

I’m sure that entries from Ebele’s 2014 diary would also have included the now leaked encounter in Poland where it took Nigeria’s former First Lady, Patience Jonathan, to save Ebele from what might have degenerated into a brawl, on foreign soil, with a Federal lawmaker, Uche Ekwunife.

Mrs. Jonathan’s prompt and decisive intervention at that moment of great peril, it would seem, was one of the reasons insiders will forever remember the erstwhile First Lady as “Mama Peace”.

Ebele has given her side of the handover-day story; she explained that on that fateful day, she went over to admire the gloss on Bianca’s lips and to greet her only to be molested and struck in the face by the latter.

I honestly think Bianca’s act of aggression constitutes a contravention of the Geneva convention.

It was unprovoked (just like Putin’s war in Ukraine), and should be condemned in its entirety.

Her supporters, whether they are oligarchs or puny-garchs, should also have their assets frozen as a deterrent.

Yet, Ebele is in good company of a long list of forebears who, though in a higher league, would have been proud of her performance.

I’m sure that entries from Ebele’s 2014 diary would also have included the now leaked encounter in Poland where it took Nigeria’s former First Lady, Patience Jonathan, to save Ebele from what might have degenerated into a brawl, on foreign soil, with a Federal lawmaker, Uche Ekwunife

Former Kenyan First Lady, Lucy Kibaki, once slapped a government official during an Independence Day ceremony for mistakenly introducing her in the name of a woman widely believed to be President Mwai Kibaki’s second wife.

That was apart from besieging a newspaper house, slapping a cameraman and seizing a reporter’s notebook on charges that the newspaper had been unfair in its reporting.

Grace Mugabe (fondly called Gucci Grace) had a cerebral approach. She pulled the strings behind the scenes and like the breeze, you knew she was there but you couldn’t hold her.

She topped off her performance by procuring a postgraduate degree which became a subject of litigation only after her husband’s death.

Her fury only came to the fore after her bereavement. Understandably.

Let no one diminish Ebele’s record. She will be greatly missed.

In my humble view, our misery can only be assuaged if she could find it in her heart to let bygones be bygones, followed by the publication of her much-expected Government House diary.

It would be a bestseller, the envy of her cohorts, her ultimate revenge against Bianca, and for good measure, the launchpad for her senatorial ambition.