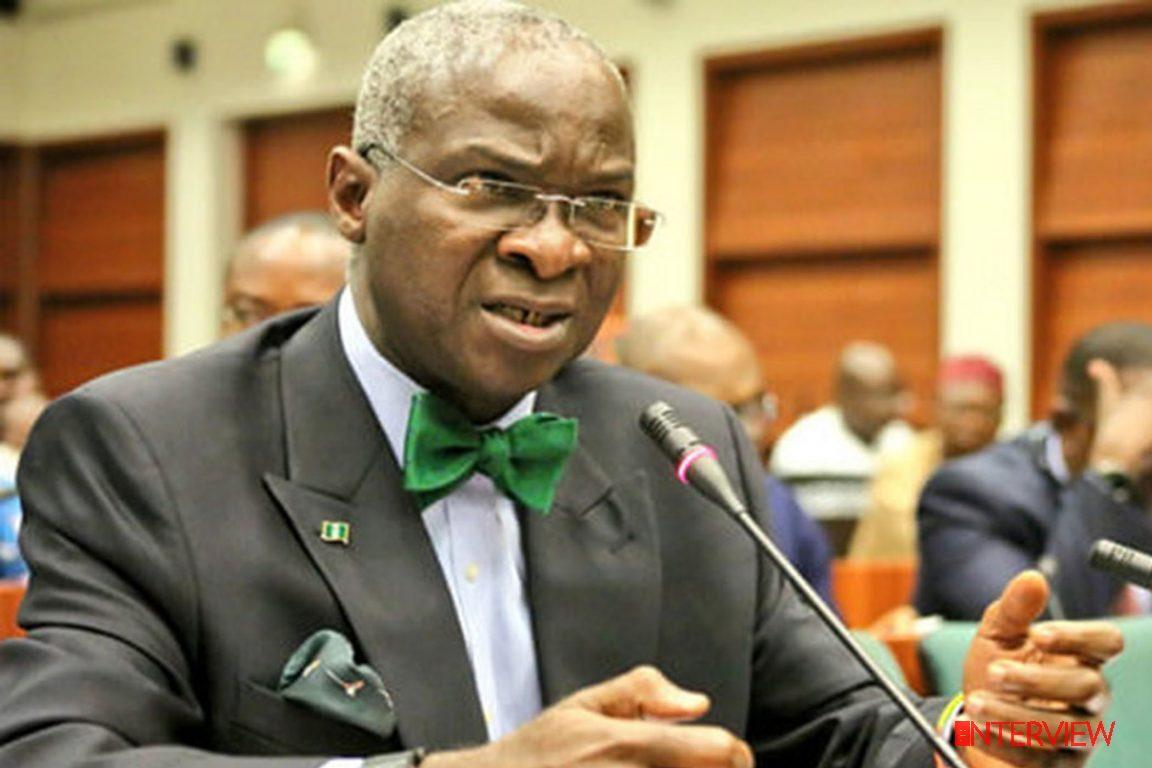 The Minster of Works and Housing, Mr. Babatunde Fashola, says the Federal Government has undertaken 1,018 contracts covering 859 projects in infrastructure investments across the country.

Fashola made this known while giving the account of his ministry’s stewardship in the President Muhammadu Buhari’s administration in a Town Hall Meeting in Abuja on Tuesday.

The meeting was organised by the Federal Ministry of Information to give a score card on the achievements of the Federal Government.

It was also conceived as part of efforts to bridge the communication gap between the government and the citizenry and also keep them informed of policies and programmes of government.

Speaking at the meeting, Fashola said the roads were not just roads but were critical infrastructure required to develop a country. According to him, currently there is no state in Nigeria where there is no federal project ongoing.

He said that 941 km roads were handed over between November and December 2021, connecting 10 states in five geo-political zones across the country.

Fashola said many of the implemented infrastructure programmes had direct impact on the live and livelihood of many citizens giving a list of documented testimonies of people who had benefited from the projects.

“The life defining impact of road transport infrastructure as attested to by beneficiaries some of whom I would present to you their own words.

“Garba, a commuter and Koko resident, `before the rehabilitation of the road it took three hours to drive from Jega to Koko but now it is less than 30 minutes.’’

Fashola also gave testimonies of other citizens who now earn better living due to the construction of the roads.

The minister stressed that the investments in infrastructure is deep seated and its manifestation is obvious in the change in the life of people.

“These roads are not roads in themselves. They represent critical infrastructure necessary to develop a country and its people for them to be able to get on with their lives in an easy and convenient way.

“President Muhammadu Buhari clearly understands the necessity to invest in infrastructure, not just to support a growing population but as an economic driver.

“It is, therefore, not surprising that through the Federal Ministry of Works we are managing over 1,019 contracts involving 958 bridges and road projects.

“Just as we are constructing houses in 34 states of the federation as well as new federal secretariats in Anambra, Nasarawa, Bayelsa, Zamfara Osun and Ekiti States,” he said.

The minister, who was answering questions on how the roads would be maintained, said such roads as the Lagos Ibadan express way, the Abuja-Kano expressway and the 2nd Niger Bridge would all be tolled eventually via a tolling policy to maintain them.

On empty completed buildings scattered all over the country the minister said he had approached the National Population Commission to help in enumerating the unoccupied building and take a census on empty houses, why they exist and what citizens want in order to reduce the housing deficit.

Also speaking at the event, the Minister of Finance, Mrs Zainab Ahmed, said much of the 1,019 infrastructure projects were funded through initiatives by her ministry.

She said such programmes were funded through various avenues such as the Road Infrastructure Development and Refurbishment Investment Tax Credit Scheme (RITCS),

”They are designed to complement and ameliorate the burden of funding significant capital outlays on road projects,” she said.

“The scheme commences in 2019 with 19 road projects covering 769.16 kilometer in 11 states across the six geo-political zones.

“Other schemes are: The Nigerian Sovereign Investment Authority (NSIA) Infrastructure Development Projects (NIF) through over seven years (2015-2021) the government had invested and completed 13 projects.

“Through Financing of road infrastructure through Sovereign Sukuk Bonds, this funding since September 2017, a total of N362.56 billion has been given to the Federal Ministry of Works and Housing to fund key road projects.

“The most recent of which is the N250 billion Sukuk, which was shared among the Federal Capital Territory, Ministry of Niger Delta and the Ministry of Works and Housing.’’ Ahmed said.

It was the 21st edition since its inception in 2016, the next edition will come up on March 24, hosting the ministries of Transportation, Aviation, Communication and Digital Economy and Water Resources.