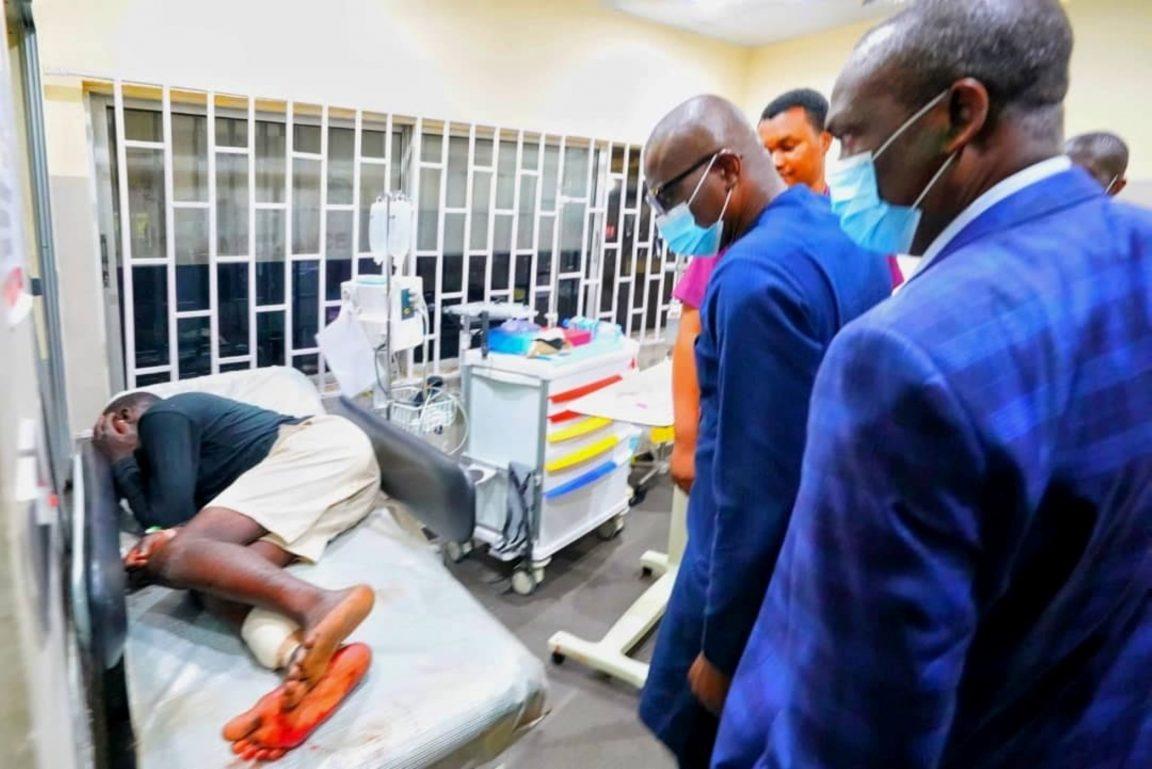 It was hard to keep up with the torrent of posts as the power of social media was deployed in all its ferocity for good and evil.

Through it all though, one thing was constant on my mind on Tuesday night: the images of vulnerable, distressed youths fighting for their lives.

You couldn’t make up the chaos, if you tried.

How did Lagos, a city of refuge, become a shooting range against defenceless young people waving the flag and singing the anthem?

How did that happen?

How was it within the powers of Governor Babajide Sanwo-Olu to declare a curfew published within hours of enforcement, but beyond him to contain the consequences?

What was he thinking when he declared the curfew after midday in a city where even at the best of times commuting is a nightmare?

It may have been unintended but the switching off of the lights worsened the confusion and provided cover for the rogue soldiers to start shooting even before the official curfew started.

Photos of a chap who allegedly led the rogue mission are floating out there and surely the military high command does not think we’ll be fooled into treating this as a redux of Fela Anikulapo-Kuti’s Unknown Soldier?

Yet, if Sanwo-Olu did not have the slightest hint of the deployment and was at his watch throughout that dreadful Tuesday night, he could have engaged citizens as the events were unfolding through any of the multiple channels available to him, instead of waiting till the next day to promise a futile investigation.

It may have been unintended, but the disabling of the cameras at the toll gate and the switching off of the lights worsened the confusion and provided cover for the rogue soldiers to start shooting even before the official curfew started

Comparisons are pointless, and even a disservice to the memory of the dead or wounded.

But the temptation is irresistible, even though it’s with a man possessed of exhibitionism.

Would Governor Nyesom Wike of Rivers State standby and allow what happened at Lekki Toll Gate happen in Mile 1 Diobu?

How easy would it have been for Sanwo-Olu to establish a lasting bond of trust with the youths if he braved that awful night and showed up right by their side in that moment of need?

His visit to Aso Rock to present the demands of the #ENDSARS protesters to President Muhammadu Buhari, his regular engagement with them, and his #5for5, benchmarking the state’s commitment to the protesters’ demands, were signs that he was a cut above Governor Simon Lalong and the rest who lined up on all fours at the Presidential Villa asking for SARS to get medals for meritorious services.

After COVID-19 left over 35 per cent shortfall in state revenue, it’s not unlikely that Sanwo-Olu has been under pressure to reopen the country’s commercial capital for business and therefore wanted to clear the streets – especially the Lekki Toll Gates, which generate about N220m weekly for the government.

Also, reports that hoodlums were hijacking the protest in some parts of Lagos, extorting commuters and unleashing violence on policemen and attacking police stations were genuine causes for concern.

One of the main organisers, Feminist Coalition, for example, was prepared to pay private security companies for protection, but they refused, citing fear of official reprisal.

Where they feared to tread, the same government that would not secure peaceful protesters gave thugs lift and cover to unleash mayhem.

If the governor paused for a minute to reflect on his own #5for5 marker, he would have seen that even the first item – the disbanding of SARS – had not even been done!

Sanwo-Olu’s precipitous declaration of a curfew may have been intended to spring a surprise, and to prioritise safety.

The backlash however exposes the weakness and predatory culture in the current security system, which his party, the All Progressives Congress (APC), has failed to address and against which the #ENDSARS protests have been all about.

If the governor paused for a minute to reflect on his own #5for5 marker, he would have seen that even the first item – the disbanding of SARS – had not been done!

Anyone who takes the announcement of the Inspector General of Police Mohammed Adamu that SARS had been disbanded seriously, is either a fraud or a convenient liar.

How can the IGP say one day that SARS had been disbanded and then announce the next day that a new SWAT unit had been created from the ashes of a rotten SARS?

And the protesters are supposed to clap for Adamu and tick off a new SWAT team as answer to prayer?

Sure, Sanwo-Olu promptly empaneled a judicial commission to hold the perpetrators of police brutality to account; and also announced a N200m fund to compensate victims, but how were the protesters to accept these gestures in good faith when all parties know that police is squarely a federal matter and President Buhari to whom the police answer exclusively, is reluctant to make any structural changes?

The offences committed may be within the purview of the state, and hopefully, some of the states may succeed in bringing errant SARS officers to book; but any fundamental change in the structure of the force to root out abuse and brutality lies with the President.

The political elite has never been as confused as the current #ENDSARS #ENDSWAT protests have shown it to be.

And this confusion – sometimes mixed with amusement, admiration and fear – has forced governments across the country to respond by throwing everything in the old rulebook at these bees of protesting youths perched on its most vulnerable parts.

Exactly how do you tackle formlessness, something you cannot deny, but yet cannot bend?

In June, a UK-based private country risk assessment firm, Verisk Marplecroft, predicted that even if COVID-19 recedes, the economic fallouts will not, especially in countries with underlying structural problems and weak institutions.

The firm said by the last quarter of this year, a number of countries, particularly in Africa and Asia, would be hard hit by street protests on a scale that could leave already fragile governments bereft.

Nigeria, Iran, Ethiopia, and the Democratic Republic of Congo were specifically mentioned; but we had obviously not reached that page of the report when #ENDSARS happened.

What to do with a bunch of youths who after 12 days of continuous and escalating protests in defiance of water cannons, teargas, tyre-slashing and live bullets, still continue to insist their voices must be heard and their demands for justice and accountability met?

The old toolbox has failed.

The youths have taken a leaf from Egypt where young protesters are demanding an end to authoritarian rule; Hong Kong where for months now and still going, young people have been demanding protection of their civil liberties; Lebanon where frustrated youths defied state institutions to force an incompetent and corrupt government to resign; Thailand where the military and the monarchy have been playing ping pong with the future of the country; and even France where the Yellow Shirts has protested, morphed and splintered from social movement to a political force on minority rights.

Like Occupy Wall Street nine ago, none of the protests in any of these countries needed leaders to organise.

#ENDSARS protesters have also seen enough of the downsides of crowning leaders from the outset of social movements to make the same mistake.

It’s regrettable that private property, including media houses, are now being targeted by hoodlums.

That madness must stop.

The wanton destruction and random killings must stop and those who instead of going where the trouble is decided to turn the Lekki Toll Gate into a shooting range have a lot to answer for.

Lekki Toll Gate symbolises the spirit of #ENDSARS protests. It has exposed the incompetence of the political elite’s response and deep seated social problems swept under the rug.

Where government tried to muzzle protesters by blocking access to funds from commercial banks, the protesters resorted to cryptocurrency.

Where government hired thugs, protesters acted as their own security, using drones and apps to track pilfering.

Where government played the ethnic and religious cards, protesters stood together across tribal and ethnic lines in fellowship, even levying themselves to provide prosthetic limb for a disabled youth.

Where the government offered food as bribe and prevented ambulances from going in, protesters prepared their own food, improvised their own medical supplies and cleaned the streets.

Where they could not trust either mainstream media or government propaganda channels, they invented “Soro Soke”, their own radio podcast.

And where government played its ultimate card of unprovoked violence, the protesters responded by taking refuge under the banner of a bloodied national flag, singing the anthem.

It has been a teachable moment, something completely new, for protests everywhere.

Some have suggested that the protests would not be a success until the youths marched on Aso Rock in their bloodied vests. I disagree.

The measure of success of a social movement is not necessarily how many items it ticks off its demand list.

The very ability to highlight the items and bring them so poignantly to the consciousness of society is, in and of itself, resounding success.

And that chaotic Tuesday night at Lekki Toll Gate might well be the tipping point.