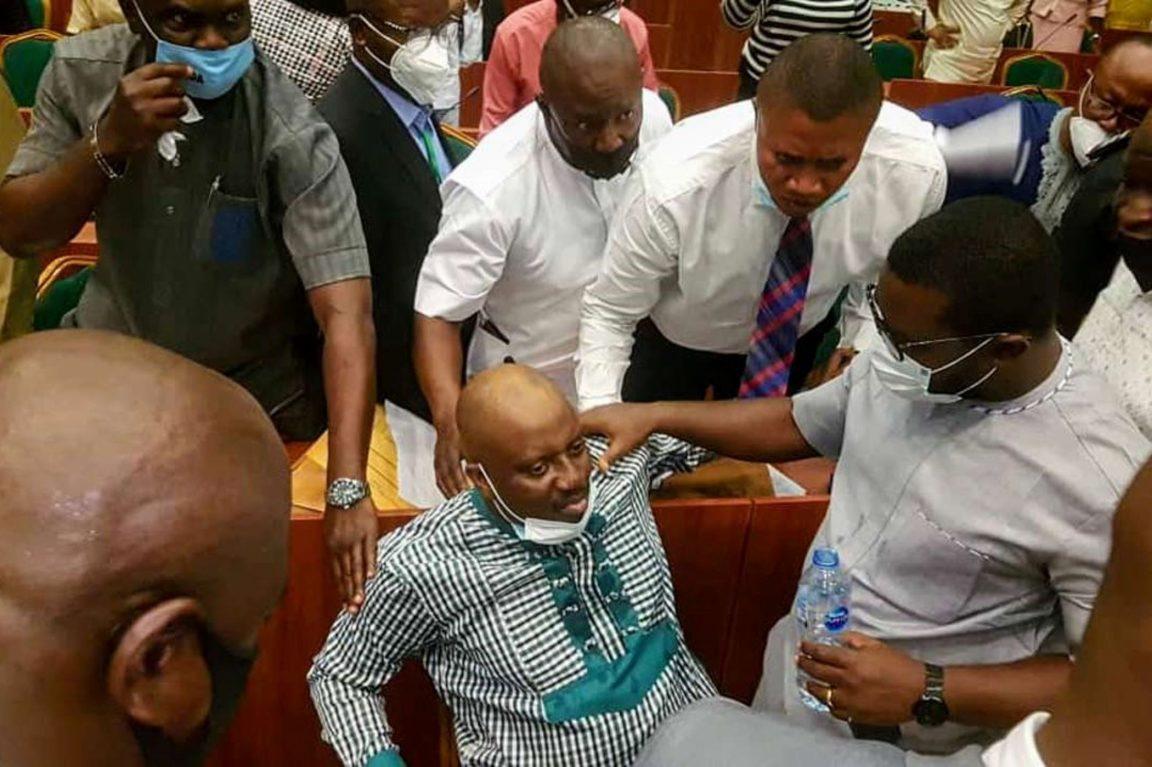 The drama between Femi Gbajabiamila, the Speaker of the House of Representatives and Senator Akpabio seems to have ended even before it began.

Akpabio, the Niger Delta Minister had declared that most of the contracts or non-contracts through which trillions of naira have literally disappeared into our modern black hole called the Niger Delta Development Commission (NDDC) were awarded to the Federal lawmakers.

Consequently, Gbajabiamila gave him 24-48 hours to name the legislators who had collected NDDC contracts or there would be legal consequences.

Just yesterday, Gbajabiamilia disclosed that he had instructed the House clear to initiate legal proceedings against the uncommon senator from Akwa Ibom State.

And of course, our dear senator, did the most common and expected thing; he ate his words and denied ever saying what we all watched him say on video.

Anyway, we shall wait for both Gbajabiamila’s robust response and Akpabio’s counter action.

But I’m not holding my breath. I would advise you not to too. My sincere sympathy to all those who had booked seats and bought popcorn and drinks for what we all thought was going to a long seasonal show.

This probe will probably end where almost all the others did: in the dustbin of history.

Nigerian politicians will always make it happen and Akpabio is a son of the soil in this matter.

Since 2002 when he was appointed the Commissioner for Petroleum and Natural Resources in Akwa Ibom State by the then Governor Obong Victor Attah, he hasn’t looked back.

From the petroleum ministry, he moved to Local government and Chieftaincy Affairs, and then to Lands and Housing.

He is a man who knows where all the dead bodies are buried and was just waiting for an opportunity to start exhuming them, one incestuous contract after another

By 2006, he was ready for the governor’s seat in the state and 2007 saw him take over from Obong Victor Attah as the second civilian governor of the state in the Third Republic.

The rest, as they say, is history.

With his ‘uncommon transformation’ stunt in Akwa Ibom as its state’s governor for eight years, it’s clear indeed that Akpabio is an uncommon Nigerian politician.

He proved it again on Monday when he faced the lawmakers eyeball to eyeball and forced them to blink first.

He is a man who knows where all the dead bodies are buried and was just waiting for an opportunity to start exhuming them, one incestuous contract after another.

The Chairman of the probe committee knew this. His shameless chants of ‘Minister it’s ok, it’s ok, put off your mic’, was a desperate attempt to quickly cover up a leg that’s already exposed.

Gbajabiamila also knew this. While he may never have been awarded any contract from the NDDC what about other government agencies or his colleagues?

Can he beat his chest and say he’s never been in bed with the executive all these years as a federal legislator?
Of course not.

And so, when he issued that fiat on Tuesday, and the subsequent hint at legal action against the minister, it was obvious that was another face-saving measure by an arm of government that has long ago abandoned its calling on the altar of filthy lucre.\

And now that Minister Akpabio has done the needful, the curtain is finally drawn even before scene one is over.
The Nigerian legislature at all levels has proven in many ways that the people cannot trust it to protect their interests.

It’s always been about them and them alone.

Or how else can you explain their insistence to spend N27bn on a National Assembly Complex, when greater part of the citizens go to bed hungry daily in this COVID economy?

But we are not surprised.

It’s the Nigerian people, the ones suffering the most, who keep disappointing on all fronts.

Since this probe began I have been waiting for our famous protesters from the region with their infamous ‘Live Dieziani Alone’ placards to besiege the National Assembly demanding for the heads of these people, but they’ve all gone missing.

Rather, what we see all over social media are skits from the fainting professor and the extremely loquacious Akpabio as he tackled the lawmakers.

What we have seen are people sharing laughs over things that should rather make us cry.

Yes, we should like the Hebrews of the old wear sackcloth and gnash our teeth at the city gate.

There must be something fundamentally wrong with us all as people to breed and allow such evil and evil doers to thrive among us.

Among a serious people, it won’t be enough to just sack the verbose minister, his fainting accomplice; all of those who took the decision to share these monies should have been facing indictment and trial but because we are not ready yet for a serious country, we find solace in jokes and skits

The government has just released a circular on Rent Tax. Landlords and estate managers have been mandated to henceforth collect six per cent of every rent they receive and remit same to the Federal Inland Revenue Service (FIRS).

Some of these monies, which some of us may have to pay with our blood and tears would be appropriated to a place like the NDDC, so that those living in that region may thrive.

But then, some incurable kleptomaniacs would brazenly steal these monies, come to the National Assembly to speak English, open their criminally big eyes and faint for us and the best we can do is create and circulate jokes?

Truly, we deserve these thieving clowns we call leaders.

How can the NDDC staff allocate N1.5bn or is it N1.3bn to themselves as COVID-19 palliatives after collecting their monthly salaries and the outrage ends on the social media?

No one is talking about them refunding the ill-gotten palliatives and then, facing prosecution.

Among a serious people, it won’t be enough to just sack the verbose minister, his fainting accomplice; all of those who took the decision to share these monies should have been facing indictment and trial but because we are not ready yet for a serious country, we find solace in jokes and skits.

Again, we clearly deserve the leaders we have.

But you see, things must change and like I have always believed; this change must begin with you and I.

And this time jokes and comedy skits won’t cut it.