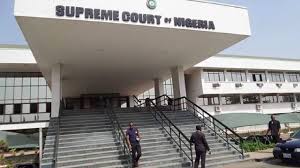 A significant section of public opinion, including passionate comments by lawyers, has expressed concern about the increasing degree of involvement of the courts in election matters / Photo credit:
188
SHARES
ShareTweetShare
PinShareShareShareFlip

Not a few politicians are beginning to have second thoughts about what may be the sure path to electoral success in future.

The traditional model, which was godfather plus moneybags, and then crisscrossing the country squawking like fowls with broken beaks, appears to be old school and in rapid decline.

After Hope Uzodinma’s unexpected installation as Imo State governor and Douye Diri’s dramatic emergence as Bayelsa State governor, both following rulings by the Supreme Court, politicians must be asking themselves whether it would not be more productive to stop canvassing voters, and instead, just take their campaigns to judges.

Sure, Reverend Father Ejike Mbaka’s prophecy about Imo cannot be forgotten in a hurry. If Mbaka calls a number of politicians once, they will answer twice – swiftly and most reverentially, too.

Yet, if these politicians needed just one last sacrifice to save themselves, they would keep the larger portion for the Supreme Court, whose rulings so far, especially in recent pre-election matters, have been by far the most consequential since the 2019 general elections.
A significant section of public opinion, including passionate comments by lawyers, has expressed concern about the increasing degree of involvement of the courts in election matters.
They argue that however well-meaning and inevitable the process, more court involvement will further erode voter confidence and create the unfortunate impression that it doesn’t matter who voters choose on the ballot, the courts will, in the end, override their choice.

Why bother when you can find a prophet who can tell you the future, or failing that, courts that would almost certainly decide the final outcome?
Is the problem really with the courts – or in the particular controversial instances, with the Supreme Court?

It’s convenient for politicians to pass the buck or for them to incite public opinion against the court. If they inspect the face in the mirror a bit more closely, however, they would find that it not only looks like them, feels like them and clowns like them, it’s their spitting image writ large

Is there anything to suggest that the Supreme Court is, willy-nilly, inserting itself into the ballot, as is widely feared, and usurping voters by doing so?
Concerns that the court could be needlessly embroiled in politics cannot be dismissed, but in the cases at hand – that is in Imo and Bayelsa – it is not the court, but the politicians that have invited this misery upon themselves and the country.
It’s convenient for politicians to pass the buck or for them to incite public opinion against the court. If they inspect the face in the mirror a bit more closely, however, they would find that it not only looks like them, feels like them and clowns like them, it’s their spitting image writ large.
Since the parties have conveniently forgotten the crime scene, it might be useful to take them back there, where it all began.

Today’s harvest was the deadly seed sown during the party primaries of virtually all the political parties, but especially the dominant ones – the All Progressives Congress (APC) and the Peoples Democratic Party (PDP).

After plunging the hatchet in each other’s backs in desperate attempts for party flag, they have forgotten so quickly and so shamelessly, that they also left the messy splinters for the courts to extract.

The parties made the rules about who was fit to contest and who wasn’t all right, and in some cases, they even advertised the rules in newspapers ahead of the party primaries.

Yet, in a widespread infection of impunity that showed that they were simply incapable of following their own rules, candidates’ names were swapped at the last minute, others were muscled out by vested interests, and total strangers imposed out of spite, self-service and a conviction that nothing would happen.

Well, as they say in my part of Lagos, 10 is happening.
Impunity – that fundamental problem which cost the PDP its hold on power after 19 years – reared its head vigorously in the primaries of the two main parties and the consequence is what we’re living with today.

The ghosts of the pre-election shenanigans have come back to haunt the parties.

The Chairman of the Independent National Electoral Commission (INEC), Professor Mahmood Yakubu, once said that a significant milestone in the activities of the commission was the reduction in election litigations, with fewer court-ordered elections in the last five years.

Today’s harvest was the deadly seed sown during the party primaries of virtually all the political parties, but especially the dominant ones – the All Progressives Congress (APC) and the People’s Democratic Party (PDP)

Yet, INEC still has grounds to cover, especially as it now seems from the case of the Bayelsa APC deputy governorship candidate that the parties can no longer be trusted even to vet their candidates properly, a responsibility placed squarely on them by the electoral law.

It is concerning that the courts are being dragged more and more into electoral disputes; it is concerning that in spite of earlier amendments, the present electoral law still allows disputes to linger on months after elections have ended, with serious consequences for public confidence and the treasury; it is also concerning that nearly one year after the last general elections the country still appears to be in campaign mode.

But we should not, for a single moment, fail to put the blame where it lies squarely: the failure of the political parties to do right, even by their own rules!

Unfortunately, this vital point is missing in the rush by those currently at a disadvantage to find scapegoats and spill blood; and lost in the euphoria by those at an advantage in a bid to secure their position and just move on.

Add to this, the obsession about 2023, which appears to have come before its time, and you’ll understand why the use of term “political fever” is an understatement.
Will the parties pause, take a long, hard look at themselves and try, for once, to do things properly? At one level, that would be asking too much.

But we should not, for a single moment, fail to put the blame where it lies squarely: the failure of the political parties to do right, even by their own rules!

When all the hue and cry about the Supreme Court ruling subsides and the tantrums fade, politicians will still find a place in the system to fit in nicely.

What is the incentive for politicians in the Imo State House of Assembly to do right when, for example, all it took them to join the APC gravy train ride after the Supreme Court ruling was to switch sides, just like that?

And who can blame the speaker, the mastermind of the defections, if the losing party, the PDP, saw nothing wrong when in his former life the same speaker abandoned APGA for PDP, without qualms?

Yet, at a deeper, more collective level, we all suffer when our institutions fail so catastrophically.

And that hardly happens with a bang – it begins with important building blocks, like political parties undermining their own rules, and yet believing that no matter what they do, the sun will not rise the next day, unless they permit it.

The leadership of the APC may have been deeply displeased by the ruling of the court, but it permitted a system where the party chairman was both the chairman of the screening committee and also, chairman of the appeals committee, making it difficult for the leadership to extricate himself from the current situation at least in Bayelsa.

Yet going by the reaction from the APC headquarters, you’ll have to go back to the Siege of Orubebe to find out the last time a politician threatened that there would be no government the next day, if the country did not bend to the wishes of his party.

Whether the ruling party meant it or not, a new governor has now been sworn in.

A dose of humble pie taken after a few days of fresh air should help the APC see clearly where the problem lies: it is not with the court, it’s with politicians who will not keep their own rules.