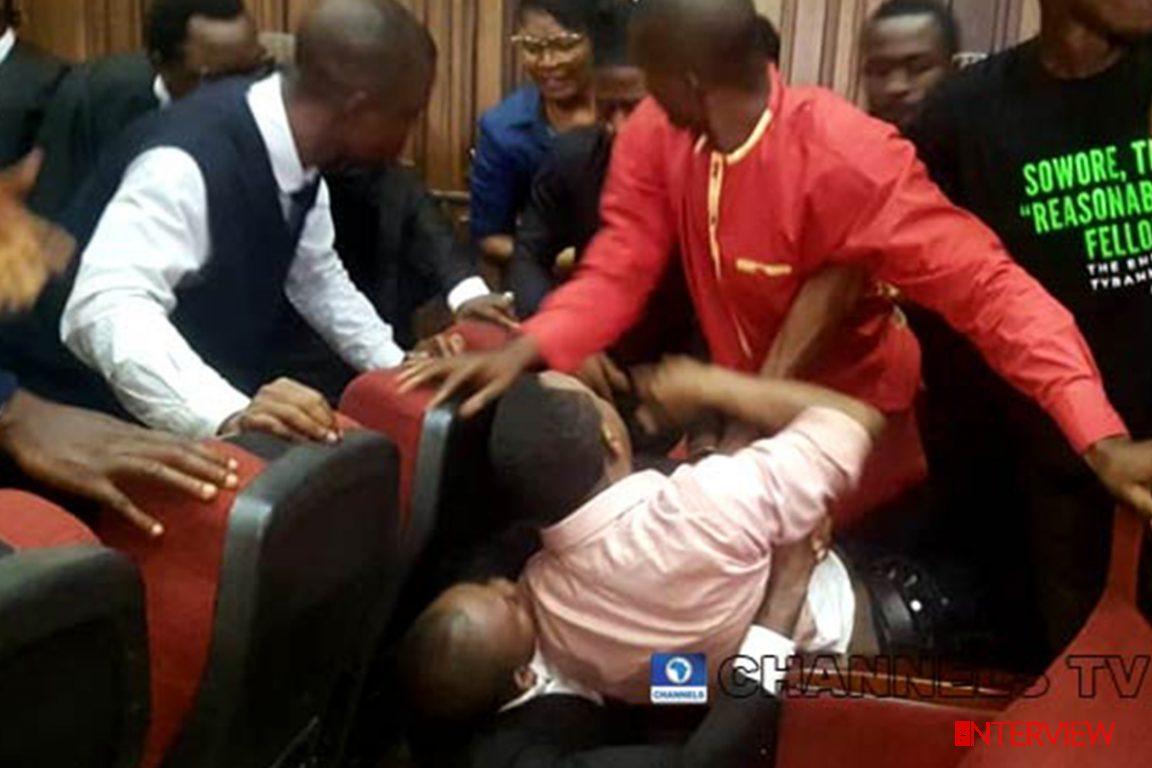 Publisher of Sahara Reporters, Omoyele Sowore, in a peach shirt being forcibly dragged down by a DSS officer in the court during his rearrest by the DSS on December 7 / Photo credit: Channels TV
19
SHARES
ShareTweetShare
PinShareShareShareFlip

The Department of State Services (DSS) on Tuesday evening bowed to pressure and released Sahara Reporters’ publisher and convener of #RevolutionNow, Omoyele Sowore, from its custody.

His release came shortly after the federal government through the office of Attorney General of the Federation, Abubakar Malami, ordered the release of former National Security Adviser (NSA) Sambo Dasuki and Sowore, from detention on Tuesday.

Sowore, who was first arrested on August 3 for planning a protest tagged #RevolutionNow, was first released after spending 125 days in DSS detention.

He was granted bail and released December 6 but rearrested in Abuja Federal High court less than 24 hours after.

Former minister of education and co-covener of the Bring Back Our Girls Group (BBOG), Oby Ekwesili, said Sowore’s release affirmed the power of the office of the citizen, saying no government can win against the people.

Dr. Joe Abbah, former director-general of the Bureau for Public Sector Reform, said, “I am glad that the Federal Government has ordered the release of Dasuki and Sowore. I hope that those that attacked some of us for insisting that the rule of law must prevail will now have a rethink. Importantly, I hope that the DSS will immediately comply.

Professor Jibrin Ibrahim who noted that releasing Dasuki and Sowore was good also added that it was time for government to obey all court orders.

“It’s good and proper that Government has agreed to release Dasuki and Sowore in obedience to court directives. It’s now time for President @MBuhari to follow up on obedience to ALL court orders but also to stop the steady decline to authoritarianism in the country,” he tweeted.