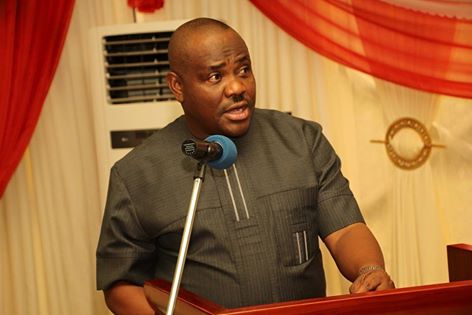 We had pencilled him in a few months ago, but somehow, he disappeared from our radar. Rivers State Governor Nyesom Wike is a stalker’s nightmare, so we had to find a way to smoke him out.

After weeks of trying through one of his mentors, he requested a copy of our magazine and was impressed by the depth of the interviews.

Wike seemed particularly struck by our interview with his Ekiti State counterpart, Ayodele Fayose, one of the most widely read interviews by the magazine so far. That helped to pave the way.

Apart from the contest for the Presidency in 2015, one of the bitterest electoral battles that year was fought in Rivers State – between former Governor Rotimi Amaechi’s protégé, Dakuku Peterside, and Wike.

Wike, candidate of the Peoples Democratic Party and ally of former First Lady, Dame Patience Jonathan, defeated Peterside in the election but waited six months for a string of seesaw court rulings to secure his victory.

Yet, even after the court rulings, it seemed apparent that Wike might have won the battle but not the peace.

Amaechi and politicians loyal to him maintained an attack on Wike, accusing him of suborning the judiciary and instigating a reign of terror against All Progressives Congress’ members in the state.

Wike responded in kind. Among other things, he instituted a judicial probe of Amaechi’s tenure. The panel returned a verdict of profligacy and outright looting against the former governor who responded that it was a witch-hunt.

Things came to a head earlier this year when Wike claimed that the $43million found in an apartment in Ikoyi, Lagos, by the Economic and Financial Crimes Commission was actually money from Rivers State; that Amaechi had diverted to fund the APC’s campaign.

The Interview felt compelled to ask questions about the Rivers story. How did a state ranked among the top three highest in per capita income in Nigeria descend into a post-election chaos that not only threatened to ground its affairs but also to upend vital oil production activities?

Was this simply an overflow of the personal animosities of two former friends and allies or was there any vital public interest at stake?

There’s work to be done in Rivers. The evidence starts from the terminal buildings of the international airport which have been in a perpetual state of disrepair for eons.

Also, the federal roads are a nightmare and ongoing construction works on a number of key state roads have compounded the misery of commuters.

“Go and ask Amaechi what he did with the money,” Wike said as we peppered him with questions.

“In about two years of my stewardship, people can see the difference; they call me Mr. Project, a name that was first used for me here by Vice President Osinbajo. Go and ask Amaechi what he did for eight years.”

The jury is still out. But the depth of the animosity runs deep. For the nearly two and a half hours that the interview lasted, each time a question on Amaechi came up, Wike appeared at pains to answer.

There was one point though when his sense of humour appeared to overwhelm is pain:

“You were Amaechi’s chief of staff,” we asked. “He said he has never taken a bribe and that he does not like money.”

“Do people take bribes in public? If he says he doesn’t like money, well that’s up to him. But me, I like money o…I like money because of the problems you can use it to solve…!”

The questions in this edition go beyond Wike’s relationship with Amaechi. We also covered the governor’s role in the crisis that rocked the PDP; the 2015 presidential election in which former President Goodluck Jonathan led the party to defeat; Godswill Orubebe’s drama at the INEC headquarters, and allegations that Wike had pocketed the state’s judiciary.

This edition is yet another reader’s companion in local and national politics.