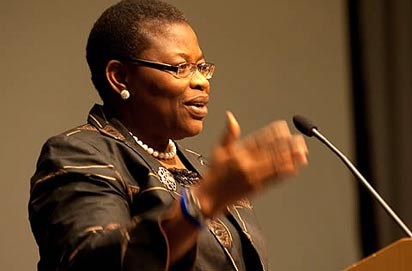 We have published the first installment of the highlights of the interview with former Vice President of the World Bank for Africa, Dr. Obiageli Ezekwesili. In this final capsule cocktail, we share more of the main points, which make the full interview a must read:

‘Obasanjo Knew His Limits, But Jonathan…’

You worked under former President Obasanjo and saw the Jonathan government as on outsider. How would you assess each of these leaders?

I think the way to put it is that I served President Obasanjo in an environment where there was this sense that I had the freedom to drive the reforms that we agreed would be necessary for each of the aspect of the work I was responsible for. That’s important for me. I want to be able to know that I have unlimited freedom to be able to give my best to the work that I do. I don’t want to be wondering what’s going on around me, I want to be clear in my mind that the person who has given me a responsibility to discharge is absolutely committed to defending that responsibility.

Did you get that with Obasanjo?

I did. One of the things I say to people is that President Obasanjo knew the day he would have opened his mouth to say to me, ‘do something like this in Due Process’ I would simply have just have thrown in my letter and walked away…. For President Jonathan I cannot assess him as someone who knows him very well but I can assess him as a citizen and I can simply say that I was not impressed with his capacity to mobilise the efforts of even the brilliant minds he had and to provide a consistent direction for the necessary improvements that should have followed after the strong foundation was laid.

There were speculations that you may be invited to serve in the Buhari government. Were you approached at any time?

I have been a minister; I don’t have any point to prove. I gave six and half years of my life to the government of Nigeria. I worked on reforming the public procurement system, the NEITI, Solid Minerals as a minister and the education ministry too as a minister. People don’t also remember that I was part of the power sector reforms that overhauled the power sector for the unbundling of NEPA and its evolution into the DISCOs and the passage of the power sector Act. I was a key member of President Obasanjo’s economic team so, there is nothing left for me to prove. I am someone driven by a sense of assignment. I am not a job seeker, who does job for the sake of job, no. I am usually driven by a sense of assignment.

‘Igbo Have Not Taken Advantage Of Competitive Strength’

Orji Uzor Kalu recently said Igbos are their own worst enemies in Nigerian politics as many of them are more inclined to look after their selfish interests, do you agree with him?

What I would probably say is that we haven’t as Igbo people taken advantage of the greatest competitive advantage we have. The competitive strength that we have is that, of all the ethnic groups in this country, we’re the ones more open to being mobile and mobility means that we are so ready to collaborate. We are cosmopolitan and not provincial. This also means that we have a huge network of friendship that can help us get a lot of things done. But we have a tendency to be both mobile and insular at the same time. We now need to take advantage of this mobility as a people. A Nigeria that functions is of great benefit to the Igbo person. We should be working hard to ensure that this large country functions because we are very competitive in the things that we do.

So you don’t believe in the pro-Biafra agitation?

I believe that it’s our business to ensure that the Nigeria we found ourselves in now functions.

What factors do you think will shape 2017?

It’s going to be the cry of a growing population of young people for jobs. For 2017, it’s going to be jobs, jobs and more jobs. I don’t think that people are going to be able to sustain a living in 2017 without jobs. It’s going to be a very important topic not just for Nigeria but for countries worldwide.

‘For The First Time, I Saw Nigeria In Its Worst Form’

What is the source of your hope?

I just believe that there’s something divine about those girls; that our Chibok girls are divine and that there’s an Almighty God in heaven and in all of this a great testimony will come; that they came back and get another chance at life. I am hopeful for those girls. Each time I think of Esther Yakubu, the mother of one of those girls; she said to me ‘Aunty Oby, people say to me to give up, that the girl that would come back, even if she came back would not be my daughter, Dorcas. But I say to them, she’s my baby. No matter how she comes back I will nurse her back to being my baby that she was taken’ That’s a mother’s cry. (At this point during the interview she broke down), it’s tough, very tough. I saw Nigeria in its worst form. I saw Nigerians in their worst form. I saw our government in their worst form.