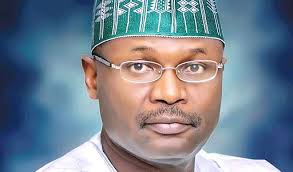 The Chairman of the Independent National Electoral Commission, Professor Mahmood Yakubu, has spoken for the first time on the video tape posted by Saharareporters showing Rivers State Governor Nyesom Wike, threatening to kill INEC officials for not doing his bidding during the December 10 rerun of elections in the state. The INEC chairman also spoke on the police officer murdered on duty.His response indicate that Wike’s problems may just be starting:

Have you been in touch with the family of the policeman murdered on duty during the election?

What is your response to the recorded conversation between Governor Wike and your staff, leaked to Saharareporters?

We have no immediate comment on the Wike tape. It is part of the comprehensive investigation we’re carrying out. It is, however, curious that Etche was mentioned in the tape.

What do you mean by Etche?

It is the Local Government that witnessed such massive disruption that we couldn’t declare winners in the 1Federal Constituency (Etche/Omuma) and 1 State Constituency (Etche II) for which reason we’re going back to the LGA early next year. The tape provides a useful clue to what transpired there.

What lessons have you learnt from Rivers?

After the 2015 general elections and the ruling of the Election Petition Tribunal virtually nullifying elections in the three senatorial districts, we returned for the rerun on March 16, 2015. Again the rerun was marred by violence. When we returned on December 10 we took extensive precaution and involved a broad range of groups and community leaders, to help keep the peace.

But once again violence reared its head. There were no less than 70 incidents of deliberate obstruction of the electoral process. Election duty personnel were harassed, abducted and physically assaulted. On election eve, thugs disrupted the delivery of election materials to the Registration Area Centres (RACs), a situation that prevented early deployment to the Polling Units on Election Day. Indeed, in many instances, we had to deploy directly from the Local Government Areas to the Polling Units (PUs), contrary to our plans. Amidst heavy shooting by political thugs, vehicles transporting materials and personnel to PUs were hijacked. Voter registers, ballot papers, result sheets and Smart Card Readers were brazenly snatched at gunpoint. The Commission has documented all these instances of violence and wishes to assure Nigerians that we shall carefully scrutinize them and take appropriate action under the Law as well as our guidelines and regulations.

We welcome the ongoing effort by especially the Nigeria Police, as the lead agency in election security, to investigate the circumstances leading to the gruesome murder of DSP Alkali Mohammed and his Orderly for which we understand that some arrests have already been made. Our sympathy goes to his family, as well as the families of all those who lost their lives, in the violence that has unfortunately become synonymous with electioneering and elections in Rivers State. We are confident that the security agencies will investigate all violations of the nation’s laws before, during and after the last re-run elections in Rivers State, including the alleged unsavoury roles played by actors in uniform. INEC will work with the security agencies to uncover and punish those who disrupted the distribution of election materials in Okrika and Gokana, the heavy shooting reported in Biata and Bodo, the hijacking of material in Andoni, Oyibo and Ogu-Bolu, the hostage-taking in Akoku Toru, the physical attack and kidnapping of election personnel resulting in the loss of ballot paper consignment for Ward 16 in Khana LGA and the unmasking of the identity of the thugs that threatened to burn down our personnel inside the vehicles conveying them to PUs in Etche resulting in the massive disruption that made it impossible for elections to be conducted in a substantial part of the Federal and State Constituencies in the LGA. We are also in contact with the security agencies to secure the release of 3 of our collation Officers whom we are reliably informed have been detained in a security facility in Port Harcourt for almost a week.

Working under extremely difficult and often life-threatening conditions, our electoral officials, both ad hoc and regular, discharged their duties dispassionately. We want to particularly recognize Professor Oji Onu Ekumankama, the Returning Officer for Rivers East Senatorial District, who was assaulted by unknown persons in uniform who also threatened to arrest him. Election materials, including results sheets and his personal belongings were taken away from him at gunpoint. Yet, he stood his ground, supported by the Divisional Police Officer (DPO) for the area, who offered to be arrested along with Professor Ekumankama. In the end, the defiance of the Professor and the DPO, as well as the arrival of the State Commissioner of Police, discouraged the assailants. Similarly, despite the head injury he sustained following an attack by political thugs, Mr. Chukwudi Curtis Odepke, an INEC staff, dutifully discharged his assigned responsibilities as the substitute Collation/Returning Officer for Emuoha/Ikwere before he proceeded for treatment in a hospital in Port Harcourt. In the same vein, one of our Electoral Officers, Ms. Mary Tunkuyo and two Corps members Mr. Agona Isaac (RV/16/A/0012) and Mr. Ademola Oluwalore Toba (RV/16A/2396), were physically assaulted and sustained serious injuries. We salute the courage of officers like Professor Ekumankama, the DPO, Mr. Odekpe, Ms. Tunkuyo, the young Corps members and many others like them who stood up to harassment and assault and discharged their responsibilities creditably. These are shining examples in our assessment of the events of 10th December so far.

However, the Commission is also aware of reports of infractions by some of INEC staff ranging from absence from their duty posts to partisanship in the discharge of their duties. We also acknowledge that in Ahoada East and West, a Supervisory Presiding Officer (SPO) unsuccessfully tried to abscond with ballot papers and result sheets. We are also investigating the allegation of bribery involving other staff, particularly those deployed to Etche and Ikwerre. We wish to assure all Nigerians that the Commission is instituting an administrative inquiry as part of a comprehensive review of the Rivers re-run elections. Needless to say that any INEC staff that is found to have disobeyed clear rules and regulations will be appropriately sanctioned.