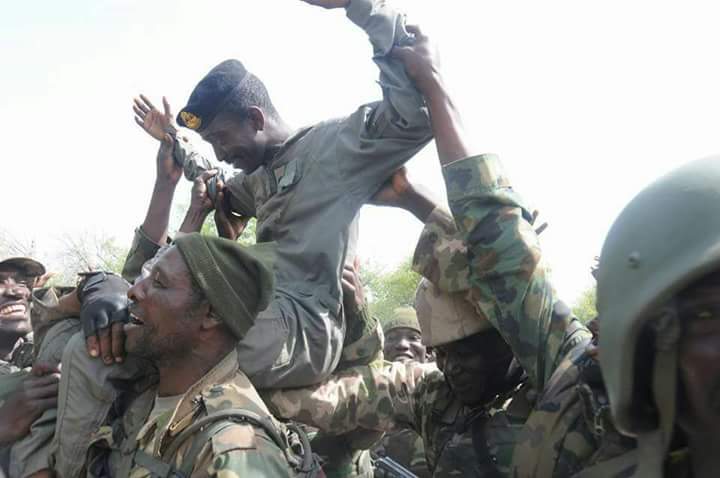 A military insider has given an insight into what may have been responsible for the death of Nigerian hero, Lt.-Col. Muhammadu Abu-Ali and other soldiers killed by Boko Haram on Friday night. This interview with Premium Times, an online news platform, is a compelling read:

We are sorry to hear of the death of Lt. Col. Abu Ali, a gallant and brave officer who gave his all to his country. We also learnt that he was killed alongside some soldiers. What really happened?

What happened was that Boko Haram terrorists ambushed our troops on Friday night at Mallam Fatori. Lt Col Abu Ali was killed on his way to reinforce troops there. Information available reveals that one officer and 49 soldiers were withdrawn from Mallam Fatori on Friday morning and Boko Haram attacked at night indicating they possibly had advance information of the troops reduction in number. Six soldiers and 14 Boko Haram terrorists were killed alongside Lt Col Abu-Ali, who was granted special promotion in 2014 for his gallantry in the fight against Boko Haram. There is great mourning across the theatre of operations. Everyone is in mourning mood. May God grant the senior officer Aljanat Firdaus.

But why are attacks and killing of Nigerian troops becoming rampant in the past weeks?

What is the true state of affairs?

The truth is that from September to November this year, we have lost so many troops that can’t even be accounted for. Prominent amongst those lost are Maj DS Erasmus and 8 soldiers – 25 Sep 2016 due to IED / ambush along Bama – Banki road. Lt Col K Yusuf and 83 soldiers missing in action on 16 Oct 2016 when Boko Haram attacked troops location at Gashigar. Lt Col M Abu-Ali and five soldiers were killed on 4 November 2016 on their way to reinforce troops at Mallam Fatori during Boko Haram attack. On 5 November 2016, two soldiers were killed at Kwada during Boko Haram attack on troops location. One soldier was wounded while another two were declared missing in action. In another attack in Kangarwa on 6 November, one soldier was killed while four other soldiers were wounded in action. Thirteen Boko Haram terrorists were killed and unconfirmed number of them was wounded.

Why are attacks on troops becoming more and more regular?

It’s dry season here and the ground allows smooth movement of vehicles. Boko Haram terrorists have a better knowledge of the local terrain so they can easily access troops location and escape.Furthermore, there’s pressure on Boko Haram terrorists around Sambisa general area hence they seem to have pooled forces together to concentrate on the northern Borno axis.

So what can Nigerian authorities do to reduce casualties on the side of Nigerian troops?

What kinds of equipment are obsolete, and what kinds are needed at this time?

The tanks (especially Vickers MBT) in the theatre are so worn out that they often do not get to action most times troops are under attack. This is why the semi-serviceable T-72 tanks are being moved everywhere in the theatre. This explains why Lt Col Abu-Ali was almost everywhere there was threat as he commanded the T-72 tank Battalion.The artillery Shilka guns are even the worst. Boko Haram terrorists fear the effect of Shilka guns but I still wonder why almost all Shilkas are not serviceable in the theatre.Even more worrisome is the fact that the Nigerian Army has not procured more Shilka guns because they are Russian made and the bottleneck to buy them is not too much like those of Western countries.

Unfortunately, for every battle we engage in, the equipment are wearing out;they were not procured with their fast-moving spare parts. The big question is, how many equipment has the present government procured and where are they deployed for use?

So does it mean troops are using just AK 47 to fight Boko Haram?

That’s our personal assault rifle, which is needed after long-range weapons have done much of the job but unfortunately the long-range support weapons are inadequate. Eg AA GUNS, mortar tubes, artillery weapons like shilka guns etc.

So how did we achieve the initial upper hand, cutting down Boko Haram down and capturing territories from the terrorists?

So how did we lose the plot?

Recall that there were mercenaries that fought with Nigerian Army troops in the first and second quarters of 2015.

Boko Haram seems to have good strategist who study our modus operandi and cause them to adjust accordingly. The Nigerian military may need to reappraise its approach to counter insurgency operations.Those mercenaries really assisted us and their withdrawal signalled the gradual regrouping of Boko Haram terrorists. This is because their withdrawal was sudden and not in phases.

But why was their withdrawal sudden?

The new government terminated their contract.

What did the mercenaries bring to the table that our troops lack?

They came with armoured fighting equipment. Above all, they had night fighting capabilities.

Do you have any further information on the attack that killed Lt. Col. Abu Ali?

There is a plan by the authorities to carry out an inquiry into the circumstances surrounding his death. He’s to be buried by 5pm today (Monday) at the national cemetery.

But why were the men withdrawn?

They were to carry out attack elsewhere in the theatre. The only controversy is why they were suddenly forced to withdraw that fateful day.

Is it not standard practice to have replacement on location before pushing men elsewhere?

It is, but exigencies of duty make us to do things haphazardly at times.