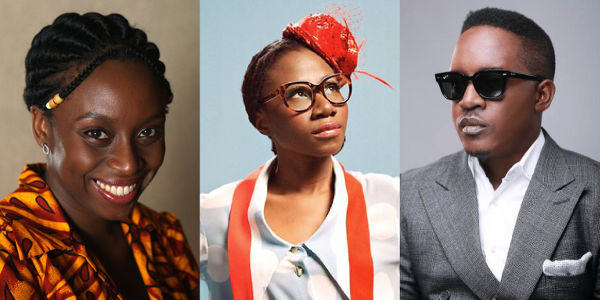 In this second edition in the Series, we present three Nigerians who have continued to inspire others, especially the younger generation.

She appeared on the  literary landscape in 2003, not just with a breath of fresh air but also very bold and visionary ideas.

From Purple Hibiscus to Americanah, she has continued to receive acclaim, at home and elsewhere, for stories told in an exceptionally strong, beautiful and lyrical manner.

Her fictional narrative on the Nigeria Civil War, Half of A Yellow Sun, became a history book of some sorts to many, who might have forgotten about that sordid milestone in Nigeria’s history and those too young to have been involved in that part of our country’s dark past.

In between writing award-winning novels and amassing laurels around the world for same, Chimamanda has also emerged as a fervent and relentless voice for women and the feminist movement. With her 2012 TEDx talk,”We Should all be Feminists,” she re-emphasized her stand and won many hearts, especially that of young people. And when parts of that famous talk were sampled in Beyoncé’s song, “Flawless” in December 2013, it appeared that was all the young fearless writer needed to emerge a hero for many young women who have long agonized over the subject.  In 2010, The New Yorker listed her among “20 Under-40.”  Her book, Americanah, was listed among the “Ten Best Books of 2013” that year by the New York Times and the BBC.

Ms. Adichie has become a positive force, especially among and to young women across the globe, constantly fuelling in them the desire to conquer by following their dreams.

Many have called her Nigeria’s Tracy Chapman and, truly, Bukola Elemide (Asa), is surely in a class of her own. In her world, perfection, breaking boundaries and originality are taken for granted.

The Nigerian-French singer has proved, over and over again, that being a global player, even in the very competitive music industry, shouldn’t always remain a permanent feature of one’s wish-list.

Her focus, hard work, creativity and sheer determination have all ensured she is up there among elite artistes, in the worldwide recognition of her outstanding ingenuity that has simply defied cultures and borders. Her first single, ‘Eye Adaba’, left many music lovers astonished at not just the strength of her romance-imbued voice but also the lyrics, with their refreshingly different slant.

After that came other eminent songs, including The Jailer and Fire on the Mountain, which came with such strong and wise messages no right thinking person could ignore.

In 2008, Asa clinched the Prix Constantin at the French Music Awards. Victoires de la Musique also nominated her for the “Female Artist of the Year” award in 2011. For many young people, therefore, Asa has become a role model who has proved that just by doing her thing and doing it well, dreams, no matter how lofty, do come true.

From playing a seven-key mini piano his mother bought him during his high school days, to becoming a United Nations Goodwill Ambassador in 2012, it has been an eventful ride for this charismatic rapper. In December 2008, M.I. released his critically-acclaimed debut album, “Talk About It.”

For Jude Abaga,  (M.I.), who is also the chief executive of Chocolate City Music, a music label, one can say without sounding patronizing that his towering achievements among his peers has amply compensated for his diminutive size and height.

Abaga’s music career began in 2003, a time there was enough competition to go round in the industry. Since it definitely took more than a passing interest or a little talent to stand out among one’s peers, M.I. truly excelled, since he achieved worldwide recognition as well as live his dreams. A producer, lyricist, songwriter and instrumentalist, this Jos-born artiste’s popularity among young people in Nigeria owes much to the sheer doggedness and focus he has always demonstrated in his career.

In addition, his electric performance during the different editions of the Glo X Factor show further endeared him to his teeming fans. M.I. has enough awards to show for his efforts, such as the MTV Africa Music Awards 2009, as well as a nomination in the Best International Act category at the 2010 BET Awards.