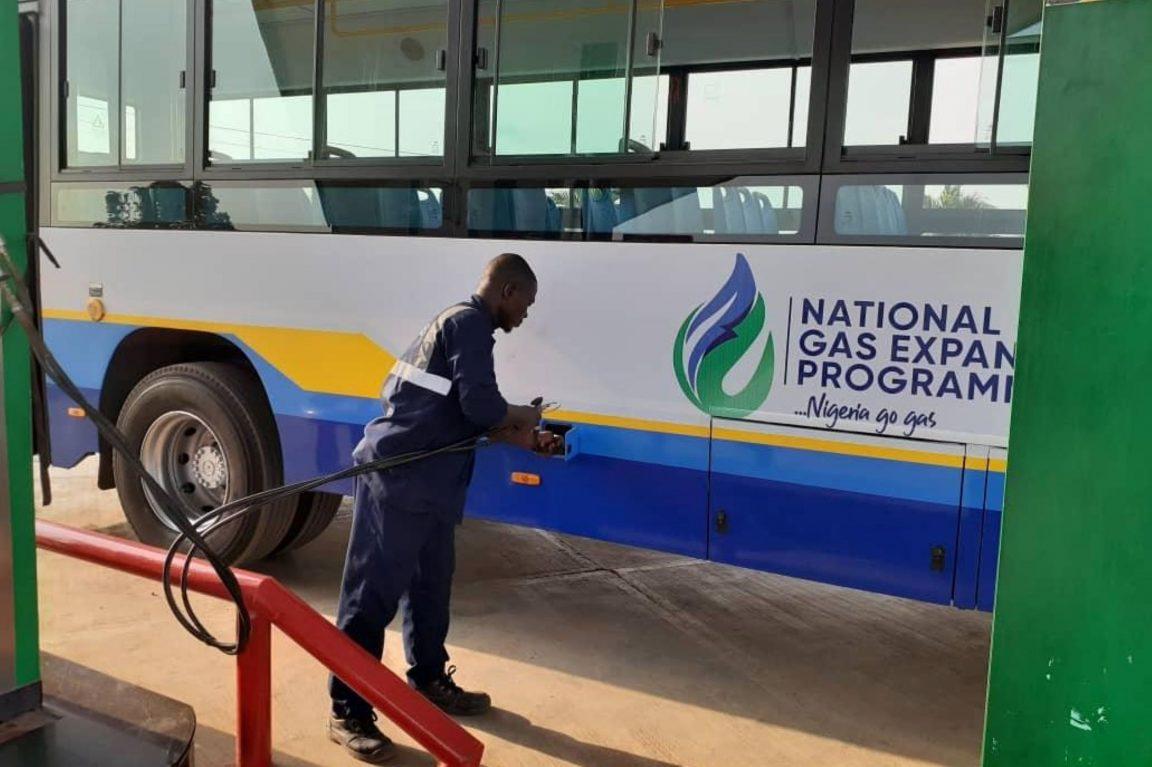 One of the CNG-powered buses.
22
SHARES
ShareTweetShare
PinShareShareShareFlip

President Muhammadu Buhari will on Dec. 1 roll out the autogas scheme in Abuja as the Federal Government moves to create alternative fuel for automobiles and other prime movers in Nigeria.

Dr. Mohammed Ibrahim, Chairman, National Gas Expansion Programme (NGEP), made the announcement at a meeting with media stakeholders on Saturday in Lagos.

He disclosed that cars in the presidential fleet had been converted to run on Premium Motor Spirit (PMS), Compressed Natural Gas (CNG) and Liquefied Natural Gas (LNG).

Ibrahim said the need to switch from PMS (petrol) to gas was necessitated by the deregulation of petrol by the government, which had led to increment in the pump prices in recent times.

According him, gas is a cheaper, safer and cleaner source of energy, hence the need to maximise its utilisation in Nigeria.

Ibrahim said the Department of Petroleum Resources (DPR) had issued new guidelines that were encouraging multi-fuel models for existing filling stations, which would be available nationwide within 30 months.

He said, ”We need about 500, 000 conversion engineers in the next 90 days to ensure that the retrofitting of the vehicles go as planned.

“Fifty conversion centres are currently upgrading for mass conversion and trainings and over 30,000 vehicles are already running on dual fuels in Nigeria.”

Ibrahim said to deepen domestic cooking gas usage, the NGEP had set up Micro Distribution Centres (MDC) nationwide to bridge the supply and accessories gap between the market and consumers.

He said the MDC scheme would create easy access of cooking gas to police and paramilitary barracks and private estates nationwide.

Ibrahim said the NGEP would also train 10 entrepreneurs from every local government area in the country in the areas of burners, cookers, accessories production and development of MDCs.

He said, “The 90 days training is being undertaken by the Nigerian Content Development Monitoring Board and the Petroleum Trust and Development Fund.

“These entrepreneurs will get their own foundries for manufacturing and will thereafter train others as time goes on.”

Ibrahim said the NGEP would thereafter push for an executive order banning the importation of these items into the country in order to create jobs for more Nigerians.

He said the committee was also working toward utilisation of gas to boost electricity supply across the country and was targeting a minimum of one megawatt per local government.

The Managing Director, NAN, Mr. Buki Ponle, at the event, commended the committee for efforts being made in actualising its mandate of deepening gas usage in Nigeria.

Ponle, represented by Mr. Tajudeen Atitebi, Acting Head of Lagos Office, NAN, expressed optimism that more Nigerians would key into the programme when some of the actions being taken by the NGEP become more visible.