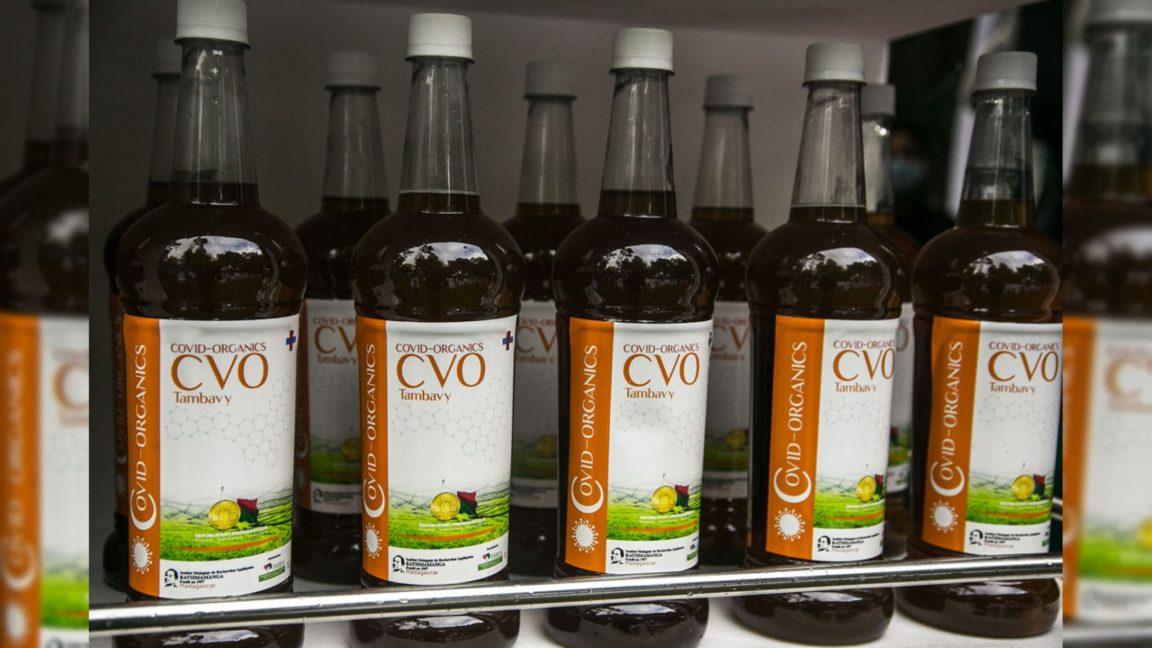 The made-in-Madagascar COVID-19 herbal remedy the herbal cure would be subjected to further tests when it gets to Nigeria / Photo credit: The Guardian
23
SHARES
ShareTweetShare
ShareRepostPinterest

In the fight against COVID-19, the war between biology and economics has just expanded to the nationalist front, spilling over with the ferociousness of a zero-sum game.

Madagascar President, Andry Rajoelina, believes that the reason why the world is not giving his country’s miracle herbal formula the accolade it deserves is because of its African origin.

If COVID-Organics had been developed in a US, European or Japanese lab, President Rajoelina said, he would not have had to answer all the questions about the safety, quality or efficacy of the herbal remedy, when hundreds of people are still dying daily from the virus.

I watched the YouTube version of one of the press conferences hosted by Rajoelina.

They asked him everything from proof of efficacy to clinical trials of the herbal drink and from why he thinks the World Health Organisation (WHO) does not believe him to the components of the herb, down to its most active ingredients.

He acquitted himself well and like a herbalist-in-chief sure of his talisman, he actually drank some of the stuff at the launch.

Through it all, he kept going back to two major points: one, in the current catastrophic global health crisis, every sovereign country has a responsibility to act quickly and expeditiously to protect its citizens; and two, Madagascar has found a tried and tested solution, which is working for its own people.

He rejected any suggestion that introducing the “preventive and curative” herbal remedy without clinical trials was unsafe.

How could it be when, as of that time, 105 out of 171 patients treated wholly and exclusively on the herbal remedy, had recovered?

He reminded his interlocutors that the Madagascar Institute of Applied Research, which supervised the invention of the herbal remedy, was also a regional centre for research, medical training and pharmaceutical experiments established by distinguished African scientist, Professor Albert Rakoto Ratsimamanga, 63 years ago.

The best proof that COVID-Organics works, he said, is not the result of clinical trials.

It is whether or not it is saving lives in a world bleeding profusely to death, where the next dependable preventive or remedial cure is still thousands of deaths and many months of uncertainty away.

And that urgency probably also explains why the number of COVID-Organics subscribers has grown from zero on April 20 when it was launched, to 20 countries as of the time of writing.

As of April, two French doctors were discussing on live TV how nice it would be to use Africa as playground for a trial vaccine, as it was with HIV/AIDS trials.

Even international press coverage of Rajoelina’s press conference carefully omitted his allegation that WHO still allowed the circulation in Africa of so-called clinically tried and approved drugs that have been implicated in significant fatalities on the continent.

We have also seen before that even with the best of intentions and in spite of internationally approved clinical trials, things can still go wrong.

Africa has been underserved – and unfairly so – by the designation of the so-called regional vetting centres, which make the US, Europe and Japan main hubs

Pfizer’s lethal misadventure in Kano, Nigeria, with the experimental drug Trovafloxacin (Trovan), claimed over 100 lives and forced a recall and out-of-court settlement after years of stonewalling.

Wemos, Switzerland-based healthcare advocate, has published reports of unethical clinical trials in Egypt, Kenya, Zimbabwe and South Africa, a number of them still active, and ignored by WHO.

According to a BBC report in September last year, while pocketing about $1.1m in sales, the French drug company, Servier, turned a blind eye as Befluorex, which was used to treat diabetes, was also prescribed as a weight-buster.

In spite of global outrage and 2,000 deaths linked to the drug, it remained on shelves across the continent for over three decades (1976-2009).

At a time when deaths from the virus were mounting and many jurisdictions were hiding the therapies used for recovering patients, Madagascar’s President must be praised for his honesty and openness

Yet, in a desperate effort for a cure – and perhaps to earn some revenue, not to mention the fame that might come with it – Rajoelina just might also be trading long-term gain for short-term advantage.

He must tread softly.

He has had a life of adventure, daring and courage.

At 19, he set up his own business, an event company called Show Business, defying his parents’ intention to send him to university.

He later consolidated Show Business with other investments in digital printing, TV and radio, and joined politics.

A former mayor of the capital city, Antananarivo, he was elected President in January 2019 and has never shied away from calling a spade by its name.

There is no doubt that Rajoelina means well and is passionate to save lives.

At a time when deaths from the virus were mounting and many jurisdictions were hiding the therapies used for recovering patients, Madagascar’s President must be praised for his honesty and openness.

If, however, he invests a bit of the energy and zeal that he has used to market the herbal tea in a collaborative global effort to find a solution to the pandemic, Madagascar and the whole world would be the better for it.

One important lesson the virus has taught us is that the world needs solidarity and cooperation, not lone-rangers and secret agents.

“Clinical observations”, which he prefers may be the expedient threshold in a crisis, but it is not sufficient and cannot be a replacement for clinical trials, to which he is so bitterly opposed.

He should take advantage of the WHO window of solidarity trial which started in April, shortly before the herbal tea launch.

One important lesson the virus has taught us is that the world needs solidarity and cooperation, not lone-rangers and secret agents

According to Nature, 25 countries have so far enrolled in the global effort for vaccine trial, which will cover four therapies: remdesivir, an experimental antiviral drug; chloroquine; a combination of lopinavir and ritonavir, used to treat AIDS; and that combination plus interferon beta.

Africa has been underserved – and unfairly so – by the designation of the so-called regional vetting centres, which make the US, Europe and Japan main hubs.

But WHO’s solidarity experiment, which is global and all-inclusive, can and should accommodate Madagascar’s herbal tea.

That would be a good thing for the biology and economics of the tea.

Its most active ingredient, neem leaf (dogonyaro in many parts of Nigeria), comprises nearly 62 per cent of the ingredients and its extract, also a property of artemisia-based therapy, is widely used as malarial treatment in many parts of Africa and Asia.

Without proper clinical trials to establish the quality, safety and efficacy of the medicine, Madagascar will not get or secure its patent right

The devil is in the detail of the remaining 38 per cent of the constituents of the herbal tea which Rajoelina has, so far, refused to disclose.

Perhaps he has done so for patent reasons.

But without proper clinical trials to establish the quality, safety and efficacy of the medicine, Madagascar will not get or secure its patent right.

It’s also important to keep in mind that the essence of global standards and quality is not that some rogue products will not occasionally pass through the needle’s eye.

They will, but a tested framework can more easily hold producers to account.

For a poor country, Madagascar would make quick bucks from desperate short-term subscriptions.

But the real long-term value – protecting its intellectual property; product improvement from clinical trials; larger share of the economic benefit from the global market; and the satisfaction of being in solidarity with others to save more lives – may be diminished by the president’s corner-shop mentality.

After only one cup of the Madagascar tea, most adult Africans will simply brew their own version from the neem tree leaf in their backyard.

Neither Rajoelina nor anyone genuinely interested in seeing Madagascar on the big stage wants a counterfeit ending.