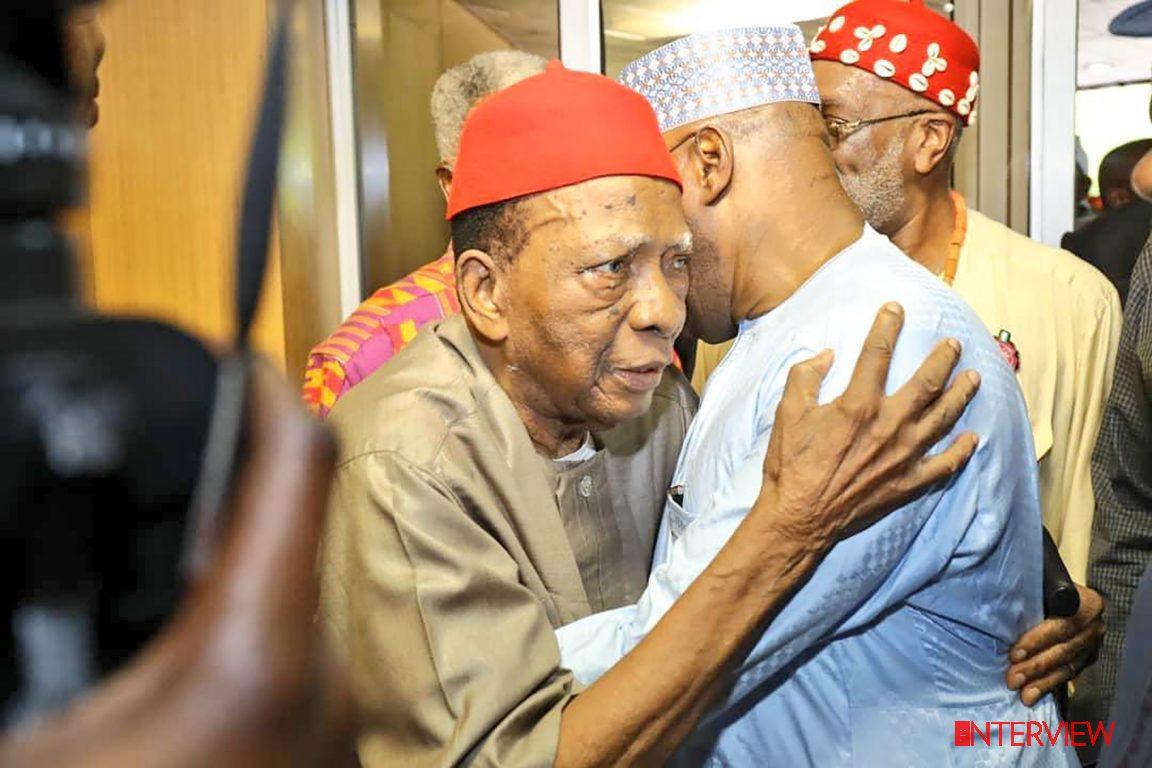 One version made Nwabueze look like a frightened, forlorn child embracing its mother. Of course, it wasn’t meant to be anything of the sort.

But even from the more respectable versions, it is difficult not to come away with the impression that the photograph is symbolic of the growing feeling in the south east that after a long, harrowing spell in the wilderness, Ndigbo might well be on the verge of finding rest in the bosom of the PDP.

I can live with that, if it was only a sad thing – which it was. But it’s worse than sad. The unspoken emotion conveyed in that photograph is that of a lost and confused people so desperate to find their way that any way now appears the right way.

Is it resentment, desperation, amnesia or a malignant combination of all these? I don’t know. But whatever it is, it is a tragedy worse than sadness, and here is why.

After the civil war, 1998 was the best chance for Ndigbo to regain their footing on the national stage. That year, one of its most outstanding political leaders, post-military era, Alex Ekwueme, was gunning for the presidential ticket of the PDP.

Ekwueme was not just another politician. He was one of the finest breeds, a reminder in more ways than one, of the legacies of the great Nnamdi Azikiwe, Nigeria’s first governor general and ceremonial president. For four years, Ekwueme was vice president to Shehu Shagari and, remained, till that government was brought to an abrupt end by a military coup, one of its shining lights.

That is not the end of the story. When the military regimes of Ibrahim Babangida, and later, Sani Abacha, decided to take the country for a long, expensive ride after years of useless experimentation with transition to civilian rule, Ekwueme was among the few who shunned their hubris.

“Who bewitched Ndigbo to the point where they are not only making Buhari’s 97-5 per cent gaffe sound like a deserved admonition, but are actively working to achieve an electoral equation, which may well be: Ndigbo + PDP = 2027?”

He was the leader of the G34, a group of mostly seasoned and principled politicians, determined not to accept Abacha’s plan to sit tight. It was a dangerous thing to do at the time, but Ekwueme and others – including members of the civil society – refused to be cowed. They stood firm until Abacha died unexpectedly.

At the Jos convention, however, when it was time for the political elite to reward the sacrifice of Ekwueme and others by putting him forward as the PDP’s presidential candidate, the music changed. The PDP, this same PDP posing as the messiah of Ndigbo, betrayed Ekwueme. They betrayed him on the cusp of what was potentially the best chance of Ndigbo to return to the national stage.

Just like it happened at the last October PDP convention in Port Harcourt, Rivers State, the same General Aliyu Gusau, the most dangerous man alive in the PDP and harbinger of Governor Nyesom Wike’s misery, was the one who told PDP leaders in Jos that the military did not want Ekwueme. It was Olusegun Obasanjo or nobody.

It was a personal betrayal for Ekwueme, but a collective humiliation for Ndigbo – a humiliation from which the nationality has yet to recover.

If the betrayal of Ekwueme and the humiliation of Ndigbo was, well, a matter of political expediency, the 16 years of the PDP that followed did not show that the ruling party at the time had much respect for Ndigbo. It’s true that Obasanjo had a few serious-minded and competent Ndigbo in his cabinet, but the most influential were the thugs – those who kidnapped governors or helped with other dodgy deals.

It didn’t also help the image of Ndigbo that in a series of accidents apparently designed to make them look incompetent and irredeemably transactional, two presidents of the Senate – Evan Enwerem and Chuba Okadigbo – were toppled within one year over largely spurious allegations of name misspelling and corruption. It was a deadly political game in which a few influential Igbos did not mind complicity or the tragic irony in being their own worst enemy.

Till the end, Atiku, the new surrogate mother of the south east, was a part of the Obasanjo government. To be sure, the man had his own problems with Obasanjo, but like Siamese twins, both were joined at the hip. In the eye of history, they must both take credit for the good, the bad and the ugly.

Did President Goodluck Jonathan offer Ndigbo a better PDP deal? Jonathan was Obasanjo’s response to the southern minority’s displeasure over years crude exploitation. But beyond the “Ebele” in the middle of his name, Jonathan also represented Obasanjo’s token appeasement to south-eastern cries of marginalisation. He was the single stone that might have killed two political birds: exclusion and resentment.

But it didn’t happen. Under Jonathan’s PDP, Nigeria made more money from the sale of crude oil than General Yakubu Gowon might have dreamed of when he said spending money, not making it, was Nigeria’s problem. The government promised to finish the East-West Road (the most strategic in the area), build the Second Niger Bridge, dredge the River Niger, expand and modernize the Onne Port, and tackle erosion.

“Till the end, Atiku, the new surrogate mother of the south east, was a part of the Obasanjo government. To be sure, the man had his own problems with Obasanjo, but like Siamese twins, both were joined at the hip.”

By the time Jonathan was voted out in 2015, local contractors – including those handling the projects listed – were being owed over N900 billion. Not that there was no money to pay: Nigeria earned an estimated N51 trillion from the sale of crude oil under Jonathan. But paying money for honest work or investing for the public good was just not a PDP thing. It’s a party of money and power, but not of value. As we say in my neck of the woods, “PDP! Share the money!”

Those liabilities have now been substantially settled; while two years ago, contractors on the Enugu-Port Harcourt Road were paid the 15 per cent, after which they returned to site.

But a vocal section of the Ndigbo elite is too anxious trying to find a surrogate mother to remember the past much less care about the future. Egged on by the leadership of Ohaneze and Afenifere, neither of which has sponsored any candidate to win a local council election, the vocal minority campaigning for PDP may just be about to repeat the mistakes of the past.

The politics of resentment has been, at times, inflamed by the comments of President Muhammadu Buhari or the perception that his appointments have been tribal and incompetent. Or that his government has been heavy-handed in dealing with separatist agitations in the south east.

I don’t agree with the latter part; that letting Nnamdi Kanu play with fire is the best way to go. And even if those who criticise Buhari’s clannishness are right, embracing PDP is like embracing burning coal.

“I don’t agree with the latter part; that letting Nnamdi Kanu play with fire is the best way to go. And even if those who criticise Buhari’s clannishness are right, embracing PDP is like embracing burning coal.”

Apart from some prominent politicians jumping ship one way or the other or the new PDP leadership apologizing at gunpoint for God-knows-what, there’s nothing about the party that demonstrates that it’s about to turn a new leaf. There is yet no evidence that this is a party we can trust.

Instead, the comments of the high-profile defectors suggest that they left because they were frozen out of the “pie-sharing” in the last four years and only returned to the trough because they think that is where their appetite would be best served. It’s not about inclusion, a new philosophy, or a fresh perspective for the south east or anywhere else for that matter. It’s about dem-dem.

There was a time in Igboland when the tail, no matter how nourished by filthy lucre or inexplicable wealth, would not dare to wag the dog of hard work and personal achievement attained by striving. It now appears that something is broken. The tail not only wags the dog, children hardly out of diapers are leading the dog by the nose.

Who bewitched Ndigbo to the point where they are not only making Buhari’s 97-5 per cent gaffe sound like a deserved admonition, but are actively working to achieve an electoral equation, which may well be: Ndigbo + PDP = 2027?

It is a desperate state, one in which just about anyone looks like a surrogate mother. Tragic.