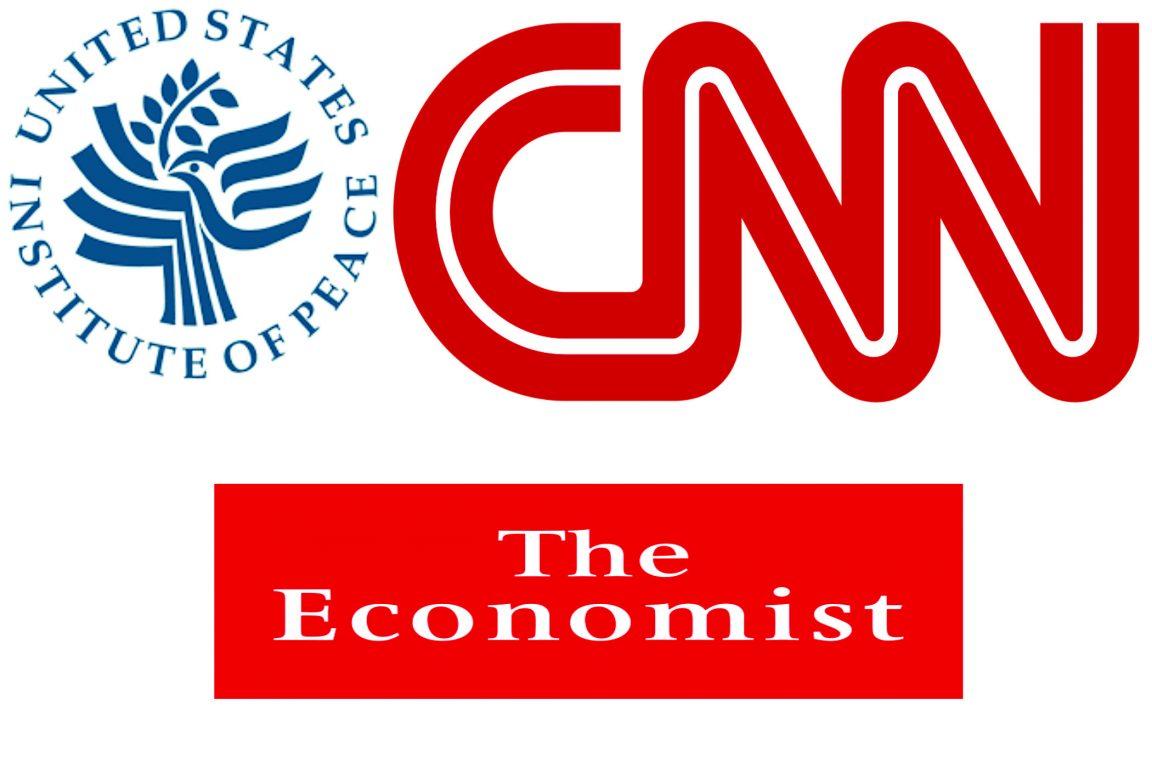 It matters a lot to our politicians what the foreign press or agencies say about them, especially about their electoral chances. If foreigners, particularly those in London or New York, say something nice, our politicians take it to heart and repost as far and wide as they can. If not, they get mad.

In recent times, forecasts about the outcome of the 2019 elections by the Economic Intelligence Unit of The Economist of London, and the United States Institute of Peace, have been hotly debated. In its two forecasts so far, The Economist favoured former Vice President and presidential candidate of the Peoples Democratic Party, Atiku Abubakar, to win.

The newspaper said its predictions were based on the promise of Atiku to re-invigorate the economy with pro-market policies. Also, it said the election might favour Atiku because of the failure of the government of President Muhammadu Buhari to deliver on its promises of jobs, as well as growing poverty and insecurity in central Nigeria.

The Atiku camp promptly seized on the predictions as endorsement of sorts and, clinking glasses in a mock celebratory toast, smiled to one another in excitement that victory might be closer than once thought.

“There’s nothing in The Economist or USIP or a dozen other electoral predictions by the foreign press or agencies that we should be taking too seriously. We may not dismiss the reports as nonsense, but I think we must grow up and stop treating them like gospel.”

It wasn’t long before the Buhari camp also got something to cheer – or so it would seem. The United States Institute of Peace (USIP) issued a report on a survey in Nigeria focused on preventing electoral violence. Unfortunately, those eager for an answer to The Economist, put a spin on the USIP report to suggest that it predicted likely victory for Buhari next year.

But seriously, there’s nothing in The Economist or USIP or a dozen other electoral predictions by the foreign press or agencies that we should be taking too seriously. We may not dismiss the reports as nonsense, but I think we must grow up and stop treating them like gospel.

How was it that these same editorial oracles didn’t see the 2007-08 financial crises coming? In fact, if some of the forecasts at the time were to be believed, the world was going through its most glorious era ever.

It was boom, boom, boom and the global financial system was supposedly awash with enough credit to meet every need and to spare. Yet, just when everyone thought it was peace and safety, the bubble burst, leaving the world in one of the worst financial crises in decades.

Two years ago, the oracles bit the dust again, big time. It happened in the political arena in the US, right inside the oracles’ shrine. Donald Trump was supposed to be a joke. That was virtually what all the forecasts said and even those in Trump’s campaign believed it and sometimes treated one another like jokers.

Hilary Clinton was going to be the 45th President of the United States of America, shattering the last vestiges of the glass ceiling in a historic landslide.

Well, it didn’t happen, and the oracles conveniently invented the angry white middle class voter as the reason. Not that this effigy ever went anywhere in the eight years of Barack Obama. It just happened that the oracles couldn’t figure it out.

“How was it that these same editorial oracles didn’t see the 2007-08 financial crises coming? In fact, if some of the forecasts at the time were to be believed, the world was going through its most glorious era ever.”

They still can’t. If you watched CNN, the result of the mid-term elections in the US was not supposed to be a shellacking for Trump, the eventual beginning of the end. But it’s looking a bit like the end of the beginning of another mis-hit.

The Economist may say what it likes about Nigeria, but it won’t vote in February. We were here when the newspaper called out the buffoonery and incompetence of the PDP government in 2014, and it was right. But that was the best it could do; it was up to us to vote out that government and we did.

We were also here when a US think tank predicted that the 2015 election might signal the end of Nigeria as we know it; but the forecast came to nothing.

Let’s get this straight. The 2019 presidential election is going to be one of the most hotly contested. It would also be a potential nightmare for the oracles. The default template of north-south, Christian-Muslim, majority-minority, which is the favourite hot button of the West, is absent this time.

Buhari and Atiku are as northern, as Hausa-Fulani, as Muslim, and as majority as any two front-runners have ever being in a contest in the history of Nigeria’s party politics.

So, the oracles have to look elsewhere for a forecast that makes sense. And saying, like The Economist did, that the battle will shift to the south, does not sufficiently explain the likely outcome of the vote.

The rise in deadly conflicts in large parts of the north central in the last few years could play in the poll, but there are still large pockets of Muslims in these areas with strong sympathy for Buhari.

Also, just like the closet effigy of the white middle class male voters that the oracles failed to account for in the last US general elections, there remains a considerable politically active mass of Buhari followers in the north, unreached by and completely indifferent to the press or its extensions on social media.

“Atiku is weak, very weak, on corruption; he is our own version of Jacob Zuma, and The Economist may pretend not to know, but that’s why the corporate Nigeria likes him.”

It’s correct that a number of the generals who played an active role in returning Buhari to power in 2015 have fallen out with him and are now actively supporting Atiku. This group is still quite influential and its support valuable – that was why Atiku went to extraordinary lengths to court them. Yet, it was the coincidence of the common threat that they face in a Buhari re-election that made their reunion inevitable.

The rich among the generals are maddeningly rich and still, well, dangerous. But there is also the risk of over-estimating their influence. Since 1999, there has been a steady decline in their power and influence, a process instigated and ferociously pursued by former President Olusegun Obasanjo.

Their influence has waned progressively to the point where military generals have been exposed and a number of them are standing trial for allegedly diverting funds meant for the war against Boko Haram.

There is yet another army whose pro-Atiku motive was not fully accounted for in The Economist forecast. That army is corporate Nigeria. In almost every election since the Obasanjo days, corporate Nigeria has continued to play a prominent role in deciding who becomes president.

“The 2019 presidential election is going to be one of the most hotly contested. It would also be a potential nightmare for the oracles. The default template of north-south, Christian-Muslim, majority-minority, which is the favourite hot button of the West, is absent this time.”

The Economist is correct that this group tends to be more comfortable with Atiku, but to attribute that to his pro-market lip service is to be economical with the truth.

Atiku is weak, very weak, on corruption; he is our own version of Jacob Zuma, and The Economist may pretend not to know, but that’s why the corporate Nigeria likes him. Before Zuma came across the word, “state capture”, the Obasanjo-Atiku government had launched a privatisation regime which was as audacious in its attempt to liberalise the economy as it was capricious in its corrupt enrichment of the Obasanjo fans club – a club in which Obasanjo and Atiku were major actors and beneficiaries.

The full story of Pentascope and Transcorp – both whited sepulchres from the that era – may yet be told some day.

It’s also interesting that the newspaper thinks that the election will be a two-way race. I doubt it. With 29 other presidential candidates in the race a number of them fighting tooth-and-nail for every single vote, the combined effect of their presence could affect the outcome in the tight race ahead.

My forecast is that, once again, the oracle has its humble pie already cut out for it. No need to lose sleep.