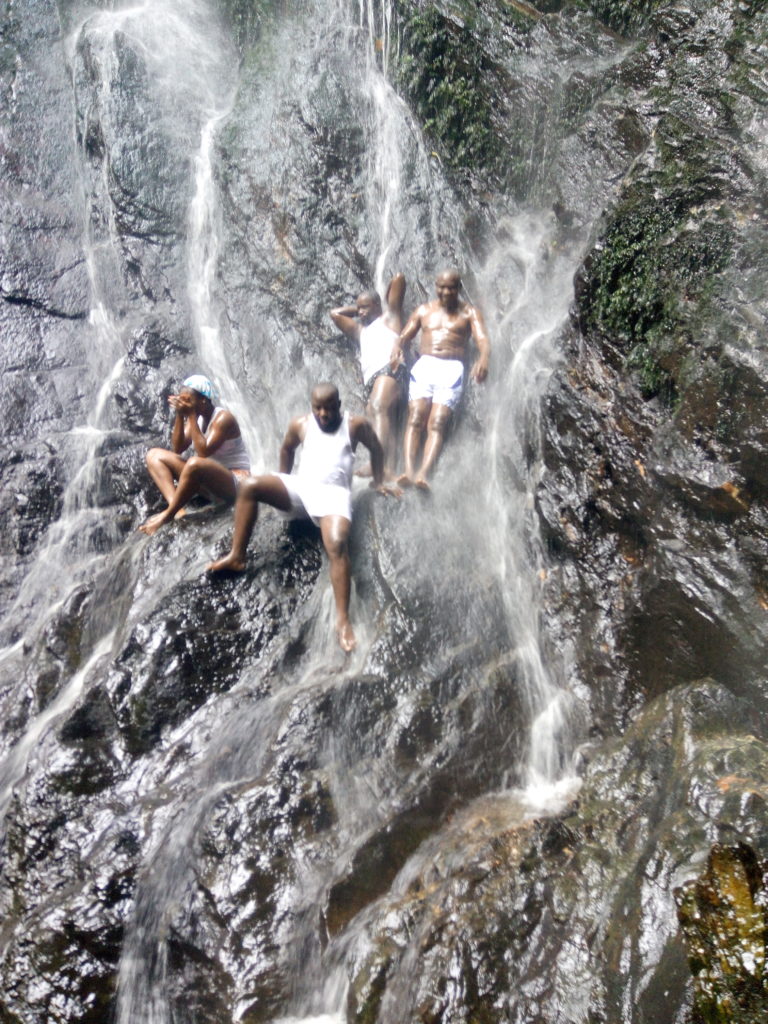 A tour of the State of the Living Spring, Osun State, is not complete for a tourist without a visit to Erin-Ijesa in Oriade local government. You might be wondering why a tourist will need to take such trip from the state capital, Osogbo, which is home to the popular Osun groove.

The answer is the popular Olumirin Waterfall in Erin-Ijesa in Oriade local government.

The waterfall, according to Engr. Abimbola Daniyan, a former Senior Special Adviser to Osun State Governor and Chairman, Tourism Board, is the most visited tourist site in Nigeria today.

The waterfall located at two km off Erin Ijesha town is said to have been discovered by a woman called Akinla, founder of Erin-Ijesha town and a granddaughter of Oduduwa, the progenitor of the Yoruba race, in the year 1140 AD during the migration of Ife people to Erin- Ijesa. Legend also has it that when it was first discovered, the waterfall had the shape of a mysterious being.

Travelling in the company of three other tourists I met at the Ilesha Park in Osogbo, we arrived at Ilesa from where we had a one-hour ride to Erin Ijesha for N1, 000.

You can either take a motorbike to the Waterfall or walk down. At the entrance to the waterfall, there is an entry fee of N500 required. Thereafter, you can either pay a tour guide to take you around or find your way.

I was spellbound seeing the seven layers of rocks as the water flows majestically among the rocks and splashes down with great force on the vegetation around like a mysterious figure indeed.

The breeze at the waterfall is cool and refreshing. The whole scenery is fascinating and idyllic. I tried comparing the scenery with that of Agbokim waterfall in Cross River State.

What I saw at the Olumirin waterfall is like the collection of seven cascades which pour over a cliff creating an impressive seven-part waterfall as in Agbokim Waterfalls.

As we savour the surroundings of the waterfalls, the tourist guard on duty, Oluwole, explains that when it was first discovered that no one dared move near it for fear of being swallowed up.

“It was believed to be a living spirit through whose several mouths water gushed out; a very tall and huge spirit whose height reached to the high heavens. The inhabitants, therefore, named the fall Olumirin.

“They thought this was another god whose power over the whole area was only similar to Akinla, the founder of Erin Ijesha town.”

After visiting the waterfall many a tourist has remarked that it doesn’t look like anything out of this world until one begins climbing the seven levels of the ascending plains of the waterfalls.

Really, climbing the Olumirin waterfall is not for the feeble-minded. This is because the Waterfall cascades in seven different phases and only a handful have been able to go all the way to the seventh phase.

However, the last and seventh level is definitely the most intriguing, well that’s if one ever dared the torturous climb.

The tour guard seeing the panting of some of us said only a few tourists can climb beyond the second layer.

He said, “Climbing up to the third level can best be equated to traipsing the snowy steeply Mount Everest.

“The area can also serve for mountaineering exercise. Obviously, being at these different levels and just basking in the invigorating freshness of the falls is an unforgettable experience.”

But guess what? The place to be is definitely the seventh level. Why? Not only does it lie at the peak of the falls, it also hosts a settlement where many of its inhabitants have lived for several years!

Each fall distinctly marks the mystical propensity of the fountain. Its ability to sieve out the adventurous from the lily-livered enjoys universal acclaim.

Ascending the first steps that point to the first fall is usually for all. Though its dancing bridge and the mold covered greenish stones leave a barefooted adventurer squirming in pain, yet the first fall is all-embracing. Like a mother, she opens her bosom for all visitors to the fall to soup from her clear spring.

A tourist, Wale Folarin, narrating his experience at the falls said, “My eyes beheld beauty. I saw, touched and tasted beauty. I flew off on the wings of contemplation. As the water, like a snake lazily sliced through the heights, it picked up velocity that slapped the flesh, pumping out like an imprisoned rebel through the thickness of the woods. The third fall was something else…”

Yet another dazed visitor said, “The breeze at the waterfall is cool and refreshing, the water flows among rocks and splashes down with great force to the evergreen vegetation around. The whole scenery is fascinating and idyllic.”