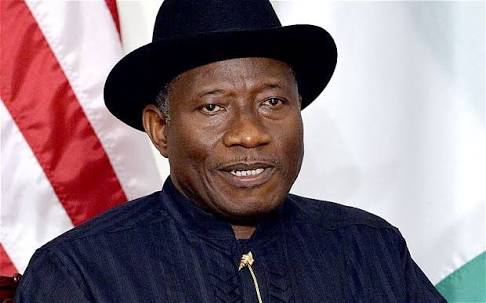 At last, former President Goodluck Jonathan appears to have found his mojo. In recent speech after speech, he’s been taking the fight to the doorstep of the ruling All Progressives Congress and causing quite a stir.

Until now, the only thing Jonathan could remember as his achievement after six years in office was the transfer of power.

Yet, he often spoke about this considerable feat in whispers at the end of which he would usually remark, almost as an afterthought, that it was also on his watch that Nigeria became Africa’s largest economy.

That awkwardness is changing. At the recent non-elective convention of the Peoples Democratic Party in Abuja, Jonathan, who led his party to a historic defeat in 2015, made one of his boldest statements yet.

He said that apart from a few loopholes that he failed to plug, President Muhammadu Buhari’s government could so far not compare with his record of performance in office.

He spoke about the stable prices of agricultural produce in spite of a major flood in 2012; his government’s programmes and policies that were copied in other parts of the world; the sterling qualities of his cabinet; and the reduction of inflation to a single digit.

When the crowd thought he had finished, he blew his trumpet one more time, declaring that the sunshine at the Eagle Square on that day was the irrefutable sign that if God was not a member of the PDP, then he is the party’s most ardent cheerleader.

Jonathan’s comment obviously provoked the DG of the Voice of Nigeria Osita Okechukwu, who took up the former president for God and party.

But why? Why was Jonathan’s comment more concerning than the performance of the APC government since it assumed power over two years ago?

Okay, Jonathan tried to understate the massive corruption in his government, his loss of grip and the devastating effect of his incompetence on the country. Diezani Allison-Madueke alone was more than a loophole. She was a black hole that sucked and sucked.

At an average of $120 per barrel for nearly four years, the country made more money than sense and Jonathan couldn’t resist the temptation of running a government of pirates, by pirates, for pirates. A “piratocracy”, if you like.

But that was supposed to have ended two years ago. Voters took their revenge at the poll and voted Jonathan and PDP out for the change that the APC promised.

It’s a waste of time getting mad at Jonathan for giving himself a pass mark where voters had failed him. The question Okechukwu should be asking himself is whether the APC government will pass the electoral test that the last government failed, if an election were held today.

The embarrassingly plain answer is no.

Buhari has dealt a serious blow to Boko Haram and retrieved local governments seized by the terror group in the North East; but new franchises of violence – kidnappings, a rash of separatist tensions, attacks by herdsmen and armed gangs – have left the country on edge.

Buhari said if Nigeria does not kill corruption, corruption would kill Nigeria. The fight against corruption has been audacious in ambition and it’s not business as usual.

But it should worry Okechukwu that intra-agency infighting, intra-party rebellion, malicious half-measures by government insiders and outright complicity in a few cases, have severely hobbled the fight against corruption, causing more damage than any supposed fight-back by corruption has done.

Where Jonathan covered up corruption with his party’s rickety umbrella, Buhari’s government has attempted to sweep it with a few loose sticks of a frazzled broom. Attempts to reform the judiciary are stuck in the mud. But let’s face it: in this war on corruption, the government is sometimes its own worst enemy.

For example: if the government was trying hard not to offend any special interests by publishing 1) the full details of recovered loot from 1999 to date, and 2) the full list of looted funds recovered under the present government and the names of the looters and the amounts involved, the court judgments obtained by Socio-Economic Rights and Accountability Project (SERAP) should have been a convenient excuse to slay any sacred cows.

That was not what Buhari promised and that should worry Okechukwu more than any bombastic claims to sainthood by Jonathan.

The economy was worse than most expected at the time Buhari took over. A collapse was inevitable regardless of what Jonathan says. When Buhari took over the crisis of expectations only made things worse.

If Okechukwu was in this country, however, he might agree that if corruption and incompetence under Jonathan set the stage for the collapse of the economy, Buhari’s slow, confused and hardened response hastened it. And with what we know now, the awkward and confused state of affairs may have been compounded by the President’s fragile health at the time.

There’s no need to blame Jonathan or to be mad at him. Instead, if Okechukwu still has any clout in the circles that matter he would do well to advise his people to learn from what happened to Jonathan’s government.

Jonathan did not lose in 2015; he lost at least three years earlier. The first clear signs that his government would fall appeared in January 2012, barely one year after he took office in defiance of a supposed “gentleman’s agreement” not to run. The subsidy riots exposed the government’s rotten core and prepared the ground for what happened three years later.

The writing is on the wall and die-hard supporters of the Buhari government who are too embarrassed to admit it openly are nursing their grief privately. There’s trouble ahead.

Buhari’s government has two more years to go and Okechukwu’s concern should be how the government can recover grounds lost to the increasingly growing feeling of despair and frustration.

The last three months of the President’s absence have been particularly difficult both for those who wish his government well and those who don’t. The former group is keenly aware that every single day he spends away strengthens the hands of “the hyenas and the jackals”, the latter is keenly aware, too, that even if they push him over the edge, there’s no guarantee what happens next or that it would be in their favour.

What both sides have in common is a feeling of déjà vu complicated by frustration.

Okechukwu should be thankful that APC has a scapegoat in Jonathan to learn from.