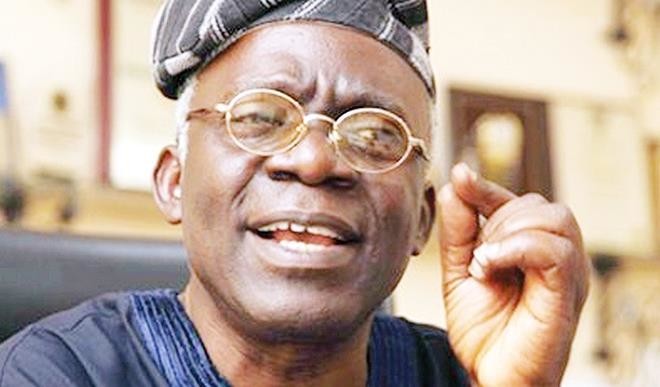 The statement on Sunday by a group led by human rights lawyer, Femi Falana (SAN), about “unrealistic” recommendations contained in the 2014 National Conference report must be turning heads in political circles.

Apart from the fact that Falana was a member of the Conference that made the recommendations, he’s a man whose views on any subject cannot be taken lightly.

It appears that out of the dozens of recommendations by the Conference published in two separate reports of 762 pages and 360 pages, the only noteworthy thing, according to Falana, is the recommendation for the justiciability of Chapter 2 of the 1999 Constitution.

“The most important recommendation adopted at the Conference,” the statement said, “is that the fundamental objectives enshrined in Chapter 2 of the Constitution be made justiciable. We wish to emphasise that where education and health are made accessible to all citizens, a living minimum wage is paid as when due, unemployment benefits and pensions are paid promptly, housing is provided for, the rights of citizens to live peacefully in any part of the country is guaranteed as envisaged by Chapter 2, the threats to national unity will disappear.”

If, like me, you are sometimes constipated by the language of politics, what Falana means is that once citizens can enforce the objectives currently used as decoration in Chapter 2 of the Constitution, including the rights to education and health, among others, everything would be fine.

That may be true in George Orwell’s Animal Farm, in Shehu Sani’s zoo, or perhaps in the museum of some old socialist state. But it’s very, very unlikely that in Nigeria of 2017 a socialist peace offering, even if backed by law, can get us out of the present mess, which promises to get worse before it could get better.

Let me be clear.  I was not a huge fan of the Conference because I thought that former President Goodluck Jonathan wanted to use it as red herring. I thought it dubious, if not subversive, for him to delay the inauguration of the Conference till the tail end of his administration when he would be unlikely to carry its resolutions through.

But my objection is not important. I have since read summaries of the Conference report including a recent public lecture on the subject by Actuary and former Chairman of PUNCH, Chief Ajibola Ogunshola.

We cannot seriously address a number of the fundamental political problems facing us without looking at the report of the Conference, and perhaps those of previous ones too.

It would be pathetic to discard the Conference report or to assume that making Chapter 2 justiciable alone will solve all our problems.

Justiciability is important; but to put it above everything else is like striving after the wind, and this is why: the chapter depends essentially on government providing a host of social services and infrastructure failing which citizens can go to court to enforce their rights. It’s founded on the nanny state model.

The question is, where would the resources to support the system come from? How will such a system be financed and who will pay for what?

If, for example, Zamfara State decides that education or health is not its priority, why should we have a federal constitution that not only imposes a different set of priorities on Zamfara but also finances it from elsewhere at the risk of litigation?

Falana could argue that a responsible government, even under the present dispensation, can find more than enough money to make the system work, but it is precisely because the current system is not working that we’re where we are.

To talk about justiciability without talking about how the system will be funded or the impact of religion and socio-cultural beliefs and practices and other factors that make spending on social welfare very, very expensive is to stand the matter on one leg. It won’t work.

If Yobe wants to spend hundreds of millions of naira yearly to sponsor pilgrims, for example, or Imo wants to discount ground rent for churches into order to produce enough missionaries for export to Rome, why should we insist that education and health must be their priorities?

I’m not suggesting that the centre is so useless that it should be done away with. But for it to be efficient and serviceable it must carry fewer loads.

It’s, in fact, to the credit of the Conference that under the recommendation for “devolution of powers”, it proposed to remove nine of the 68 items contained in the Exclusive List, leaving only matters considered essential for now.

There are a number of other recommendations by the Conference that are also noteworthy. These include the reduction in the number of Federal ministers to 19, part-time membership of the National Assembly, removal of the immunity clause, and the creation of a constitutional court, an anti-corruption court and state courts of appeal.

Falana should be a proud promoter and defender of these items, especially since he did not file a minority report after the conference.

His concern about the Conference recommendation for the creation of 18 additional states is valid, but surely as a strong advocate of equality how can he justify the existing situation where the North West has seven states, the other four zones six, while the South East has five?

In a federation where dubious numbers determine who gets what, what the current state structure means is that while the North West, for example, has 92 representatives in the Federal House, the South East has only 41.

Compared with the North West, the South East is under-represented by more than a factor of two to one. How can justiciability alone address this gross and fundamental injustice?

By the way, Kaduna State governor, Nasir El-Rufai, also tried to discredit the work of the Conference recently by claiming that representation at the Conference was poor and that there’s a lack of clarity about what “restructuring” really means.

He is wrong. It’s true that his party, the All Progressives Congress, refused to nominate representatives. But the records I have seen showed that the 492 delegates drawn from 24 groups covered a considerably broad spectrum of the Nigerian society that no honest opinion can ignore.

It’s interesting that while Falana and El-Rufai can hardly be described as ideological soul mates, on the contemporary issue of restructuring, they appear bound by a common contrarian thread.

Interestingly, too, El-Rufai, the prince of the North West, which is the biggest beneficiary of the skewed state system, has just been appointed chairman of the APC committee to “articulate the party’s position on restructuring.” Except if this is a ploy to prompt the man to commit political suicide, the matter is dead on arrival.

Can we still save the baby of the Conference report and the call for restructuring and dispense with the bathwater?

So, in a tit-for-tat against the move to recall Dino Melaye, the Senate will probe the Tertiary Education Trust Fund (TETFUND) where INEC Chairman, Mahmood Yakubu, was Executive Secretary before his appointment?

Fair game. It’s clear that the Senate can no longer hide its desperation to save its embattled golden boy. If Yakubu’s commitment so far to raise INEC’s performance level and his doggedness against all odds are glimpses of the man, then the Senate may have found their match. This professor will follow the law wherever it leads, not minding the cost.