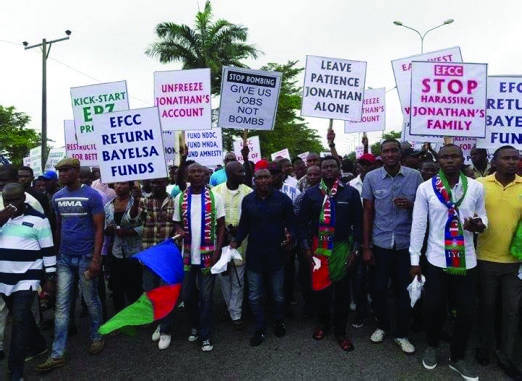 Business executives who neighbour the Economic and Financial Crimes Commission (EFCC) on Awolowo Road, Ikoyi, Lagos got more than they could have bargained for on the first day of a business week.

No sooner had they settled into their chairs for work that day than chants of “EFCC, Leave Patience Jonathan Alone” rent the air.

Indeed, just in front of the EFFC gate were gathered the motley crowd bearing assorted placards pleading the case of former First Lady, Mrs. Patience Jonathan (aka Mama Peace), currently the key suspect in a slew of sleaze cases being investigated by the anti-graft body.

It was against this backdrop that the “supporters” were protesting what they described as the “harassment” of the former First Lady.

Trust our omni-present radar; we witnessed the proceeding live undercover.

What we, however, found strange was the sorts of people assembled to argue Patience’s case that day. Most of them looked unkempt in their tattered clothes and bathroom slippers.

Our discreet investigation  revealed that the guy contracted to arrange the protest simply stopped at neighbouring Obalende motor park and recruited the “Area Boys” to carry the pre-written placards to the EFCC office.

Smart dude, a pre-written press statement was distributed to a couple of reporters invited to cover the event.

At some point, out of curiosity, one of the reporters chose to chat up one of the marchers.
Sensing trouble, the “coordinator” of the protest barked at the journalist “to back off!”

So greedy, this contractor chose to go for cheap hirelings at the motor park instead of more intelligent people who understandably would have asked for higher “appearance fee”.

Later asked by another mischievous reporter why the “protesters” mostly looked like destitutes, the “coordinator” simply retorted: “No comment.” Hmmnn…Using more corruption to defend corruption.

Fallen hero and the Prodigal Son

At the time when nationalism still had meaning, when politicians were still guided by a sense of high values in public office, he stood head and shoulders above his contemporaries.

Orator par excellence, he was reputed for first mooting the idea of freedom on the floor of law-making chamber for his fatherland from the colonial taskmasters from the Queen’s land.

Later in life, this freedom-fighter had a running battle with the goggled tyrant intent on transmuting from Army uniform to agbada until he expired in the laps of some imported Indian hookers while eating the proverbial apple.

So nasty was the ordeal of this hero at the tyrant’s hands that he was left no option than resort to the popular NADECO route to escape to Oyinbo land for dear life.

Many years later, he returned home and died a hero’s death and received a hero’s burial.
But that is not the story today. The disturbing gist is that his heir is proving to be an unworthy heir.

Unlike the dad who lived an austere lifestyle, this  son is a man-about-town. But that should not be a sin. What is sinful is that he has proceeded to auction the family silvers to fund his lavish lifestyle including substance abuse.

We gather that a substantial section of his father’s country home in the land where the British interlopers famously met their Waterloo in the twilight of the nineteen century has been sold to a developer who has now built a pub house, and that to access what is left of the old dwelling of his dad, you now use a footpath.

Also, all the parcels of land owned by the dad in the GRA of the state capital have been disposed by the Prodigal son and the proceeds used to enjoy himself.
What a tragedy!

Reprieve for the Agbero King

Remember the Agbero monarch? The one who went about slapping a daughter of Eve in his domain until he himself got slapped with a sack from the stool, that is.

Of course, we have been monitoring the riveting saga unfolding in the state with the heartbeat. The last time, we promised to update you as events unfold.

The new gist is that following his expulsion from the palace and withdrawal of his monthly financial entitlements and other conduits for servicing the “stomach infrastructure”, the Agbero monarch has really fallen on hard times.

So severe that he spent the whole of last Yuletide season at the home of the new political strongman of the state (who caused his being booted out of the palace in the first place), begging for mercy.

Moved to pity, the new political strongman, we gathered, decided to intercede on his behalf to the new no-nonsense Gomina of the state who, in reflecting the spirit of goodwill season, ordered a lifeline be extended to him in the interim. This is in form of return of his monthly financial entitlements even though his deposition remains.

The story is surely not ended yet. We shall keep you updated.

When words hit the airwaves recently that the helmsman at the ministry pertaining to jollification and travel in the acclaimed centre of excellence had been sacked, no official reason was given, other than the usual perfunctory expression of gratitude for the services rendered to the public.

In line with our tradition of in-depth investigation, we can now confirm that the sack was precipitated by our friend’s penchant for “egunje”. The last straw that broke the camel’s back, we gathered, was his unilateral decision to negotiate and enter into a mouth-watering deal on behalf of the state with an international investor without clearance or knowledge of OgaPatapata.

Once the intelligence reached the hardworking but quiet gomina, he lost his cool and decided to give our friend the boot.

With the waves of recession seeming unrelenting for the second year, many state governments have had to not only cut down on wasteful lifestyles but also put on their thinking cap to stay afloat.

From the North-West state of Kebbi came a rather comical report recently. While announcing its survival strategy, the state government said it decided to buy “Tokunbo” (imported fairly used) vehicles as official cars for commissioners and assemblymen.

According to the Secretary to the State Government, Babale Umar Yauri, each of the vehicles cost N7m. The AtikuBagudu administration was determined to avoid excessive spending,  he said, hence the decision.
This would no doubt be applauded as populist in many quarters.

But Yauri’spontification would have received greater applause if he had added that the governor had chosen to lead by example. For what is considered the real drain-pipe is the heavy maintenance cost of the governor’s office.

Has the governor also resolved to do away with not only “tear-rubber” state-of-the-art limousines but needlessly long official convoy as well? What has happened to chartering of private jets for meaningless local junketing? In the spirit of the hard times, has the governor resolved to adjust his itinerary to take scheduled local commercial flights?

Really, these are some of the real drain-pipes on the state treasury.

For a government trumpeting cost-costing, how defensible is the other claim by Yauri that a whopping N500m had been spent on curtailing “cattle rustling” in the state? If N500m was spent on fighting stealing of cows in less than two years, how much would the cattle market be worth then? We probably would be talking of tens of billions of naira.

When the Air Force invited the media to the public demonstration of some equipment recently acquired to enhance its aerial capabilities in Abuja, not a few of the critical observers left the venue that day with mixed feelings.

While many were at least charitable enough to credit the Buhari administration for insisting on value for money and a commitment to retool the service, what they found rather hard to swallow was the fact that officials were seen using the regular cellphones as the intra-service means of communications right there while demonstrating the new assets.

Whatever happened to the close-circuit radio?

Of course, funds meant for those in the past were stolen by the service chiefs and commanders to build multi-billion mansions with master bedroom the size of soccer pitch, equipped with all the infrastructure for “pole-dancing”.