Last week, I did challenge the claim of Justice Saleh to the effect that he was the one who annulled June 12 Election and not the erstwhile military president, General Ibrahim Babangida.

Contrary to his lordship’s misleading claim General Babangida addressed the nation to justify the annulment. Furthermore, he promulgated the Transition Political Programme Amendment Decree no 40 of 1993 which effectively annulled the election by deleting all political programmes set out in the 2nd and 3rd quarters of 1993. The Presidential election and the declaration of results were thereby annulled and deleted from the political transition  programme.

Shortly thereafter, the dictator enacted the Political Transition Decree No 41 of 1993 which rendered null and void all court orders which had been granted in respect of the election including Justice Saleh’s order which had restrained the NEC from further announcing the results. The Decree however ousted the jurisdiction of all courts and particularly the Court of Appeal from hearing and determining the legal validity of  the annulment of the election. Thus, the hearing of the appeal arising from Justice Saleh’s order which was then in progress was terminated.

In the light of the foregoing it is undoubtedly clear that Justice Saleh did not annul the result of the June 12 election. He only granted an order of interlocutory injunction restraining the NEC from further announcement of the results.  With the promulgation of Decree 41 of 1993 Justice Saleh’s jurisdiction to proceed with the hearing of the substantive case  was ousted. So he was unable to make any final order on the result of the election.

Therefore, it is grossly misleading on the part of the retired judge to set out to exonerate General Babangida from the illegal annulment of the June 12 election. More so that General Babangida has repeatedly maintained that he annulled the result of the election “in the national interest.” 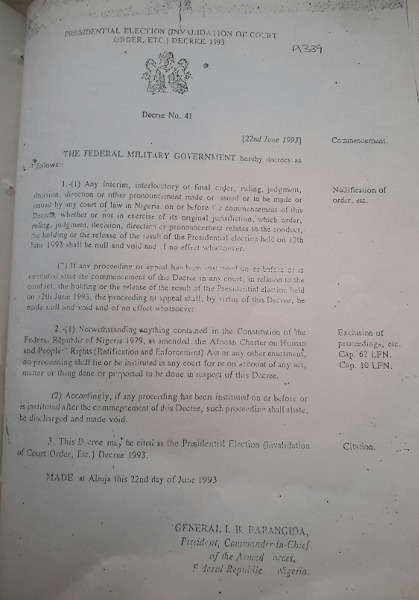 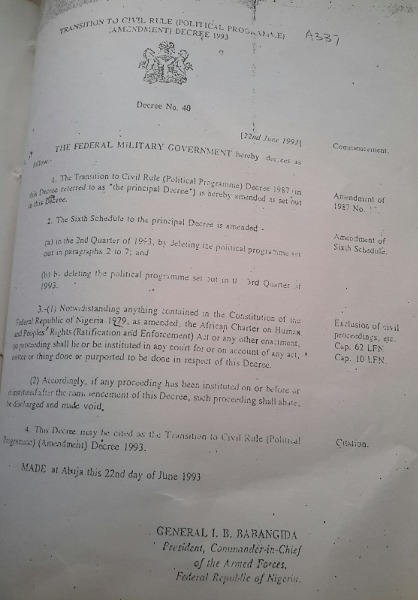