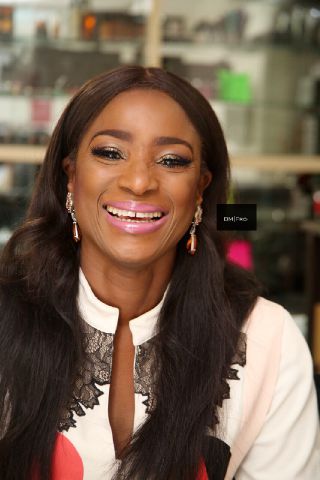 Many Nigerians know Mrs. Yemisi Wada as the former wife of controversial politician, Chief Femi Olukayode (formerly Fani-Kayode). However, with her recent launch of LASGIDI Cops, a crime series production, she looks set to prove she is more than a controversy magnet – and just another pretty face.

Would you consider yourself an entrepreneur?

Yes, I would. An entrepreneur is someone who sets up a business and in that case, I would say I have been an entrepreneur for many years; from the time I was in Law School. I realized then that a lot of women wore linen skirts; I would buy linen skirts from my aunt, Mrs. Sofola, and resell them to students and some lecturers.

You are not readily associated with movies and suddenly you are out with LASGIDI Cops. Where did that come from?

I run a non-governmental organisation called Haven for the Nigerian Child Foundation. About 2007/08, while trying to raise funds and awareness for our primary mandate, which is finding succour for children living on the streets, we decided to do a movie called, “Oluranlowo Mi” which means “my benefactor”. The essence of that movie was to bring to the fore the plight of children who find themselves on the streets; how they got on the streets, what led them to it and what life is like on the streets. From there, the movie-bug sort of stuck.

I am an advocate at heart and I feel this is a means of advocacy: letting people see themselves and others around them and improving the world around them. I read a lot of books and watch television a lot. There is a lot of me that I want to get out, especially with LASGIDI COPS. I once went to a police station abroad and saw how they go about solving crimes. This, including the many other crime-based TV series I have watched over the years, brought the thought that it would be interesting for me to do something similar here for people, and to see what making an extra effort could be like.

Do you consider LASGIDI COPS a one-time adventure or have you decided to make a sustained foray into such productions?

At the beginning, it was just supposed to be several seasons of LASGIDI COPS but my producer, Ola, have started toying with the idea of doing a lengthy movie. Having seen the kind of joy I derive from producing, looking around, if I could find investors I would like to go into other areas or do other things like LASGIDI COPS which I love to advocate about. For now, LASGIDI COPS is sponsored solely by myself.

What do you hope to achieve with LASGIDI COPS?

I want people to see that it is possible for Nigerians to ask for better. I want to believe that it is not the average series you watch on television. By watching the movie, you can see there is the extra detail to attention, to the storyline and how people speak to the script. I want to set a bar where people can understand that this can be done here and people will demand more of such high standards. I want the police, the government, and people in society to realize that more can be put into these efforts aimed at solving crime. Things don’t have to happen in such a way that the thought of making reports at the police station would seem burdensome to people to the extent they would prefer to take the laws into their hands or believe that is the best option. In this way, the movie is an effort to promote many things at the same time.

Do you see a future in the series in a country like Nigeria?

Certainly. In fact, I see it pushing other people to want to do the same thing or beat it. LASGIDI COPS is patterned after the Crime Scene Investigation (CSI) New York series, which is popular on American television. Basically, I want other producers to see it and come up with their own aspects of doing things we would not have thought of doing here in Nigeria; that it is possible and to go into those ventures as well.

Looking at the heavyweights featured in the Series, it is obvious the production didn’t come cheap. How much did this cost to make?

Let’s say that it was a lot of money, especially for the TV Series business. This is my first foray into the TV Series business; it was my first time. It was the first big project for my producer, Ola, who had just returned from the United Kingdom. Even though our projections at the beginning were not as high as we expected, we ended up spending a lot more than initially budgeted and we are still spending much more than we had envisaged. I hope that by the second season, with what we have learnt, we can cut costs without sacrificing quality.

As a woman engaged in such a project at this time, do you see any disadvantages or do you see opportunities?

I see both. I see the obvious opportunities of other women thinking, well, Yemisi Wada did this, why can’t I? And not just in Nigeria, to be honest. All around, you’ve always heard of male executive producers. Now you are getting people like Shonda Rhymes, you know women too are doing these things. Like now, whenever I am asked to mentor younger people, it is one more thing I can come up with and say I can mentor on production. I see the opportunities in this light. What I see as the disadvantages are the same things that face Nigerian women when they try to raise funds; going to people to ask for money. I don’t believe I am taken as seriously as I would have been if I were a man. This has been the greatest disadvantage so far.

What would you consider the greatest challenges of women who would want to do projects such as these?

Raising funds would be the greatest I feel they would have to go through. However, I am the executive producer on this project and I am a woman. The producer and director, Ola, is a young lady. So it is not all about disadvantages and challenges; there are good things as well, including the opportunities I referenced earlier. Again, it is a new area for women to go into. But I’ll say the opportunities out-weigh the disadvantages. That is what I would tell other young women.

What exactly have you been doing before now?

I am a lawyer; a partner in my law firm, Summit Law Chambers. I am also the Managing Director of a facilities management company called Beck Harding Consult Ltd.; and then now, I am a Consulting Director for Zynergy, West Africa.

Can you clear the air on your relationship with Wole Ojo?

He is my son, like all the other young actors in the Series, who all call me “mummy”. Even Keppy Ekpeyong calls me “Ma’am”. You know some people can’t understand that, and I will not dignify them with a response.

You seem unruffled by unsavory stories about you in the media. Is your skin that thick or shall we say yours is a classical case of wearing a brave face?

What are your plans for the next five years?

What kind of books do you read?

I love books that offer pure escapism. I do not read autobiographies nor real life stories. I read a lot of fiction and drama, especially crime dramas.

I am a happy person. I laugh a lot and I believe in making people laugh. I do not hold grudges and I am a contented person. I love myself; I got to a stage in life where I fell in love with myself. I like who I am and I do not want to be anybody else, so I am content. I am happy and grateful for what God has given me. I guess I am lucky in that sense and that is my testimony. I believe if you are happy inside, it shows outside. I am genuinely happy for other people and I am the greatest critic of myself and I have the Holy Spirit in me.