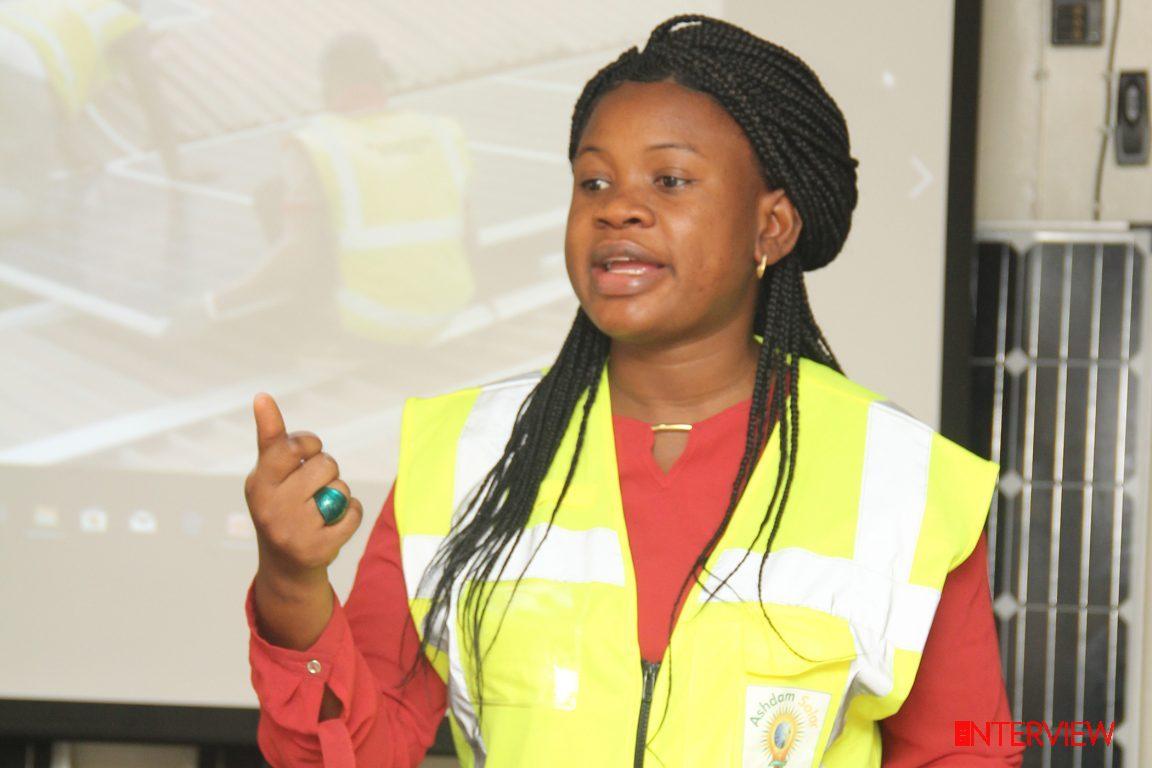 The co-founder of Ashdam Solar Company Ltd, Damilola Asaleye, is currently doing her PhD in Energy Engineering. She tells The Interview of what it means to be a woman in the renewable energy sector:

Your organisation launched the solar powered snacks cart in February. What inspired that idea?

The solar-powered snacks cart is launched through collaboration of two companies in two industries:
Ashdam Solar in renewable energy industry, and Maipassion Cakes and Events in food industry.

The unavailability of clean energy access, affordable electricity, quality of food on the street and healthy snacks for regular commuters and common men on the street inspired the two companies to take the bull by the horns and create employment opportunities, energy security, food security, improved livelihood for common men and inclusive economic growth for all.

How many of such carts have you been able to dispense?

One of the carts has been dispensed and two are currently in fabrication.

What has the response been so far?

The response has been very encouraging. People on the street are really marveled at how electricity can be produced easily without the noise, air pollution and extra expenses that comes with fossil fuel generator.

The mobile solar powered snacks cart has created a mobile awareness for solar energy as an alternate to the regular generator.

The cart has been a phone charging hub for commuters at park where the cart is stationed, an energy access point for mobile electronics sales persons such as testing of fans, phone chargers and mini electronics.

The solar panel attached added to the aesthetics of the cart, which has improved the sales of the snacks in the cart.

A woman has the ability to stretch her limits; we have the natural ability to multi-task and manage difficult circumstances optimally

The renewable energy sector, including solar, is said to be quite capital intensive. How have you been able to get around that?

Many of the projects my company has done are financed by personal funds and with help of family and friends that believe in my company and our dreams of having a cleaner, safer and affordable alternate energy in Nigeria.

Have the banks been of any help?

Recently, very few banks have seen that renewable energy is the future and a major solution to Nigeria’s energy problem and global environmental crisis such as climate change, and these few banks are now willing to finance project developers in the RE space. We are in talks with some banks and we are highly optimistic of the results we are going to achieve together.

Being a relatively new sector in Nigeria, there seems to be the problem of limited knowledge. How have you been able to deal with the knowledge gap?

My company has been able to deal with the knowledge gap by being the solution to the identified problem. As an individual, I have sought both national and international technical knowledge on renewable energy and have taken it upon myself to share my knowledge with people who want to work in the renewable energy industry.

My company has seasoned experts that have advanced certificates, diplomas, and up to third degrees in renewable energy.

We also learn on daily basis about the international standards in the industry. With the Internet you can learn as much as you want, and the knowledge gap is no longer a problem.

Today is International Women’s Day with the theme: “Think equal, build smart, innovate for change.” How does this resonate with you?

The theme encourages me to continue to strive and become better in a male dominated industry, to continue to support, train, be a role model and mentor for other women until we have the much-needed gender value in the renewable energy industry.

The theme also encourages me to think of smart ways of achieving my vision and to become a better change maker that will not be identified because of my gender but because of my achievements.

What does gender balance mean to you and how do you see it as it relates to national development?

Gender balance to me means having women take their share in the development of all sectors, giving women opportunities to have their voices heard, there intellects utilized and their role in national developments acknowledged.

Have you ever seen yourself as disadvantaged on the basis of your gender?

I have never seen myself as disadvantaged because of my gender. I believe in embracing challenges and providing solutions to challenges.

Being a woman might be challenging in some cases example is during pregnancy, but this period is short and for a while.

A woman has the ability to stretch her limits; we have the natural ability to multi-task and manage difficult circumstances optimally.

As a woman, we have to believe in ourselves, know we can do whatever we set our mind to achieve, know that our gender is not a disadvantage but an advantage. And with our goals set right we can be balanced for better.