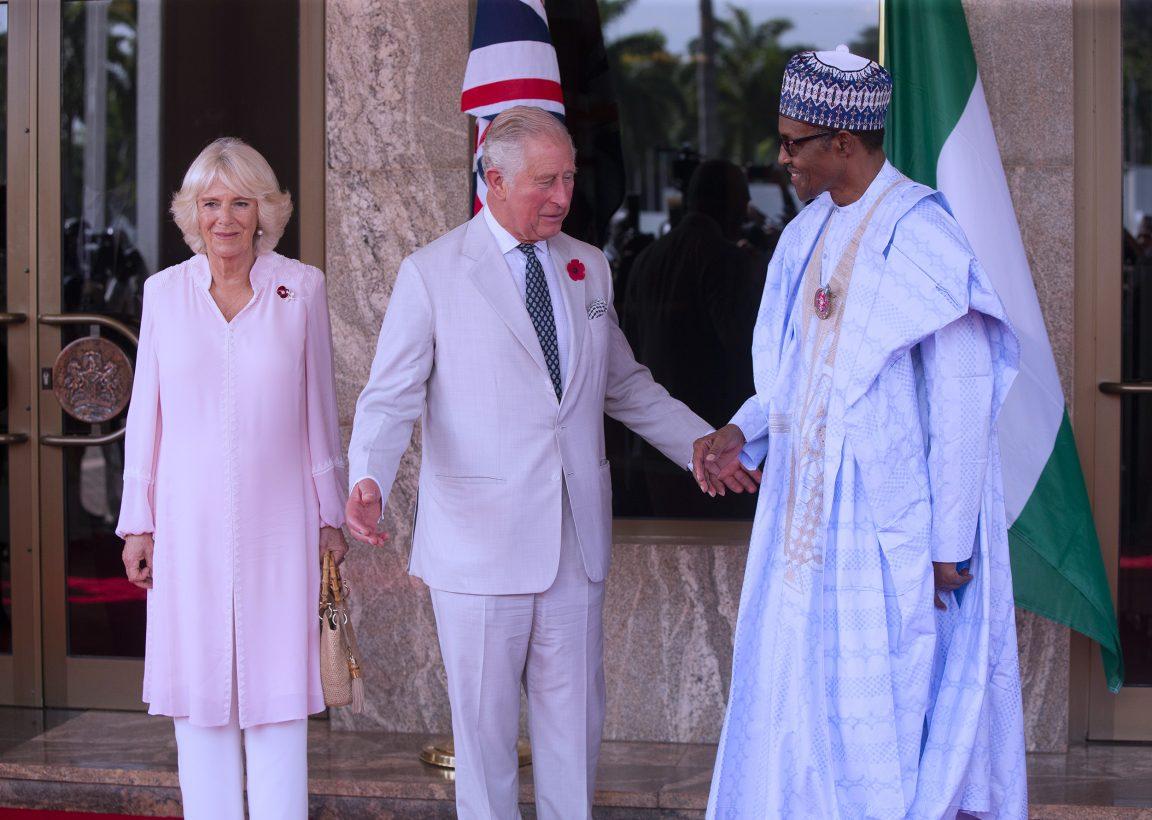 The narrow-minded would probably view the futility of the entire visit only by a fleeting wardrobe malfunction. In the amusing picture that had trended in the social media, visiting Prince Charles of Wales buttoned his suit wrongly.

Flanked by wife Camila and a Nigerian general in full ceremonial attire in the blazing sun, his sunglasses would have accentuated his grey-colored ensemble, but for the misaligned button.
Then, the cynical caption that could only be written by a PDP sympathiser: “Just two days that Prince Charles spent in Nigeria his life has been turned upside down. Just look at the way he buttoned his suit. Nobody visit(s)… APC-led government and still remain (sic) in his senses.”
Of course, that is the most subjective – if not utterly unreasonable – thing to say.
Another joke was made of the fact that at yet another occasion, Prince Charles had to depend on additional illumination provided by rechargeable lamp to read his speech because the room was poorly lit. But the comic reliefs of sartorial indiscretion and poor lighting aside, a few salient issues were undoubtedly thrown up by the royal visitation of last week.
Regardless of the official garnish, a frank audit of the prince’s itinerary would only suggest a vanity trip for a man on the eve of his 70th birthday, at huge social-cultural costs to the nation. His earlier tour of the west coast included The Gambia and Ghana.
A visit to Plateau had to be cancelled at the last-minute at the instance of the Nigerian authorities over security concerns. The visitor was expected to discuss “peace-building and conflict resolution” there.
With the seemingly unending ethno-religious eruptions in Jos, that proposal would appear perfectly in order.
But those who still remember how the same Prince Charles had used his pen to stoke anti-Semitic tension in the Middle East in 1986 could only have anticipated the Jos town hall meeting with baited breath. In the tactless letter, he had blamed the influx of “foreign, European Jews” for escalating the Arab-Israel conflict.

As if that was not explosive enough, his next sentence would set Britain and the United States on diplomatic edge. He pointedly asked whether then US President Ronald Reagan would summon the courage to push back “the Jewish lobby” to stop terrorism in the perennially beleaguered region.

“Regardless of the official garnish, a frank audit of the prince’s itinerary would only suggest a vanity trip for a man on the eve of his 70th birthday, at huge social-cultural costs to the nation. His earlier tour of the west coast included The Gambia and Ghana.”

In the unlikely event that Prince Charles would have agreed to submit his speech for security preview by the Nigerian establishment, the invocation of “security concern” may indeed have helped stave off possible landmines of a misspeak capable of raising the blood pressure in some quarters in Abuja, especially as we enter the election season.

Two, the decision by Abuja to dragoon all the leading royal fathers across the country to meet Prince Charles in Abuja is most condescending. It was as if we were back to the colonial era when traditional rulers had to appear before the district officer.
If Prince Charles had expressed desire to meet with our kings, couldn’t he have been encouraged to visit them in their respective palaces like he did in Ghana to the Asantihene of Kumasi?
Well, perhaps the only consolation we can draw now is that Oba Ewuare II of Bini Kingdom did not allow the moment slip without reminding Prince Charles of the need to return the artifacts agents of his forebears looted from the acclaimed “cradle of black civilization” in 1897.
In his own assessment, Governor Nyesom Wike of Rivers State saw the marginalisation of the South-South.
While hosting a Pentecostal preacher in Port Harcourt, he argued that the heir to the British throne should not have stopped at the showcases in Abuja and Lagos, but also visited the Niger Delta which though produces the bulk of the nation’s wealth, its people are left to live in desperate condition.

“the decision by Abuja to dragoon all the leading royal fathers across the country to meet Prince Charles in Abuja is most condescending. It was as if we were back to the colonial era when traditional rulers had to appear before the district officer.”

Indeed, only those who endure acid rain or inhale air poisoned by gas flare are in the best position to tell the story of pain in intimate details.

Mindful of the facts of history – whether recent or ancient, the observation by activist Wike would seem even too charitable.
On the contrary, the institution Prince Charles represents certainly still has a lot of explanation to make to the swamp-dwellers of the Niger Delta. The debt owed by Britain is both moral and cultural.

Coming in the very week that the twenty-third anniversary of the murder of Ken Saro-Wiwa was being marked, it would have indeed been interesting to hear what answer the heir to the British throne would, for instance, offer to the Ogoni procession in Bori or Port Harcourt on the old question of British complicity – both by commission and omission.

Until the Ogoni crisis exploded into a national conflagration in the 90s, British-owned Shell had undoubtedly become synonymous with neo-colonial exploitation of the oil communities, inflicting unspeakable atrocities, devoting vast sums to setting clan against clan in a rendition of text-book strategy of divide-and-rule.

Then, Shell had no qualms colluding with a military without patriotic education to “pacify” the restive. It provided logistics and cash incentives to the Okuntimo-led internal security squad that became the byword for terror against defenceless activists like writer Saro-Wiwa agitating for fairer deal for the people.

When nine Ogoni activists were sentenced to death in 1995 through a trial adjudged a sham at best, it took not the righteous indignation of the institution Prince Charles represents, but the lobby championed by a few men of conscience including immortal Nelson Mandela (then South African President) to stampede the Commonwealth into expelling Nigeria then under the despotic jackboots of Sani Abacha from the body uniting Britain with her former colonies.

Twenty-three years on, very little has been done to clear the environmental rubble Shell left behind, even as the culture of exploitation remains.

“Had Prince Charles summoned the political courage to visit Bini kingdom last week, he would certainly have been received by perhaps the third and fourth generations from the Ovonramwen  lineage still exuding royal aplomb and a people whose cultural fraternity remains unbroken, even 120 years later.”

It took Saro-Wiwa’s memorial last week for the world to be reminded that the promise of clean-up by the Nigerian state has not been fulfilled, even as efforts are being intensified in official quarters to fast-track Shell’s return to Ogoniland to resume “business as usual”.

Of all the existential needs of Ogoniland, the Nigerian authorities would, for instance, recently consider the award of the contract for the building a cemetery the most urgent in what clearly showcases nothing but contempt for the humanity inhabiting that space!

It would have been interesting to hear Prince Charles’ response on Rivers soil to such difficult questions and grotesque suggestions.

Elsewhere in Edo, the British royal would perhaps not have had a respite either. In Benin City, he would not have missed the imposing statue at the beginning of the Sokponba road by the iconic Ovonramwen Square. It is an enduring monument to courage under fire and loyalty in the face temptation.

Surrounding it is a tract from Bini’s rich history. It is where in 1897 the advancing British forces, with all their thunderous artillery fire, reportedly met the last wall of native resistance.

It was indeed a willful violation of this deeply spiritual season in Bini’s cultural calendar by the British in the twilights of the 19th century that had set off the chain of events that culminated in the “punitive expedition” by imperial Britain.

The spiritual seclusion forbids the Oba from hosting visitors; much less entertain mercantilist talks the British were agitated about.

The murder of the British emissaries by the enforcers of the referenced cultural “curfew” would then provide a perfect alibi for the imperialists to apply clearly disproportionate military force with the sole carnal objective of rooting out the impediment the Oba was thought to be constituting to their economic interest through the imposition of customs duties on goods leaving his territory.

When eventually outgunned and subdued on that historic day of 1897, the Bini general leading the local platoon was asked by the invaders at that location (a stone’s throw from the great Palace) to renounce the Oba and proclaim allegiance to Britain or face death.

“Still fresh in the memory, for instance, is the dust raised in 2016 over the “Okukor” bronze cockerel at the Cambridge University.Following an advocacy mounted by a group of conscientious students that it be returned to its origin in Benin, the university authorities had to quickly remove the statuette from the dining hall.”

Without hesitating, the captive defiantly exclaimed “Sokponba” (No one but the Bini King).

Of course, he thereafter paid the supreme price, but with head unbowed till the last breath.

The spectacle was no different when the great Oba Ovonramwen was later encircled. He bore the indignity of dethronement without losing honour and subsequently endured the humiliation of exile in distant Calabar with uncommon equanimity.

In the process came not just the wholesale arson by a 1,200-strong wrecking army against anything standing in the kingdom whose sheer magnificence had indeed captured the imagination of Portuguese explorers more than 400 years earlier; but also mindless looting of artifacts for which it had become renowned relative to other notable civilizations.

Of course, on return to London, the conquering generals declared some of the cultural loot from Benin to the British government. Some of them are presently put on display without shame in British museum, while others have been traded off in the United States and Germany.

Still fresh in the memory, for instance, is the dust raised in 2016 over the “Okukor” bronze cockerel at the Cambridge University.

Following an advocacy mounted by a group of conscientious students that it be returned to its origin in Benin, the university authorities had to quickly remove the statuette from the dining hall.

The same way China has continued to pester Britain to repatriate estimated 23,000 artifacts looted from the country during its occupation, even as the British Museum has had to deal with the shame of being constantly reminded by Greece to return its Elgin Marbles auctioned to the British during the Ottoman Empire.

So, had Prince Charles summoned the political courage to visit Bini kingdom last week, he would certainly have been received by perhaps the third and fourth generations from the Ovonramwen  lineage still exuding royal aplomb and a people whose cultural fraternity remains unbroken, even 120 years later.

He would also have heard in Benin the court of palace chiefs resplendent in white garments amplifying, perhaps more militantly, the message earlier delivered by Oba Ewuare II: please return the artifacts stolen in 1897.