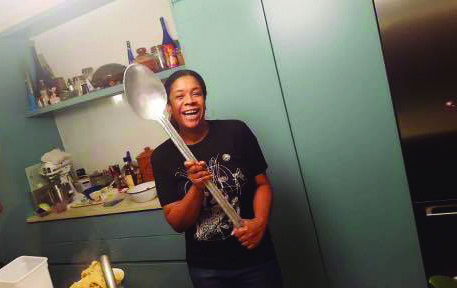 It is funny how things turn out. When I was asked to write an article on new cooking techniques, I had just come back from a Food Smoking Course. Well, when I started the research for this article, I was tickled pink to find that I was “on trend” for 2017 with my choice of course (Yes I know the year has nearly ended, but as my people say: ‘Your morning starts when you wake up’).

It was a thoroughly enjoyable course and I had since invested in a smoker. So far, I have smoked chicken, pork spare ribs, fish and Jollof. However, there is very little one cannot smoke. On the course, we smoked cheese, boiled eggs, cashew nuts and almonds in addition to various meats and fish. One of the things I found most interesting was the conversation amongst the other participants whenever we had a break. There is a whole grilling and food smoking sub-culture going on in the world which I was unaware of.

Dirty Cooking or Grilling (also known as Clinching) is apparently very trendy at the moment. Rather than using a barbeque, the food is placed on hot charcoal to grill, resulting in food with an incredibly intense smoky flavour. The most important thing is to make sure that you use additive-free charcoal and no lighter fluid. You also need to make sure that you use thick cuts of steaks, lamb or pork and tough vegetables such as cabbage, potatoes and carrots. Don’t be afraid of the food burning; as it is right against the charcoal, there won’t be enough oxygen to create a fire.

Although Sous Vide (French for “cooking under vacuum” and pronounced sue-veed) has been popular with restaurant chefs since the ‘90s, it has only just become available to home cooks as the prices of the Sous Vide machines have dropped from over $1,000 to under $200.

Basically, food is vacuum-sealed in a plastic pouch and placed in a water bath heated at a low temperature (55 to 60°C) for several hours (anything from one up to 48 hours). This results in moist, evenly cooked meat and vegetables. Using this technique also ensures that the food is not over-cooked on the outside. The food can then be finished off by quickly searing in a frying pan to give a more attractive appearance.

Some home machines also offer wireless connections to smart phones which allow the user to remotely check and control the machine.

This leads me on nicely to another growing trend: Technology in The Kitchen.  From blenders to coffee machines and even yam pounders, technology has featured in kitchens for decades. However, with the advent of wireless technology, there are quite a few innovative appliances in the market that can help improve the skills of a novice cook.

One which appeals to my inner tech nerd is the Pantelligent – a frying pan with an inbuilt sensor that connects wirelessly to a smart phone app. The app monitors the temperature of the food and tells the cook when to turn the food over, when to stir or add additional ingredients. It even tells you when to adjust heat and when the food is ready. And for the really busy (or should I say lazy) cook, you can buy additional accessories that will automatically adjust the heat for you!

3D printers have also made it into the kitchen with the PancakeBot, a food printer. Choose a design and pour the pancake batter into its bottle. A few minutes later, out pops a perfectly made pancake in the shape of your child’s favourite animal or cartoon character.  Perhaps, one for those with too much money.

Fascinating though these are, I do think they take the fun and skill out of cooking. Nevertheless, I thoroughly approve of kitchen gadgets that save time and effort, or even those that allow you to use food in a new way such as the Spiraliser. Use a spiraliser to turn vegetables such as carrots and courgettes into ribbons or ‘spaghetti’, which can then be eaten raw or lightly cooked. This has given rise to a great new word, “corgetti,” favoured by many on a carb-light diet as a substitute for spaghetti.

Although not especially new, Reinterpreting Ingredients in this and other ways continue to grow in popularity amongst home and restaurant chefs worldwide. Another growing trend is the use of Food Hydrators to dry out meat, fish, vegetables and fruit.  Recently, there was a craze for Kale crisps which has grown to include vegetables such as broccoli and parsnip. Just a week or so ago, a friend sent me a link to a Nigerian company which produces Ugu Crisps! It seems that anything can be turned into a crisp. I have also seen salmon skin and chicken skin crisps.

I could write and talk about this topic forever, but alas, I have a word limit. Suffice to say there are so many clever cooks out there using their imagination (with and without technology) to create exciting new techniques and food. The culinary world has never been so exciting!