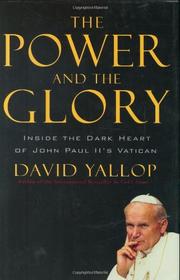 A book with the title of this article published 33 years ago by British investigative journalist, David Yallop, made the Catholic Church very, very uncomfortable.

Yallop said in the book that Pope John Paul I, who lasted only 33 days as pope, did not die a natural death.

He said the Pope, who was not the preferred choice, was murdered by vested interests in the Vatican because he was poised to rid the Church of its hypocrisy, hubris and corruption, a claim that the Church denounced as trash.

Trash or not, the Church in Rome and elsewhere has had to examine itself in light of many existential threats, after centuries of complicity in and ambivalence over some of the worst atrocities in the world. And believe it or not, money is at the root of it.

In response to increasing financial pressures, the Church is bending to new social trends and becoming quite creative at expanding its membership base.

The point in Yallop’s book is that beyond the façade of piety, religion is a deadly game of power, influence and survival of the fittest.

And it’s all in God’s name.

As the country mourns the outrageous killings at St. Philip’s Catholic Church Ozubulu last Sunday, the public is left to contemplate the tragic irony that Aloysius Ikegwuonu the obvious target, might also have been killed in the Church he donated to the community in God’s name.

His father and 12 or 18 other worshipers, depending on whose account you believe, were not so lucky. They were killed at morning Mass, innocent victims of what appears to be a gang war over money or God-knows-what between Aloysius and some “unknown” persons abroad.

It seems inappropriate to get past the dead, the wounded and the grieving to talk about how this tragedy came to happen in the first place. But who knows how many lives may be saved in future by shining the light on the church, the scene of the crime?

Aloysius was not a stranger to the place. The fellow, who had already been made a “high chief” at 36, is obviously one of the princes of a contemporary Igbo obsession, “osina nwata buru ogaranya,” literally meaning “one who became wealthy from childhood.”

Aloysius, famously celebrated as “Ebubechukwu Ozubulu” (God’s glory in Ozubulu), also built two other churches, in God’s name, to mark his piety. His charity is a validation of his status and he has also been nicknamed “bishop”, to show for it. He has made it, as we say.

Several accounts after the incident indicate that the clergy and laymen in Ozubulu knew Aloysius quite well. You cannot be “God’s glory” shining through hefty donations and dodgy philanthropy and not be known.

Beyond accepting the keys of the new church building and blessing Aloysius and his crowd at a special Sunday thanksgiving, did the parish priest or anyone in the Diocese bother to find out exactly what he does for a living?

Or was it just enough that he had performed charity in the name of God?

One of his spokespersons said he is an “international businessman” based in South Africa, with thriving businesses in real estate and also an importer and exporter of spare parts.

The spokesperson did not name any of Aloysius’s companies or subsidiaries or the city in South Africa where this international businessman lives. And just like the parishioners, none of the journalists at the press conference asked him. Not one.

But Anambra State Governor, Willie Obiano, appears to know Aloysius a bit. It was the governor who shared the narrative about drugs, dodgy businesses and imported gang warfare.

Interestingly, just like the parishioners Obiano said nothing about Aloysius when the same fellow lined Awka with life-size billboards of the governor and himself announcing the official commissioning of roads he built to mark his 36th birthday in May.

Did the governor know then what he knows now?

The logic appeared to be that helping God and helping Obiano’s politics could go hand in hand. Now, the scale has fallen from the governor’s eyes and I wonder if after what he said publicly about Aloysius he is thinking he should have acted differently at least three months ago.

It happens all the time, talebearers conning people and doing havoc in God’s name. Chukwudi Onuwamadike, otherwise called Evans the kidnap kingpin, is another recent example.

He was a nice guy, minding his business, making hefty donations in church and paying his tithes, before he was found out. It was not the church or his neighbours that found him out; it was his greed.

I’m not suggesting for one moment that the church should take over the job of the police. But if the clergy loses its seasoning as a moral agent and becomes just another trading post, then it would be liable to the laws and vagaries of trading posts, including levies, taxes and tighter regulation.

Ozubulu happened because criminals in business and politics no longer see a distinction between a place of worship and any other place. They are, in fact, under the notion that places of worship are compromised and have therefore become either extensions of their domains or legitimate targets of their senseless retribution.

I’ve been watching politicians dramatise their regret over Ozubulu and swear that the culprits would be brought to justice. They do this all the time, knowing full well that it means nothing. But since Obiano, in whose backyard this crime was committed has said it would be different this time, let us wait and see.

One thing is clear: No serious investigation of this crime would be complete without following the money trail through its dodgy errands of charity in the community, church and wherever else the trail may lead.

Ozubulu could not have been in God’s name.