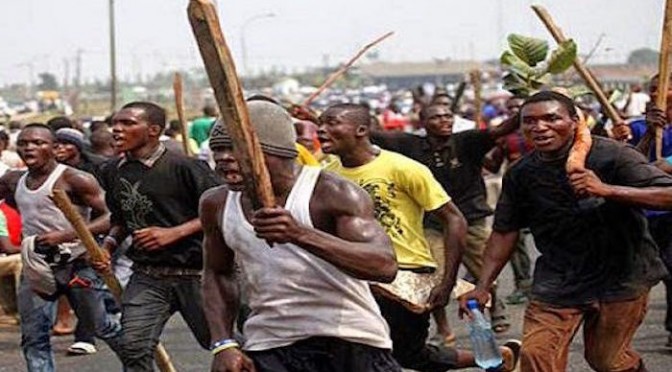 Prison, they say, is a great leveler. Well, that may be only one part of the story. Gaol would also seem a place where human hard nuts are cracked. At least, this is the only deduction we could make of the experience of a former toughie, who literally held the acclaimed heart-beat of the nation by the scruff of the neck until the last Yuletide season.

Not too long ago, we brought you gist about his exploits until a new Pharaoh mounted the throne who did not recognize Joseph. In the last order, our friend had made good fortune by being the ruling party’s chief rough neck, so much that he wielded enormous political influence.  He managed to corner the strategic office of the “youth leader” of the party.

Intoxicated by his new-found wealth, he began to equate himself to the new gomina of the province who is turning out to be a no-nonsense person. The last straw that broke the camel’s back was his open defiance of the gomina’s order on how rice and other forms of “stomach infrastructure” were to be shared to party members during the Xmas celebration.

Not only did he allegedly threaten to “waste” the gomina’s right-hand man in charge of the provision “the same way your father was killed”, he publicly heckled the new Oga patapata of the province and got his hangers-on to barricade the gomina’s way.

It was at this point that the powers-that-be decided to teach him the lesson of his life. Not only did the security agents pick him, he was soon charged with a grave offense: threat to life.

Having spent a couple of nights in the mosquito-infested detention house, our friend became sober. Frantic attempts he made to reach out the former gomina – now the political leader of the province – were rebuffed as the latter was said to have insisted that he would never condone impunity or disobedience of constituted authority.

The message finally got to him when the magistrate who entertained his case adjourned the matter and ordered that he be kept away in prison. So, it turned out that the once powerful “youth leader” had to spend Xmas and New Year in prison.

By the time he was re-arraigned in court at the resumed hearing, the once boisterous street toughie had become a shadow of himself, with his luxuriant beer belly almost flattened on account of what obviously has been a forced abstinence.

Luckily, the magistrate granted him bail that day.

That is no more news, you might say. The new gist is that not only has our friend been forced to eat the humble pie, we reliably gathered that he has since been going cap-in-hand to influential figures in town to intercede on his behalf so that the weighty charge could be dropped.

One of them, we reliably gathered, is chief legal officer of the province to whom he practically did a “do bale” (Yoruba for prostrate).