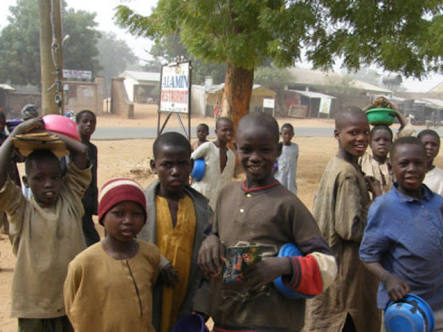 The number of almajiri children on the streets in the towns and cities of Northern Nigeria is humongous. It is said there may be as many as three million in Kano State alone.

The Governor of Kano State, Abdullahi Ganduje, has just come out with a statement that is intended to show how well he is tackling the problem. The almaijiri are not just from Kano, he avers. They have come across porous borders from Chad, from Niger. And – oh, the government has just added some ‘core’ subjects to the curriculum of the schools built for them: They now study Mathematics, in addition to, of course, religious instruction.

Almajiri are not just an innocuous presence on the street, in the motor-park, not just an aesthetic displeasure for the sights of well-heeled fellow citizens sitting in their cars, who they accost with their grimy fingers and dirty bowls, begging for money.

Their significance is not just about the poverty they epitomize.

Extreme poverty in youth in Nigeria has worn other faces before. After Chief Obafemi Awolowo introduced free education in the Western region, his team went round some of the ramshackle schools where the youth he was seeking to educate were receiving their lessons. Some of the photographs survive to this day. The poverty in the air was palpable. Many of the children in the fading black and white photographs are in rags. Some are quite naked. Nearly all are barefooted. But their eyes are bright with hope as they pose with the politicians and civil servants in the team.
Two sets of Nigerian children then, bare-footed, half-naked.

Nobody saw the bare-footed children around Awolowo in the photo as a problem, and neither did the children themselves seem to think they had anything to be ashamed of as they struck poses for the flash bulb.

Many of them had walked ten to twenty miles from their parents’ homesteads and farms to get to school this morning. They had left their parents, who recognized the value of what they were doing, and who expected them to come back, walking the same lengthy miles through the footpaths and shrubbery to help out in the farm after school.

They had hope – many of the naked children in the photo with Awo – the beneficiaries of the vision and the largesse of free education from their leader and their society. Many of the wretched looking boys in the self-same photos have since gone on to fulfill the hope that shone in their eyes. They have become Professors of Surgery and captains Industry and leaders of thought in various ways. They would smile ruefully to see their old photos now.

The almajiris, by contrast, are poverty and wretchedness heading nowhere but south, and rapidly. They are children who will grow up soon to become untrained and untrainable young men and women. They will roam the streets with hunger in their eyes and anger in their hearts, young folks unfit for any meaningful occupation in the age of the internet, holding a grudge against everyone, including the religious leaders who purport to be their sponsors and supporters.

A piece of history is instructive here. Civil disturbance, for all manner of reason, was not an uncommon event, especially in the North of the country during the years when Ibrahim Babangida was the self-proclaimed military President of Nigeria.

In one of the worst episodes, when the streets of Kano had momentarily been turned into killing fields and soldiers were out in the streets seeking to impose law and order, it had become obvious that among the most enthusiastic killers and looters perpetrating the disturbance were the almajiri children, who roamed the streets sword and cudgel in hand.

The army general in charge of the troops, a lean and wiry old warrior from the Middle Belt, had his men disarm the young killers and sat them down on one of the the main roads of Kano, row after row of almajiri, a hundred, two hundred thick. The photos made good press.

After the young men had been sitting on the road for hours, as visible evidence that the Army was now in control and Kano was safe again, it fell to a prominent cleric to cry out in their support. His cry was that the soldiers were making the ‘innocent young men’ sit in the hot sun on the Kano highway, while their parents were waiting for them at home.

It was a serious plea, not done tongue in cheek. For all that it was as disingenuous as it was laughable. Parents? That was the first anyone heard that the almajiri had ‘parents’. If they had parents, what were they doing on the streets in the first place?

The same questions, the same mischief, and the same sinister implications surround the issue today, on a vastly larger scale than was even imaginable in Babangida’s time.

For since those ‘innocent’ days, there have been Al Qaeda, and ISIS, and Boko Harem, and countless other poisonous ideologies that find fertile ground in the minds of disaffected, disconnencted young men and women who have no knowledge, no hope and no stake in society.

The almajiri are a social menace, which has already poisoned the air and the water, contributing to mindless killings that have gone into the gory past of Nigeria, as well as constituting ready perpetrators and cannon fodder for ongoing terror. But the harm they have already wrought is as nothing compared to the social and physical explosions they stand to cause in the future.

It is not enough for anyone to sit smugly in Lagos or Ibadan and think the almajiri is a problem in Northern Nigeria, far removed from them. The demographics and the dynamics indicate that it is a problem of the North that will soon become a problem for everybody. The sociologic fallout from a dysfunctionally stratified society cannot be contained within the amorphous boundaries of artificial states. As long as Nigeria remains a federation, or even a confederation, and people are able to move across state boundaries without hindrance, the almajiri are a time bomb waiting to explode in Port Harcourt, as in Kaduna.

An example of the current ramifications of the related problems of street begging and the exploitative dislocation of disabled citizens is instructive. Every day, train and truckloads of able-bodied and disabled beggars are ‘imported’ into Lagos from different centres in the North and disgorged on the streets.

The situation makes nonsense of the efforts of Lagos to enforce free, compulsory education for its citizens. It also makes nonsense of its efforts to ensure all children are vaccinated against disease. It is an abiding nightmare for the social worker, and a point of worry and discussion for another day.

A few Northern leaders are waking up to the specific danger represented by the almajiri and the general dangers posed by a huge population of street dwellers disconnected from society, living off handouts from people, and providing canon fodder for political and tribal warfare.

The Governor of Kaduna state, Nasir el-Rufai, is trying to ban street begging, an act, which unfortunately will require more than a law to practicalise. The Governor of Kano is, as we have said, announcing proudly to the world that he is introducing ‘core’ subjects such as Mathematics to the education almajiri children are receiving in the schools specially created for them. Of course it is widely understood that those of the almajiri that are ‘enrolled’ in these ‘special’ schools attend school at their leisure, and go out from school as they please begging bowl in hand to ply their ‘trade’ on the streets. The Governor is celebrating what is essentially an exercise in futility.

How does a caring society begin to approach the problem of the almajiri with the use of knowledge, so that they give themselves an actual chance of getting a handle on it?
It is the million-dollar sociologic challenge that will determine if the North of Nigeria, and perhaps Nigeria itself, has a future.

But it is not complex at all. The solution, for the bold society that is cares enough to grasp the beast by the horn, is very straightforward. It is not about pounding the chest about introducing ‘core subjects’ in schools nobody takes seriously.

The scruffy children in the almajiri scenario need to be remade in the mould of the naked children posing in the photo with Awolowo when he gave them Free Education and set them on the trajectory to a new life. Those children had parents to go home to, parents who followed their progress in school and ensured they did their homework and passed their exams.

That is the missing link. Every child in a healthy society must be owned by parents or the State. Every child, like every adult, must be documented. Every child for who there is no one to perform the functions of parent must become a ward of the State.

The state becomes the parent and performs all the functions of parenting – from housing to feeding, to loving and nurturing to disciplining, and supervising homework.

If this is not done in Kano, in Kaduna, and in all the places where the almajiri are a blight on society, building hundreds of schools and ‘introducing core subjects’ will be just money down the drain. The children have to be named and owned first. That they are in the millions is just reflective of the fact that the North has a huge problem on its hands, and the solution will be expensive.

But not solving the problem with good thinking is certain to be even more expensive for the North, and for the Nigeria project.  Mark my words.

Dr. Olugbile is a consultant on mental health and health services development