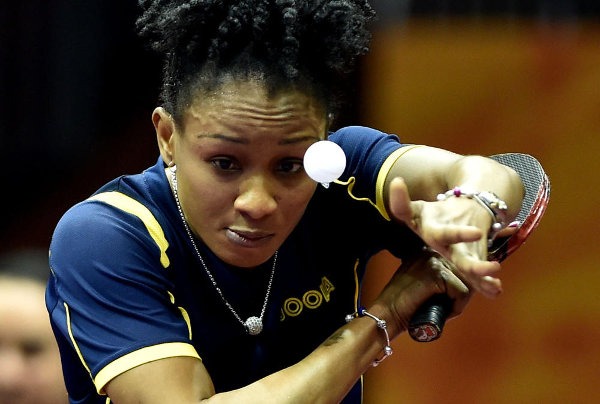 Funke Oshonaike’s name is almost synonymous with female table tennis in Nigeria. She seems to have been around forever, a cat with nine lives in the game, winning many laurels in Africa and in global competitions in an illustrious career that has spanned 27 years! and still counting. In this interview, the current African champion, now 41, says she has no intention of quitting the stage until Nigeria produces another champion to dethrone her.She also speaks about how the game found her.

Why did you choose table tennis?

My brother playedtable tennis, so I guess table tennis chose me. It’s a special talent from God and very popular back then. I played on the streets in Somolu area of Lagos with boys of my age. It was fun then. I realized I was a subject of betting because some people will place bet on me to beat guys and they will encourage me to go ahead and win.

Last week, you emerged the African Women’s Single Table Tennis champion in Morocco, a title you last won 16 years ago. How best would you describe your feelings the moment you won?

Unbelievable! I never expected it and I was on top of the world with so much joy and happiness. It was a mixed feeling for me in Morocco. First I was so sad that the Nigerian government did not provide money for other female players to turn up and so the country is out of two global competitions coming up in 2017 and 2018. It was frustrating because I was the only female. I cried out in anger. I want to advise those in authorities not to kill the sport I love so much. However, I never knew God had a great plan for me. Somehow, I found myself in the final against the number one player in Africa who was yet to lose any match to an African in the past five years. It was like a mission impossible but I decided to give my best shot. My coach, Segun Toriola, told me to just hang in there and enjoy myself. I did and my opponent was making mistakes to my advantage. I’m so happy because it’s like a divine arrangement from God to crown my efforts.

You led Team Nigeria at the opening ceremony of Rio 2016 and was also the assistant captain of the team; what exactly do you think accounted for the team’s abysmal performance at that event?

The story of the Olympics was indeed a sad tale. We did not prepare well. We did not organize ourselves well and that was why the country did not do well generally. We were billed to go on training tour which never happened. The morale of the athletes was generally low and there was no way a good result could come from such situation.

What do you think are the three most critical challenges facing athletes and sports in Nigeria?

That is a tough one. We lack good coaching, exposure and also planning. If we can look into these areas, things will get better for other sports in Nigeria.

Are there any signs we are, at least, trying to deal with these challenges?

Frankly, there are no signs anywhere because the problems we talked about years back are still manifesting. Look at funding; we cry out every day for government to sponsor us for competitions or to get corporate organizations to be committed more in sports.

You began representing Nigeria at 14; did you know you would come this far?

I never knew I would go this far, but I wanted it and I am happy. It is a very pleasant one for me. People talk about retirement but I challenge them to bring people who can beat me in Nigeria. I am not only the best in Nigeria now; I am now the best in Africa. My dream is to have players as good as I am who will be able to beat the Egyptians and compete well at the global stage. 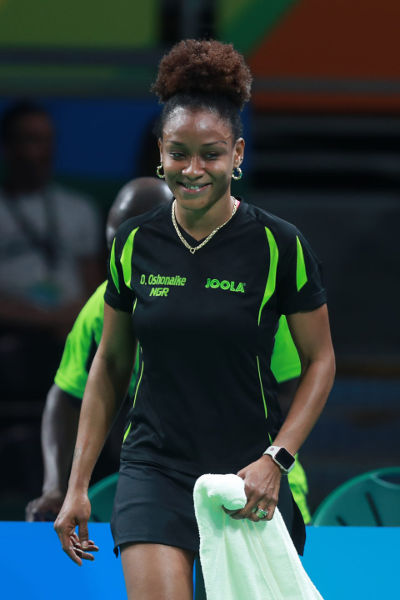 You won four gold medals at the All African Games in Abuja in 2003 just six months after having your first child. It must have been very challenging for a post-natal woman; how did you cope?

That was a great achievement for me in Abuja, but it came with a whole lot of hard work. I was still training till seven months of my pregnancy, as you know that being pregnant is not sickness, and I started training two months after I gave birth. It was not easy but I had goals and dreams, so I followed them. God answered my prayers and it was wonderful.

After getting off to a winning start in the preliminary round at Rio 2016, you crashed out in Round 1; how did that make you feel?

I guess I can’t have my cake and eat it. After carrying the flag of Nigeria a day before and coming back to my room past 2am, there was not so much I could have done during my matches. Thank God I won the first game and, unfortunately, I had to play again the same day with about three hour’s interval.

Which was more painful – crashing out or losing to a 15-year-old?

I didn’t crash out because the girl is even more rated or younger than me but I would have won under a normal situation. I didn’t really feel so much pain; I was very proud of myself.

What is the future of table tennis in Nigeria?

We have a bright future because we’ve got talents and a good leader like my president, Enitan Oshodi, but we need good coaches and lot of competitions. That is why government must find a solution to the problem of funding sports. You cannot expect good results when we are not investing in sports and in the athletes. We see our other colleagues at the global stage, and in comparing notes, one it is clear we are just too far behind.

Even at 41, you have vowed to keep playing for Nigeria; when are you going to stop?

I told you earlier, I’m going to stop when we have somebody that’s far better than Funke Oshonaike and when things get back to the way they used to be.

It was said you mostly pay your way to represent Nigeria at international events; what drives you?

Love and patriotism. I derive joy in rendering service through my talent to my fatherland. I have really sacrificed for my country. My president (Oshodi) has helped a lot too.

Why do you think other athletes are not willing to do same (pay their way to international meets)?

It is a funny question. Everybody cannot be like me. I also do some of these things to boost my career. They don’t have what I have and they were not born in the 70’s. It’s not just right and I can’t blame them for that. Things are not easy generally as people in Nigeria are also talking about recession. I am just saying, it is important to make extra effort and not to allow recession kill our other sports.

If it weren’t tennis, which other sport would you play and why?

Athletics, badminton or squash. I was into athletics back in school and I was actually playing both badminton and squash, too, because they are like table tennis.

You have always talked about your husband’s support as a factor for your success; what other factors have been in your favour?

My children have been very good and understanding, too. They are so good to me because all the months and weeks I stay out, they won’t complain; they just remain calm and wait for me. But my father is my number one fan. He gave me all the support from my tender age.

I do a lot in the gym – jogging, carry weights like three to four times in a week and having good rest when I have the opportunity.

I have done so much for the sport but I would like to be remembered as a woman that gave all to her country. It is not easy to win an African title at the age of 41. It is also tough to win four gold medals at a continental competition for the country. I give God all the glory

What’s next after tennis?

Be a sports administrator in Nigeria or continue with my work career in Germany depending on what is happening in Nigeria. I expect the ministry of sports to make move on what next for Segun Toriola and I, but if not, we are good with what we are doing respectively.