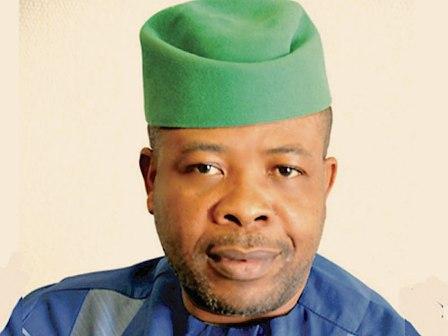 He brushed it aside, saying that he would not lose sleep over the prophesy. But you could tell, even by a casual look, that it was not the new year present he was expecting.

Governor Emeka Ihedioha of Imo has been trying to be a man since Father Ejike Mbaka prophesied on New Year’s Eve that his days as governor are numbered. It’s not been easy.

One source told me that there had been a suggestion in Government House, Owerri, to get either Reverend Uma Ukpai of Uma Ukpai Evangelistic Association or Most Senior Apostle David Unuefe-Ikhuiwu of the Christ Chosen Church of God, or just anyone with some weight, to render a contrary prophecy, but nothing has come out of the attempts, so far.

In spite of the appearance of calm, an inner turmoil has been triggered by the speculation that the Supreme Court could give its judgement on Wednesday, on the Imo governorship election.

The timing of Mbaka’s prophesy, not to mention speculations that the Father refused an invitation to bless the Government House, has obviously deepened Ihedioha’s misery, however hard he has tried to hide it.

Mbaka told a crowd of worshipers at the watch night service at the new Adoration Ground in Emene, that a big change was coming to the Imo State Government House sooner than later.

“In spite of all that would happen this year 2020,” he said, “there is hope. In Imo, there is hope. Hope, hope, hope. Imo people have suffered but God is raising a new hope that would be an agent of salvation for them.

“He is coming with a new flag to restore the dignity of that noble land. A new leadership that will break barriers and there would be joy in the land of Imo. Lift your candles as I bless Hope Uzodinma and I empower him to spiritually take over.”

Mbaka had barely said the word when Uzodinma’s phone began to jam with calls from well-wishers, including a few right there in Adoration Ground, who wanted to share the news with him.

But the oracle which either does not understand or respect electoral math, has said the fourth shall become the first; that is, Uzodinma borne on the wings of a prophecy, would sail over the numbers in an act of spiritual defiance, and be installed in Government House in spite of voters

The man who rose to fame by prophesying that former President Goodluck Jonathan would fall and that Muhammadu Buhari would take his place – and it came to pass – had, once again, made yet another potentially remarkable prophecy.

But how would this be?

In the case of Jonathan, he lost power at least three years before he lost the election. Somehow, however, he managed to keep enough money flowing to buy the conscience of a few desperate and hungry people who could have told him the truth.

His government’s incompetence loaded the gun and handed it over to an opposition determined to pull the trigger. His defeat was a prophecy foretold.

But Imo? How? It’s true that for most of his eight years in power, former Governor Rochas Okorocha ran the state worse than he would run his personal estate.

Owerri was the country’s amusement park, with over-priced statues of a few renowned crooks and the governor’s life-size billboards to show for it.

While Okorocha refused to pay salaries and pensions for months, he created a Ministry for Happiness that was supposed to make the deprived laugh on empty stomachs, while he reserved choice appointments and benefits for members of his own family.

As he was leaving office, he had his son-in-law, Uche Nwosu, waiting at the door with the flag of a brand new political party – Action Alliance (AA) – to take over from him.

But providence that could ultimately have used his son-in-law to punish him for his malfeasance, deferred the day of reckoning.

Instead, voters, with significant support from the clergy, professionals and civil society, chose Ihedioha of the Peoples Democratic Party (PDP), to replace Okorocha.

Imo was not just fed up with Okorocha, it was also fed up with family rule, and the rule of the All Progressives Congress (APC), whether as APC, AA or in whatever guise Okorocha framed it.

And now, to hear that APC is coming back? I do not know what Oracle Mbaka saw, and to be fair, he was modest enough to admit that he also does not know how it would come to pass, after all, it was “a spiritual take over.”

But apart from the disastrous record of APC in Imo, there are more than enough grounds for common sense to bet against the odds of Mbaka’s prophecy coming through.

From the result of the March governorship election in Imo, Uzodinma is not second or even third.

In a state with a total population of five million, and over two million registered voters out of which 714,355 total votes were cast, the APC candidate scored 96,458 or 13.5 percent of the valid votes cast.

But the oracle which either does not understand or respect electoral math, has said the fourth shall become the first; that is, Uzodinma borne on the wings of a prophecy, would sail over the numbers in an act of spiritual defiance, and be installed in Government House in spite of voters.

That’s not the only oddity. There’s also a spectre to it all that defies logic and tempts evidence.

All three losers – Uche Nwosu, Ifeanyi Ararume (of the All Progressives Grand Alliance)and, of course, Uzodinma, lost at the earlier stages of litigation – the tribunal and appeal.

It is rare, even improbable, for the Supreme Court to give a judgment contrary to the rulings of two lower courts, which had taken a similar stand in the case so far.

The litigants had argued on appeal that Ihedioha did not obtain the constitutionally required one-quarter of the votes cast in at least two-thirds of the 27 local government areas.

But the three-member panel of judges unanimously rejected the argument and upheld the judgment of the tribunal.

While we wait for the outcome of the oracle’s forecast, the distressed may take comfort in the fact that even the oracle has its bad days. Mbaka said that neither Buhari nor Atiku would win the 2019 election. He was right about Atiku; but spectacularly wrong about Buhari

They ruled in favour of the governor, except on one count – the cross appeal by Ihedioha – where one of the judges dissented.

The Supreme Court, usually, examines facts and evidence, weighing them against decisions reached at the lower courts.

But the oracle suggests, without saying so, that the Supreme Court will on this occasion, reverse the unanimous decisions of the lower courts and, in a fit of spiritual alacrity, cancel the elections and even award to a respondent relief that he did not seek in the first place.

The prospect that APC will get from the court a victory that it handed over to PDP even before the election is already causing subdued excitement in some circles in Abuja.

Ararume and Nwosu, who would have killed for this prophecy, are left wondering how the fourth might now be the first, ruling out the second and third.

On its own part, the Catholic Church in Nigeria is suitably embarrassed. Mbaka’s variety of political theology has put the church in a tight spot more than once in recent times, the most scandalous being in late 2018, when the oracle said PDP’s vice-presidential candidate, Peter Obi, and his principal, Atiku Abubakar, would lose because of Obi’s stinginess towards most people in general and towards him in particular.

The church has explained that Adoration Ministry, the platform that brought the oracle to the limelight, is his side hustle.

But it’s obvious that in spite of that explanation, in spite of the hand-wringing about what to do with him, and in spite his redeployment later to the hinterland, the Catholic church is still beset by the fundamental question of how quickly an ancient organisation with extremely complex and monstrous bureaucracy, can deal with isolated problems in far-flung branches in peripheral locations.

Call it the tyranny of adaptation, if you like.

In its current manifestations, it may show up as sex crimes in Dublin or a dangerous form of political theology in Emene: the central question remains how quickly and transparently the church can respond to existential issues within its fold.

While we wait for the outcome of the oracle’s forecast, the distressed may take comfort in the fact that even the oracle has its bad days.

Mbaka said that neither Buhari nor Atiku would win the 2019 election. He was right about Atiku; but spectacularly wrong about Buhari.

Yet, the coverage; not just coverage, the trepidation or excitement – depending on which side you are – that his prophecy has received is an indication that he is still being taken seriously. Translation: there is hope for both sides.