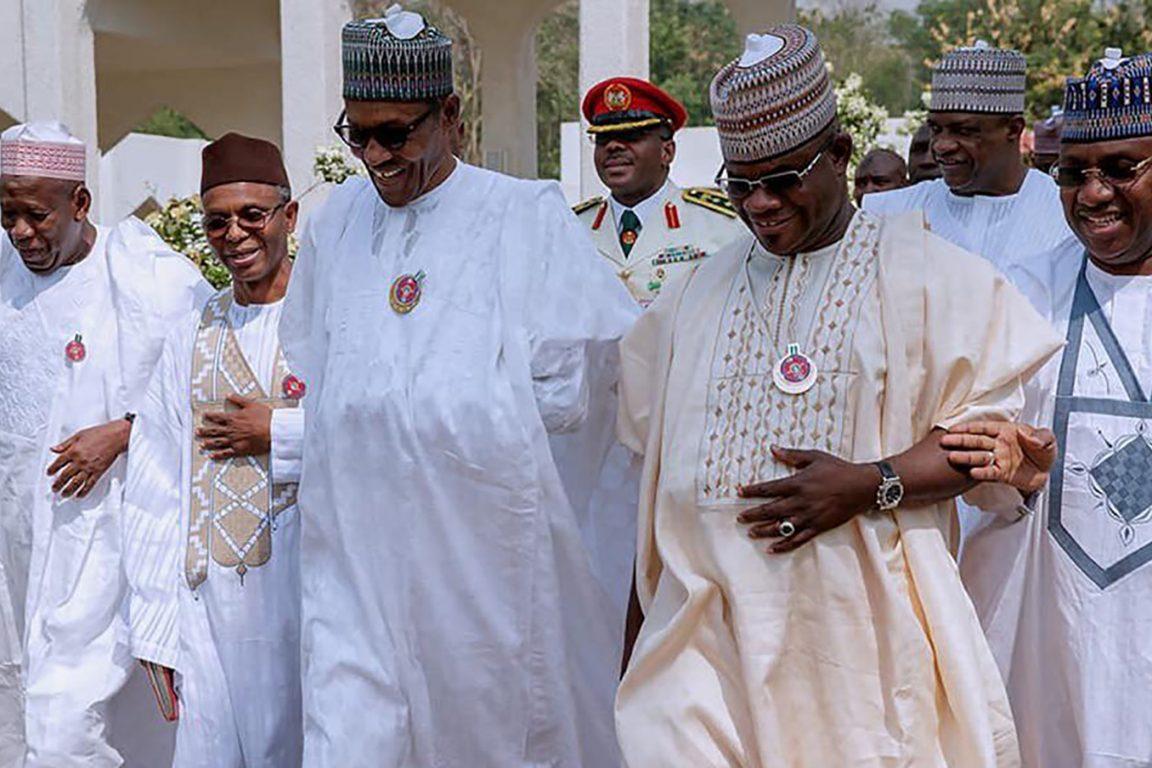 A critical pillar of democracy will be cemented if President Muhammadu Buhari followed through a course of action initiated last week.

Apparently emboldened by a renewed mandate, he has finally raised a committee to implement the historic fourth amendment to the 1999 constitution with a view to ensuring better separation of powers in the Nigerian polity.

Led by the Attorney General of the Federation, Abubakar Malami, the 16-man panel is to give teeth to Act No 16 of 2018 of the National Assembly granting full financial autonomy and independence to the Houses of Assembly as well as the judicial arm in the states.

President Buhari earlier signed the act into law in June 2018.

The long and short of it is that the credits of both arms will henceforth be paid directly to them as their expenses will no longer be tied to the budgetary processes of the executive arm at the state level.

To be sure, the fourth amendment would not have been necessary had the political actors been charitable enough to obey existing provisions of the 1999 constitution which already granted financial autonomy to the two arms of government.

More rigour, greater diligence ought to attend the recruitment process for the legislature at the state level, therefore. Today, what you find is that in most cases, sitting governors practically determine those fielded as party candidates to occupy the state assembly

For instance, as for the judiciary, section 81(3) of the 1999 Constitution stipulates that: “Any amount standing to the credit of the judiciary in the Consolidated Revenue Fund of the Federation shall be paid directly to the National Judicial Council for disbursement to the heads of the court established for the Federation and the states under section 6 of this constitution.”

But even after the Federal High Court made a landmark pronouncement to enforce that extant section in 2014, the governors conveniently found one excuse or another to disobey.

In a few cynical cases, some responded by merely calculating the salaries and allowances of the Chief Judge and judges and transferring same to the former. Of course, the state emperors are unwilling to accept the autonomy that enables the two arms have any discretion or decide their own priority in terms of projects and execution.

But by its terms of reference, the Malami team is now expected to, within three months, assess and review the level of compliance by all the 36 states with Section 121(3) of the 1999 Constitution (as amended), monitor, ensure and cause the implementation of financial autonomy across the Judiciary and Legislature in each state.

They have a three-month tenure.

While undertaking that national audit in the weeks ahead, the body will likely find that Lagos is perhaps the only exception where relative autonomy is already enjoyed by the two arms of government, hence the ability of the legislature to provide robust oversight to the executive arm.

While the remaining state chief executives have grown accustomed to the life of a demi-god in their respective jurisdictions, with the Speaker and Chief Judge more or less reduced to poodles of the governor in sheer mockery of the lofty ideals espoused by Frenchman Montesquieu in the 18th century.

While the National Assembly was championing the fourth amendment, we saw farcical dramas in many states where the lawmakers, the supposed beneficiary-to-be, were heard raising their voices shamelessly against the motion

It is, therefore, natural that those emperors will interpret this reform as a diminution of their imperial powers.

So far, the situation at the state level has indeed been one of untold despotism. The Speaker is free to indulge himself or herself as “lord” in the “hallowed chamber”, but is soon reminded of who is “supreme” when made to wait, sometimes endlessly, in the Governor’s Office to discuss money matters.

And for fear of losing favour in the eyes of the Government House, the judge is, in turn, scared of entering judgement that displeases the governor. He’s often left therefore to use their discretion in scouting for legal technicality to either excuse the infractions involving state officials or dilute justice.

This perhaps explains why the struggle to push financial freedom for the state legislature and judiciary has been a tortuous one.

While the National Assembly was championing the fourth amendment, we saw farcical dramas in many states where the lawmakers, the supposed beneficiary-to-be, were heard raising their voices shamelessly against the motion.

Of course, they were either following the cue from the paymaster in the Government House or unsure if his door would not be shut against them when next they called and their next meal ticket withdrawn, in case they spoke otherwise.

Of course, once allocation to the other two arms of government is made a first-line charge, the Speaker and the Chief Judge will find themselves less at the mercy of the governor in the discharge of their duties, thereby enhancing the separation of powers as intended in a truly federal state.

However, while conceding autonomy to the two arms, the Malami panel will serve national interest if it is able to prescribe creative measures to strengthen the accountability mechanism within them to ensure that we do not end up unwittingly replacing the “tyranny” of the executive with the irresponsibility in the other two arms, thereby merely “democratizing” looting.

Those who harbour such fear will cite the case of National Assembly as graphic example. As recently revealed by Senator Musa Adede, when the fourth republic took off in 1999, a senator’s monthly salary was only N89,000. When other allowances were added, the total was still less than N220,000.

As the supremo of the ruling party, President Buhari will, therefore, be helping to fertilise the tree of democracy in Nigeria by ensuring his own party sets good examples

The culture of humongous eight-digit salaries only began when financial autonomy was similarly granted the federal legislature.

Without any sense of patriotism or the pang of conscience, the federal lawmakers simply resorted to self-help upon receipt from the finance ministry by sharing the money among themselves.

Thus began dubious terms like “quarterly pay”. Such that Nigerian federal lawmakers otherwise notorious for sloth and absenteeism now ironically rank as perhaps the highest paid in the world with senators carting home a staggering N13.5m each monthly as “running cost”, aside N750,000 entered as “salary” and another N200m entitlement for “constituency projects” annually.

The challenge then: how do we ensure that the bug is not replicated in the state legislature and judiciary?

But beyond ensuring financial autonomy for state legislature and judiciary, let it be recognised that the polity will also be better for it in the long run if greater attention was accorded the recruitment process for the law-making arm arguably the most critical given its foundational value.

If we realise that the law is the fulcrum on which the society revolves, then we will better appreciate why legislature is the mother of democracy.

As the supremo of the ruling party, PMB will, therefore, be helping to fertilise the tree of democracy in Nigeria by ensuring his own party sets good examples. Of course, worthy candidates cannot emerge in a situation whereby party primaries become bazaar in which those with most dollars are awarded party tickets.

More rigour, greater diligence ought to attend the recruitment process for the legislature at the state level, therefore.

Today, what you find is that in most cases, sitting governors practically determine those fielded as party candidates to occupy the state assembly.

While there is wisdom in saying the governor needs “like minds” to ensure a legislative concurrence for his vision in the next tenure, the sad truth is that such argument often becomes a smokescreen to extend the frontiers of cronyism.

While there is wisdom in saying the governor needs “like minds” to ensure a legislative concurrence for his vision in the next tenure, the sad truth is that such argument often becomes a smokescreen to extend the frontiers of cronyism

Those who end up in the fabled “hallowed chamber” are usually only a little better than political slaves who will not consider any boundary too sacred to cross nor any errand too ludicrous to execute for their masters.

Often told today, for instance, is the story of a greedy emperor who, on the eve of exit from office, secured a hefty loan from a global money-lender and practically pocketed the dollars.

Colluding with the managing director of one of the nation’s leading banks (who kept dashing in and out of the state capital in private jet) and rogue regulators of the financial sector to abridge due process, he immediately diverted the humongous sum to black market at a time dollar exchanged at N520 and the official rate was N302.

Not only was the difference in billions of Naira pocketed, even the balance was also booked spent on largely phantom projects!

But such rape could not have been contemplated, much less executed brazenly with impunity, if a virile legislature exists in the said state and the “hallowed chamber” had not sadly become a camp of political slaves and hallelujah boys and girls.

Of course, the easy money milked from such cowboy transaction was predictably parlayed to funding a lifestyle of unspeakable debauchery amid mass poverty in the said state; acquisition of palaces in Miami and Dubai, and regular jet-load of foreign harlots for orgiastic buffet.

So extensive was the looting by this kleptocrat that his name on the title of castles also acquired all over Abuja with stolen money was hurriedly changed to fictitious ones weeks before leaving office!

Now, the severity of the referenced financial atrocity visited on the relatively poor state is better appreciated when realised that it is indeed the unborn generations obliged to repay money looted by dollar-obsessed unconscionable ancestor.

Since the wound is still fresh, it won’t be too difficult for sniffer dogs to unravel that monumental heist in one of the southern states if Buhari truly means business.