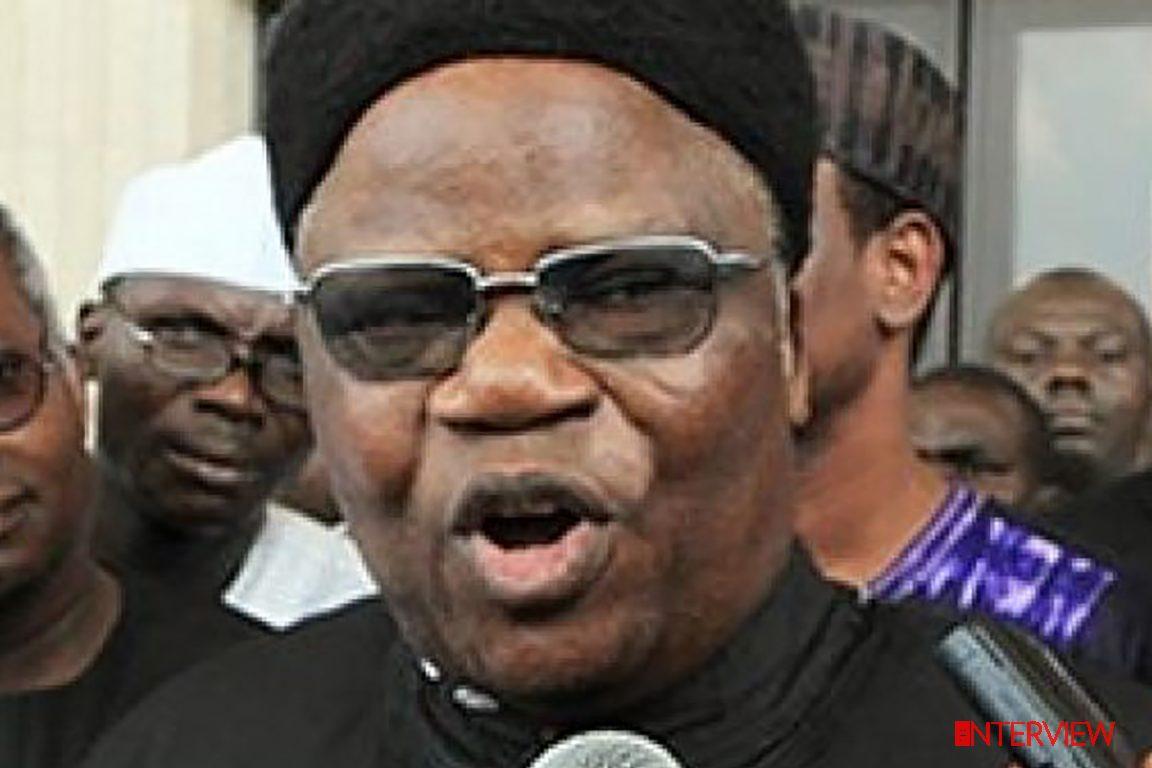 Former Minister of Information and ex-Chairman of the Congress for Progressive Change, Tony Momoh, offered rare insights into forthcoming elections and a range of other topical national issues:

The elections are about two months away. And the President Buhari’s refusal to sign the 2018 Electoral Amendment Bill, has been criticised as an excuse to rig the elections.

The President is one of the most experienced leaders Nigeria has ever had. He knows the country he is president of. He fought during the war as a junior officer throughout the war. He rose in the military. He retired, ruled the country.

He knows the country like his fingertips more than any other average Nigerian. And he came into politics, not to be a senator. He came into politics to be President. He contested in 2003, 2007, 2011 and 2015. So, nobody can claim to know the country more than him. Anything he does, he does more in the interest of Nigeria than in the interest of any other person. And he is selfless.

What I am saying is that he will not sign any document because you want him to sign that document. He will sign that document if he is convinced that it is in the best interest of Nigeria, not in his own interest. That is what I know about him. You cannot pressure him to do anything he doesn’t believe in.

A majority of political parties appear to support the electoral bill. Now lawmakers are being encouraged to override the presidential veto. Is it not a sign that the President is only looking out for himself?

You were CPC national chairman when Buhari ran for president in the 2011 election. You all believed the election was rigged by PDP. In fact, you believed PDP rigged at every election cycle. Is Buhari on a revenge mission?

That is why you do not understand the President. All of us, whether you like him or not, agree that he is a man of integrity. When he won, he called INEC and said please, in 2003, I complained that the election was rigged. I went to court, up to the Supreme Court.

In 2015, he won. He has been complaining about abuses and he is there now. He would not want anybody to do anything that he himself complained about. If he does, God will not forgive him. If you have someone making such pronouncements, then, you must know and I can assure you that the man is not a rigging man.

The man is a highly principled and disciplined man. And he believes in due process. Let me tell you, if the elections are held today and he loses, he will go home. What has he to gain from cheating? When you know that you came from a particular level, a creation and you are going back there to answer for whatever you did.

He will sign that document if he is convinced that it is in the best interest of Nigeria, not in his own interest. That is what I know about him.

How do explain then, all the intimidation of the opposition by EFCC and other security agencies?

And it turned out that it was Theodore Orji’s sons they had been monitoring and went to, not Atiku’s sons. They said that Obi’s accounts had been frozen. It turned out the agencies are not the ones who had done that.

The seed you have sewn will bear fruit for your reaping. And part of your reaping is the outcome of your actions. And if any monitoring agency discovers that you have done anything that is questionable, they must question you. Why don’t you want to be questioned? Who is above the law? Nobody.

Do you believe the President has succeeded in curbing corruption?

Nobody can succeed in curbing corruption. Let me give you a fundamental analysis of corruption, which we don’t look at because we forget the spiritual dimension. There are two areas of contest on earth today. The area of evolution and the area of creation.

You know the origins of the species by Darwin. And they say we are the products of thought. We think, therefore, we are. You know that thought is a function of the brain. And brain is part of the body. But those who believe in creation believe we came from above.

Our parents were not apes. If you look at the creationist, they know that the whole of creation is packaged, ordered and orderly. We are part of the orderliness to move into the material world to grow and go back to paradise to account for what we did.

But the evolutionists believe that we came from the lowest forms of life and developed enough to become man. How many apes have become man since man appeared on earth? Look at those that believe in survival of the fittest and initiated competition as a way of life.

They started conquering territories. If you are not strong enough, you are eliminated. When as a matter of fact, the creationist looks at cooperation to bring order and discipline into the environment. When you talk of survival of the fittest, then you take from those who don’t have to add to those who have.

And we became accumulators. It is part of accumulation to be corrupt. In every community in the world today, there is this problem of struggling to accumulate. And accumulation is the outcome of corruption. That is what it is.

You cannot cure corruption by making a law. It depends on what ladder you are on the spiritual ladder. And here, we are down, down the ladder: cheating, 419, and so on. Do you think in the western world, they are not corrupt? It is the law they are afraid of.

We must package our laws to tackle and tame the law of taking so that we can gain more. You can think because there is still corruption in the administration, therefore, he is not successful. Nobody sits down now to discuss corruption. We know that.

When they are discussing corruption, they are looking to know if there is anybody behind them. There are certain amounts you want to put in the bank now, they won’t accept because they know they are being monitored. TSA has done a lot to bring order and discipline.

The man is a highly principled and disciplined man. And he believes in due process. Let me tell you, if the elections are held today and he loses, he will go home. What has he to gain from cheating?

At the time you were CPC national chairman, Buba Galadima was your party secretary. And today, he is with the opposition and accuses the President of betrayal. Do you also feel any disappointment that the President hasn’t accommodated you in his government?

Who said he has not accommodated me? First of all, from the perspective I am talking to you is the spiritual dimension. I am here to serve. And the person I serve and because of whom I serve is God all mighty. I am moved in the direction of Buhari as one of those who must lay the foundation of what Nigeria will be as a world power.

In 2015, we witnessed how the APC side-lined the southeast and south-south region in zoning leadership positions in the National Assembly and appointive positions. Are they being haunted by that shortsightedness today?

There were no short-sighted decisions. If it were those years and you wanted to reflect appointments in the votes you get, the southeast won’t get anything or the south-south. I come from the south-south. Edo State gave 46 percent of its votes to Buhari.

All the ministers from the southeast apart from one or so are senior ministers. Look at other positions for instance, NDDC and other areas. They are there. Edo State for instance, it gave most votes. Of course, they have the elected chairman of the party, but tell me, the minister from Edo is a minister of state.

Now, it is not the ministerial appointments that even matters. The southeast has the greatest deficit in infrastructural development. But the fact is that for 16 years, what did they do about Onitsha-Enugu Road, Enugu-Okigwe-Port-Harcourt Road, the Second Niger Bridge, erosion and so on? This administration is doing them. If it were to reflect the votes, they wouldn’t be done.

There is no way PDP can sweep the southeast. For instance, people say there would be the Peter Obi factor. It is not simply because you have somebody from the southeast that will make the PDP win. There is a precedent. In 2003, Buhari had Okadigbo; in 2007, Buhari had Ume-Ezeoke. Did they vote?

Why do you think the PDP are very confident they are going to sweep most of the votes in the southeast?

So that is the latest you can say about the southeast. So, there is no way PDP can sweep the southeast. For instance, people say there would be the Peter Obi factor. It is not simply because you have somebody from the southeast that will make the PDP win.

There is a precedent. In 2003, Buhari had Okadigbo; in 2007, Buhari had Ume-Ezeoke. Did they vote? So, don’t be excited by Peter Obi. Peter Obi is an excellent person, but the reason Peter Obi is not any credit to Atiku is even revealed in Anambra.

In Anambra, he will not have the support he would have expected as a homeboy because himself and Obiano are at loggerheads. And Obiano will more readily campaign for APC than PDP because of his relationship between Peter Obi and him. These are practical things. We are monitors of governance as journalists. These are the things we ought to be looking at.