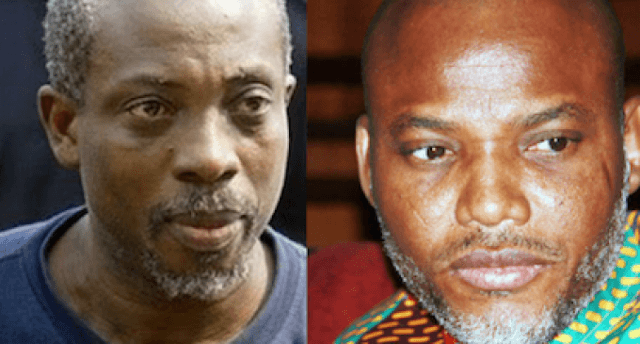 When the founder of the Movement for the Actualisation of the Sovereign State of Biafra (MASSOB), Ralph Uwazuruike, told The Interview in August that the leader of the Indigenous People of Biafra, Nnamdi Kanu, was being used to destroy Biafra, I thought it was their private fight playing out at last.

In the early days of MASSOB when Uwazuruike was planning to start Radio Biafra in the UK, he had reluctantly recruited Kanu to run the shop. One thing led to another and along the way the ambitious young Kanu had his own ideas. He supplanted his boss and took charge.

He has grown from pirate radio boy to something of a rock star and appears well underway to raising his own army, a fantasy that might, in the end, prove Uwazuruike right.

Before Kanu went into hiding last week, he had started reviewing a “guard of honour” as part of his daily routine. He announced the formation of the Biafra Secret Service (BSS) when he was receiving Senator Enyinnaya Abaribe, a disciple who, after posting his bail bond, ought to have taken the young man to the hospital.

With support from a section of the Igbo elite led, surprisingly, by constitutional lawyer, Ben Nwabueze, Kanu has gone much farther since he formed the BSS. He paraded a Turkish tout who was supposed to have endorsed the Biafra state and deluded himself into believing that it is just a matter of time before other foreign governments will line up behind his ambition.

If he was in too much hurry to read what happened to Biafra 1 when Odumegwu Ojukwu needed global support, he should have simply Googled South Sudan and Eritrea for a current version of treachery and international politics.

Kanu has rallied hundreds of young people to his cause and managed to sell them on a fool’s paradise – a promise of heaven on earth, once Biafra is realised.

Regrettably, he has worked his supporters to a lunatic fringe; and the horrific videos from Aba and other parts of the South East in circulation last week showed how dangerously close the country was to the outbreak of another major bloody conflict.

We can argue all we want about who cast the first stone – IPOB supporters or soldiers deployed in the operation code-named Python Dance. Much has also been said about the propriety and motive for the deployment of the soldiers and whether or not IPOB should be banned.

But no responsible government will fold its hands and allow the breakdown of law and order or watch aggrieved persons take the law into their own hands.

There were incidents of serious concern on both sides last week: the video of soldiers making unarmed youths roll in the mud and lie facedown at gunpoint in the mud or the video of suspected IPOB members in secret locations beating some folks believed to be from the North with planks and frisking commercial vehicles for “non-Biafrans” were like scenes from the early stages the Rwandan war.

These were extremely dangerous and frightening spectacles, and as they unfolded, Kanu the pirate radio warrior, who had been praying for war, was busy looking for a place to hide. The attitude of the soldiers identified in the video was deplorable and should be punished; but God knows that if soldiers had not been deployed it would have been an answer to Kanu’s prayer for mayhem.

If you think it’s an overstatement, then you haven’t seen the videos yet.

We must, by all means avoid a repeat of Odi (1999) and Zaki-Biam (2001), where the deployment of troops after gangs clashed with the military led to the sacking of several villages and the killing of over 200 civilians. But those who are egging Kanu on must keep in mind that if they start a bush fire they can never tell how it would end.

Is there any merit in Kanu’s claim that the Igbo have been marginalised and unfairly treated, especially under President Muhammadu Buhari?

Sure. Buhari is the only presidential candidate in recent memory who would win an election with near-zero support from two major blocks – the South East and the South South. He should have seized the moment to broaden his base and run an inclusive government.

He didn’t. Yet, if Kanu thinks only Igbos are marginalised he only needs to look at Buhari’s “other room” to see that Igbos are in good company. Before Kanu formed his BSS, Aisha Buhari had sounded a public warning that her husband, the President, risked rebellion in the ruling All Progressives Congress by leaving those who worked to elect him out in the cold. She obviously felt marginalised.

Discontent inside the ruling APC is so real and touchable that if an elective convention was held today, it is uncertain that Buhari would win; yet he has surrounded himself with a few influential persons who will neither let him see the danger that he is in nor permit steps that could save him or his government. Buhari is a victim of his own choice.

It’s OK if Kanu or his supporters think that they are at the worst end of a bad deal. But he must keep in mind that the victims of the sort of mindless violence sparked off by his insane rhetoric are ordinary people – across ethnic lines – just trying to eke out a living.

The Igbos have done well for themselves and continue to well in spite of government. They have, over the years, built a heritage that should shame those who think that you can keep a people down by exclusion and spite. They don’t need Kanu to remind them of their achievements and the great work that still lies ahead.

Self-determination is a long, arduous and often costly journey. The Scots have been at it since 1853, the Catalans since 1922, and the people of Western Sahara for nearly four decades now. If Kanu is mad about achieving Biafra in his own lifetime as his wife said in a newspaper interview, those who love him should help him find a method for his madness or keep him on a leash.

I don’t subscribe to the view that anything is settled or that the current federal structure is serving citizens well. Those pretending otherwise know they’re deceiving themselves.

While the contest of ideas continues, however, I agree with the senior advocate Femi Falana, that serious state governments can, starting with matters that affect their residents the most, claw back acres of autonomy lost to Abuja within the ambit of the law. To act outside that ambit is to invite anarchy.