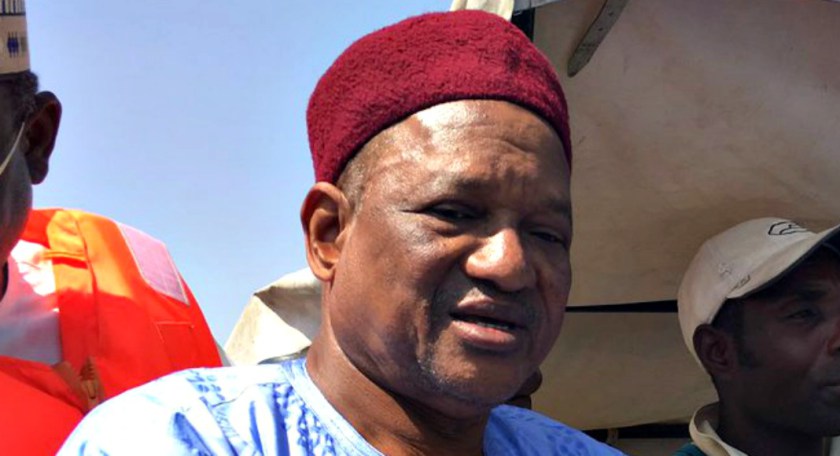 A good number of those who saw the video the first time may not have believed it until the man himself confirmed it.

His Excellency, former Governor of Yobe State and current distinguished Senator for Yobe East Senatorial District, Bukar Abba Ibrahim, confirmed that he was the one taped while having a sex romp with two women in a story published by Saharareporters.

It’s difficult to know what shocked the most – the tape or the casual audacity of Ibrahim’s admission after the release of the tape. While the country is in a recession, with ethnic tensions flaring and the Senate rehearsing a coup of sorts, Ibrahim had other concerns.

I’ve been talking with those who know him. It seems that even though Ibrahim’s conduct didn’t come to a number of them as a surprise, his casual admission stung them.

They know that he likes his bottle and nothing can come between him and his beer or whiskey. They also know that, like some other men, women are his soft spot, and he doesn’t particularly discriminate.

He even denied remembering where the thing happened, giving the impression that he routinely overcomes the urge by yielding wherever he is pressed.

This is the type of conduct for which as Governor of Yobe, he made a (sharia) law in 2000 under which violators would have been stoned to death or caned till they were castrated as the lenient option.

He is right that he has not broken any law, that is, if we decide for a moment to turn a blind eye to the (sharia) law, which he made for lesser mortals. His case was not exactly like those of his cousins in the House of Representatives who were accused of soliciting sex against the law in the US city where they had gone for training, or the mullahs that snatch girls from the cradle as wives.

Yet, once Ibrahim was caught pants down, he lost his self-respect and moral authority.

It’s interesting that a former governor who set high moral standards for others believes that he is entitled to a different set of morality.

If after two terms of fours years each as governor and ten years so far as a senator he does not care what impact his private conduct might have on his family, his constituents and the public at large, then his case is hopeless.

It requires suicidal courage even for the reputably wayward regular Joe to look a reporter straight in the eye, admit to cavorting with two women and tell the reporter to go to hell if they don’t like the video because it was a performance by consenting adults.

This remorseless stance by a 67-year-old public figure is an insult to his family and a disgrace to his position.

Ibrahim’s conduct cannot be justified by the low public expectation of members of the National Assembly. Nor is his attempt to place the blame at the doorstep of his political enemies in Yobe a meaningful defence.

I understand he has been saying that his enemies in Yobe are complicit in leaking the tape and that the main purpose is to weaken his base and set the stage for his removal as senator in favour of the incumbent governor who will pay any price to take his place in 2019.

That may be true. But if he knew he was a marked man and he still had any regard for his position, he would have behaved differently, if not for his own sake, then for the sake of those who elected him.

Perhaps something deeper is amiss here. Behind the façade of braggadocio is a desperate cry for help. Some who know Ibrahim say he was never like this, and perhaps they are right. In an environment where children hardly stay in school, it was Ibrahim who took himself to and enrolled himself in primary school.

It’s unlikely that he would come this far without the common touch, the kind that once moved him to set aside the criticisms by wonks in his cabinet in order to appoint a fellow he had tested and found competent, “as long as the fellow could write and spell the (All Progressives Party) APP.”

Where did the demons swallow up a man with such credentials? How did he descend from Governor Emeritus to a pathetic sex-crazed sexagenarian in need of a steel clamp over his zip?

It’s hard to tell, but Ibrahim’s brazenly casual response suggests that even though he knows he needs help, he will not bother to get it because nothing will come out of the two-minute video. He will not be called to account.

His family will endure the misery, the Senate is too distracted by its own schemes to care, and his constituents, hardened by years of scandal, may not even hold this indiscretion against him.

If there’s still anything left in Ibrahim’s former life of humility, struggle and solidarity, he should grasp at it to save himself and find treatment. That begins with an apology to his family, his constituents and the public.

And that decent response should not be as difficult as blustering after being filmed while shagging in a dingy guesthouse.