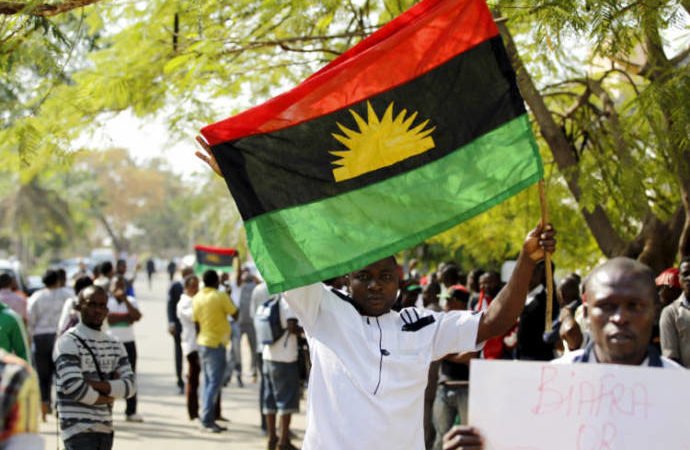 For nearly two weeks now the entire news space has been filled with what a LEADERSHIP editorial correctly described as “the valorisation of secessionist hubris.”

The purveyors, sponsors and foot soldiers must immediately stop this nonsense.

In apparent reaction to the irresponsible and unrestrained comments of the leader of the Indigenous People of Biafra (IPOB), Mr. Nnmadi Kanu, some clowns, under the umbrella of the so-called coalition of Arewa youths, held two press conferences last week in Kaduna, during which they gave Igbos a ridiculous ultimatum to leave all parts of the North by October 1 and also for all Northerners in the South East to return to the North.

Since then, virtually every ethnic champion has spoken in the name of one ethnic group or another for, against or in-between. Secession is the new demand for states and local governments.

For too long, post-1967/70 children who didn’t experience Nigeria’s civil war have been playing with fire. They have been behaving as if war is just another video game, in which contestants can score points without bloodshed and real-life consequences.

War costs more than data plan on a digital device; it’s more than virtual experience on a console. Nigeria’s civil war cost more than one million lives, displaced and disrupted the lives of millions more, and left even a greater number stranded with permanent scars.

Forty-seven years after the war ended, the country has yet to recover and both the Igbo and non-Igbo political elite have been hand-in-glove in betraying any hopes for genuine progress.

No lessons have been learnt. This is largely because the older generation whose responsibility it is to shine the light and call the rascals on all sides to order prefer to play politics with the country’s future. Those who are not playing politics are maintaining criminal silence, which is just as reprehensible.

It’s time to call a spade by its name. When Kanu was released on bail on April 28 most well-meaning Nigerians across ethnic lines who had called for his release, genuinely believed that he would respect his bail bond by disciplined and restrained conduct, especially in his public utterances.

But no. Not only did he dishonor his bond, he persisted in making inciting and vexatious comments and behaved as if the installation of the Republic of Biafra at which he would be crowned the new potentate was only days away. MASSOB leader, Ralph Uwazuruike, has also been trying to out-trash Kanu’s war and secessionist rhetoric.

On May 29 IPOB/MASSOB organised and led the shutdown of many parts of the South East, with mobs subjecting those who wanted to continue their normal lives to violent attacks.

Strangely, the police and the entire security apparatus looked on. Strangely, too, the governors of the entire South East and their political leaders, including Senator Ezinnaya Abaribe, who posted Kanu’s bail bond, turned a blind eye. Are we a serious people?

Kanu’s conduct and utterances since his release on bail are deplorable; but no less deplorable are the so-called Arewa youths and their “Kaduna Declaration.”

The fellows have no right under the constitution of the Federal Republic of Nigeria to deploy a traffic sign, much less order fellow citizens to leave their places of residence. That ultimatum was an insult on our collective sensibilities and must be condemned.

If the current feeble political leadership had not infected our security services and turned the police into fishwives, Uwazuruike, Kanu and the Arewa youth jokers will all be in custody by now; they have become a danger to themselves and to society. I laugh when the Inspector General of Police and his men pretend not know where the fellows are.

I’m also appalled by the mushrooming of ethnic groups whose singular purpose appear to be how to break up Nigeria and leave with their own fragments of the whole. From Yugoslavia to the Soviet Union to Sudan, breakups have hardly ended in the romantic tales canvassed by the instigators.

Of course, diversity and multiculturalism have their challenges, but there’s not a single one of the countries mentioned above that was not better off and more prosperous together than they are today. To put it bluntly, all the countries are worse off.

It’s been said in some quarters that after watching the South West produce a president on the heels of the OPC terror; the South South getting the same chance after Niger Delta gangs held the country hostage; and the North using Boko Haram to pave the way for Buhari, South East youths want to take the same violent route to power.

The subtext is more complex than it seems; yet there are those who think that if two wrongs don’t make a right, we might as well try a third.

There’s no point living in denial. The country is facing difficult times: millions of youths cannot find meaningful jobs, while millions more cannot get a decent education. The few who get it cannot get a fair chance to compete, while infrastructure is breaking at the seams.

Families across the length and breadth of this land are eking out a living with increasing difficulty, while the government grapples with a telling recession. It’s tough; and the harsh times appear to have made Nigerians more vulnerable to exploitation by ethnic and religious chauvinists and bigots.

Yet, in spite of the odds, there is strength in Nigeria’s diversity and promise in its vibrant market of 180 million people.

The conflict resolution mechanism is flawed; and because of the lack of transparency at the centre the states are getting away with murder.

Should there be more devolution of powers and responsibilities to the states? Yes. But you only need to inspect the havoc in many of the states to understand that until citizens themselves begin to hold governments at all levels to account, 180 million countries out of Nigeria will produce the same result.

We’ve seen it play out in fallen nations: those who valorise secessionist hubris or who cannot tolerate others that are not like themselves will ultimately replace one form of tyranny with another. The nonsense must stop.