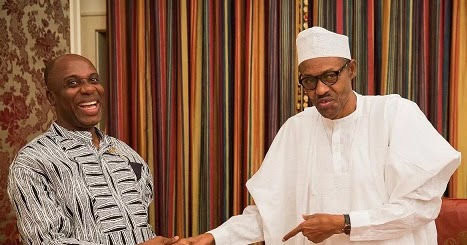 The full story of President Muhammadu Buhari’s two-day visit to Edo State is certainly not told yet. You must have read about the little drama of how PMB lived up his frugal reputation by accepting to pass the night in a very modest apartment (which some may even term Boys’ Quarters to the Governor’s White House) without any fuss even when the host, then outgoing Comrade Adams Oshiomhole, had offered to yield his own master bedroom.

Just as we presume, you have also heard about how one old widow brought the august visitor an unusual gift: a big goat. Her reason: just to say thank you to Mr. President for being himself.

Well, you surely have not heard how ebullient transport minister, Rotimi Amaechi (who had arrived a day ahead of PMB) ceaselessly teased Buhari, an inexhaustible bag of humour himself, in a way that left no one in doubt that there was a chemistry between them.

At the luncheon hosted by Comrade Oshiomhole for PMB and his entourage (which also included two other ministers and his political adviser, Senator Femi Ojudu), Amaechi was on call.

After PMB had helped himself to a modest serving and a glass of orange juice (we can confirm it was DANSA made in Nigeria by Dangote), Amaechi and others took turns to fill their plates with “swallow” (pounded yam culturally expected to be devoured with bare hands).

Before taking his seat next to PMB, Amaechi, with a straight face, asked: “Your Excellency, sir, my colleagues and I have a little request to make.”

“Are we permitted to eat with our bare hands?” Amaechi added.

Expectedly, Buhari burst into laughter, revealing his gap-tooth. Others in the state banquet hall that afternoon joined in the bout of laughter.

“Sure,” PMB said when he recovered his breath. “You are permitted to eat with your bare hands.”

Then, one mischief-maker down the table asked if Amaechi also takes permission if he wants to “eat” anything at the “juicy” transport ministry.

If you ever have cause to visit the Ikeja High Court complex in Lagos, pray you are not pressed to answer the call of nature. You either pay or no deal!

This was our finding during a recent visit. We had approached the convenience, only to be waylaid by a young chap at the door who explained that even though the progressives were in power in the state, not everything was free.

Funnily, the rates charged depend on the category of convenience required. What you pay for using the urinary is different from the sanitary bucket in the makeshift cubicle.

From a discreet investigation, we discovered that the public toilet block is being operated as pure business by a private investor (PPP?). Or, is it that he remits something to the authorities? If true, then it means Lagos’ IGR is partly from toilet!

Much as we are not opposed to PPP to fill the gaps in social infrastructure, we think that making people pay for using toilet in a court premises is a bit odd.

Providing a functional toilet for the use of members of the public should not become a channel for profiteering.

Once upon a time, a king reigned in the land of the Igodomigodo. He ruled over his people with heavy hand. At the slightest provocation, he cursed anyone at will. He freely slapped anyone, including members of the weaker sex.

Let us stimulate your imagination a bit.

He had mounted the throne about the time the umbrella party took over from soldiers in Naija some years ago. Initially, he was very humble, not only in character but also means.

Before he was called to ascend the stool of his forebears, we gathered, he was getting by, by engaging in land speculation, petty 419 and other forms of “obtain by trick”, as the police would say.

But as the profile of one of his “subjects” grew in the umbrella party so much that the said native (a retired senior cop) became known as the chief enforcer of the ruling party at the national level, the king, too, began to develop wings. Courtesy of this illustrious subject of his, who, by the way, is old enough to be his Papa, if not grandpa, he had a gigantic palace built for him in his domain with a five-letter name.

His town, which became a fixture in the country’s political map because of the “fixing” exploits of the old political crook, is a stone’s throw to the famous university named after a late illustrious politician in the state with “the heartbeat”.

As they say, many days for the Goliath, one day for David. After years of impunity, which involved openly engaging in partisan politics (of course, on the side of the umbrella party), His Highness met his Waterloo recently.

During the recent electoral contest to pick a new gomina for the province, His Highness was caught on camera slapping a woman who dared to challenge him for coming to her polling unit to canvass for his favourite candidate on the umbrella platform.

When the video went viral on the social media, the no-nonsense gomina of the province (whose own anointed contested on a rival platform) was mad. He issued His Highness an ultimatum to openly apologize to the poor woman who was dealt heavy royal slaps.

But consumed by arrogance, our friend refused to eat the humble pie. Predictably, the combative gomina eventually taught him a big lesson by disrobing him, rejecting the “half-hearted” apology tendered.

That, you may say, is no longer news. But the new gist is that despite the bold face His Highness had put up publicly – this impression that it was beneath him as a royalty to beg – he had sneaked into the Government House at night to engage in the political equivalent of prostrating before the big hammer fell.

To do this, we gathered, our friend had rushed to the regional head of an influential Christian denomination (where the gomina worships) to intercede on his behalf. Unfortunately for him, as we gathered, when the clergyman reached out to His Excellency for an appointment, he only hinted it was to discuss something “urgent and important” without revealing it had to do with the embattled monarch.

So, when the Government House door was flung open to receive the preacher man, the gomina instantly expressed displeasure at seeing the monarch trailing behind without any cap, “looking like a rain-soaked chicken”. He quickly objected to the “ambush”.

After a rather difficult and brief exchange, the cleric apologized for the embarrassment and left. Thoroughly deflated by the dramatic turn of events by now, His Highness, too, disappeared from the Government House.

The story is not ended. We shall keep you posted.

Debonair Pastor Paul Adefarasin is not one of those Christian leaders who will stay in a corner and lament that democracy is not delivering enough dividends for the populace. To him, everyone, including Christians, is vicariously liable for the quality of leadership the nation gets.

His panacea? It is high time true Christians took interest in politics, right from the street to ward, council, state and national levels, so that “public policies will be determined by the righteous.”

A man of action, charismatic Pastor Paul took a practical step during the Sunday service at his imposing House on the Rock cathedral recently, November 20 precisely. After a stirring sermon which drew a correlation between national prosperity and a leadership that is righteous, he announced to the congregation that the church was on a recruitment drive for all the parties (from APC to PDP to APGA, you name it), directing those interested to the church office to register.

To be sure, the pastor clarified that he remains nonpartisan, as the shepherd of the big Pentecostal family.

With initiatives like this, we can only hope that our political process will be better for it in the foreseeable future.

‘Red Card’ for the Yellow Man

With the electoral wounds he sustained in the recent contest to pick a new gomina of his state still fresh, Chief received a personal shocker few days ago as well. Recall that before that election, he had boasted that his adopted son would win the race, thereby ending the years of insults he has been receiving since his own biological pikin ended disastrously many years ago as gomina of the state whose capital was described by Portuguese explorers as a marvel in the 15th century.

The occasion was the coronation of a new king for the ancient kingdom.

During the reign of the last king, Chief’s relationship with the palace was often rocky. Twice, he was labelled royal “persona non grata” over conduct described as unbecoming of an underling of the great king whose own grandpa stood up to British invaders two centuries ago without batting an eyelid.

On a personal note, Chief’s avuncular build easily creates imperial airs around him. Given his fair skin, many prefer to call him “Yellow Man” behind his back.

This time, Chief’s beef with the palace has to do with his sartorial preference on the day the new king ascended his father’s stool. Before then, not a few tongues had been wagging over his staying aloof while other chiefs were dutifully running up and down to ensure that the occasion was successful.

On the D-Day, Chief typically turned up flamboyantly in eye-popping automobile, obviously to “oppress” most other chiefs who are materially less endowed.

Drama started when Chief attempted to hijack the role of the chief usher at the entrance of the magnificent marquee which received the high and mighty from far and wide, including the second calabash to PMB, a bid fiercely resisted by a coterie of chiefs whose eyes had become glazed due to the sleepless nights they had endured to ensure the occasion’s success.

Unable to have his way there, Chief quietly walked down to the seats reserved for senior natives like him. No sooner had he taken his seat than he fished out a fancy red cap and put it on his head. Such conduct is ordinarily considered unbecoming of any chief before the great king, much less on an extra-ordinary occasion like coronation.

Very soon, word was sent to Chief to quickly “behave”, lest another round of “wahala” was opened for him. Quietly, he obeyed. Perhaps, in quiet protest, he did not wait till the end of the colourful ceremony.