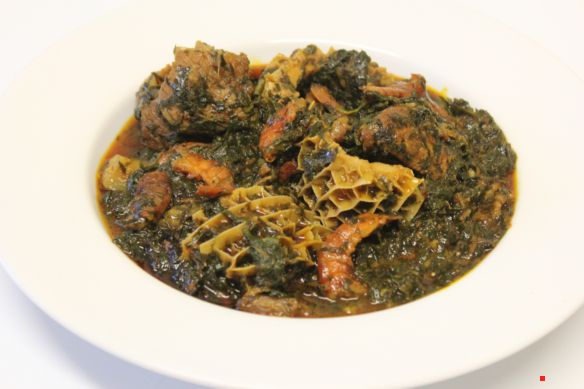 Of all the ethnic groups in Cross River State, the Efiks are most famous for their cuisine and, by extension, their hospitality. Their principal city, Calabar, is described by locals as ‘Canaan Land’ (The Land of Milk and Honey) – a place of peace, harmony and natural riches (in this case, the land itself).

Surrounded by hectares of fertile rainforest, numerous rivers and creeks leading to the Atlantic Ocean, nature has, indeed, blessed the Efiks with a bountiful and natural larder.

Efiks pride themselves on their cuisine; cooking is never a chore. Nay, it is viewed as a way to show love and interest in others – a ‘weapon of love’ if you like. It is widely believed by outsiders that letting an Efik woman cook for your husband could result in even the most faithful of men straying.

The mystique behind the cuisine lies, of course, in the contents of the Efik larder: fresh and smoked meat and fish, leafy vegetables, shellfish and other seafood, various herbs and spices and starchy tubers form the basis of many delicious dishes and illustrate the complexity of flavours that can come from the use of fresh, simple ingredients.

As with other world-famous cuisines, the Efik cook starts with a well flavoured stock: meat or fish is seasoned with dried and fresh pepper and finely ground crayfish. Commercial stock cubes are unnecessary as crayfish provides umami, the fifth (savoury) taste – a sort of culinary ‘je ne se quoi’. Onions are generally excluded from most Efik soups but are used in pottages and rice dishes. Once the meat and stock is ready, other ingredients are ready to play the main or supporting role.

From the forests come a wide variety of bush-meat and afang (a leafy plant which is used for the famous Afang soup) and Ukang Ekporoko (a must-taste ‘African salad’). The surrounding waters yield prawns, clams, crabs, a myriad varieties of fish and, of course, periwinkles (m’fi), without which many an Efik soup is deemed incomplete. Perhaps, that is what makes Efik food so special: each mouthful is a taste explosion with delicious morsels of meat, vegetables and seafood.

But it is not all nature’s ‘free’ bounty, cultivated vegetables and plants and domesticated animals (goats, cows and chickens) feature too. In addition to being used as generic vegetable in some pottages, waterleaf plays a starring role in both Afang and Edikang Ikong. The king of Efik soups, and, perhaps, its most famous culinary export, Edikang Ikong also contains Ikong Ubong (ugu, fluted pumpkin leaves), another stalwart of the Efik larder.

The latter illustrates the seriousness with which Efiks take their food. To make Ekpang (as it is commonly known) is a labour of love. It is a pottage of individually wrapped steamed dumplings of grated cocoyam (water-yam is sometimes added) smothered in a rich thick sauce of smoked fish, the ubiquitous m’fi, fresh prawns if you like, and some fresh or smoked meat, all bound together with good-quality palm oil.

Although palm oil does show up in many dishes, adding flavour and colour, one does not notice its absence in Afia Efere (‘white soup’, so called because it is cooked without any oil). This is always served during traditional ceremonies such as the coronation of The Obong, weddings and funerals. Good quality smoked fish (preferably catfish) and uyayak (a spice with a distinctive earthy flavour) are essential in this soup. Goat meat may be used in which case it is called Afia Efere Ebo or native fowl, when it is referred to as Afia Efere Unen.

The fruits of the oil palm do not escape the attentions of the Efik cook. Boiled and gently pounded to extract a thick pulp and produce a rich scarlet soup made highly aromatic by the use of uyayak and atama (a slightly astringent herb). Called Abak Atama, it is similar to the Itshekiri Banga Soup and the Igbo ‘ofe akwu’.

Other pottages made from cocoyams, yams and plantains (green and semi-ripe) are also part of the Efik cook’s repertoire. The principle always remains the same: the use of good quality ingredients, and variety of flavours and textures sprinkled with a little love and care.

In cooking the Efik way, certain rules must be observed. For instance, no onions and tomatoes in soups; the right shellfish – m’fi or the larger nkor’nkor – must be used as the dish dictates; unshelled or shelled (always with nkor’nkor and, sometimes, with m’fi); snails are never used in draw soups (okro and ogbono), and beef is unusual in Afia Efere.

The preparation of Edikang Ikong, formerly exclusively the preserve of royalty due to the expensive ingredients and the amount of preparation required (the mid-ribs of each ugu leaf were removed), is of particular importance to Efiks. Meat is steamed with very little water, the right proportion of waterleaf to ugu must be observed. Adding onions and tomatoes is an absolute faux pax – there is a legend of an Efik King who had his cook beheaded for adding onions to his Edikang Ikong. It is a fairly dry, vegetable-rich soup as can be seen in the photograph – palm oil is used to loosen it if necessary.

In summarizing the Efik cook, perhaps the story of the origins of Fisherman’s Soup illustrates their philosophy of making the best use of readily available ingredients. The fishermen were often away from home weeks at a time and were only able to take basic provisions (garri, salt and palm oil) which they supplemented with some of their catch. The banks of settlements (ine)  that they came across provided them with some fresh produce such as chilli peppers and herbs which they added to their soups. The banks also provided the name of their staple dish: Efe Ine (soup of the ine).