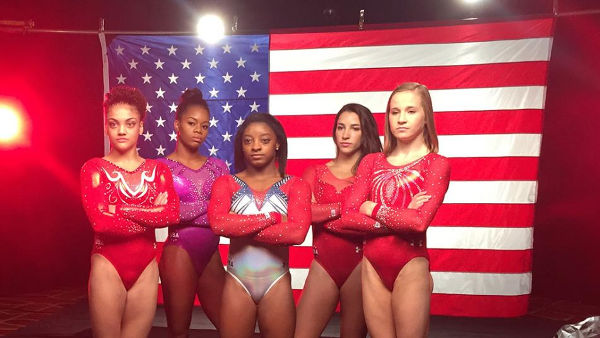 I don’t how many of us paid attention to what members of the US gymnast team wore at the Rio Olympics.

I did and was quite amazed by the quality of the leotards. Further search revealed that  “each member of the ‘Final Five’ had eight custom-fitted competition leotards decorated with 3,500 to 5,000 Swarovski crystals and the uniforms cost between $700 and $1,200 a piece.”

Designed by a company called GK Elite, the 2016 ensemble is a great upgrade, at least in embellishment, from what they wore in 2012. The outfitters also noted that they had come a very long way since 1996 when they began designing for the US Olympic team, improving on each fresh order, and leveraging new technologies to achieve the best that can ever be.

Why expend so much resource on an Olympic uniform when it’s not a wedding dress, you might want to ask.

But I say ‘why not? What would we rather they spent the funds on?

Perhaps they should have spent the funds in hiring and paying clowns such as Solomon Dalung like the Nigerian government? How President Muhammadu Buhari ended up with a fledgling Boy Scout for a sports minister after searching for six months should be a matter for further research.

The Team Nigeria kit, I learnt, finally arrived barely 72 hours to end of the games and where was the outrage?

Now back to Team US.If this amount of attention was given to their outfit, it is needless to ask about pre-event trainings. Are we still surprised that they topped the medals table?

We shouldn’t because excellence is not what you inherit; it is what you do.

Malcolm Gladwell in Outliers already pointed to it with the 10,000th rule and its relationship to excellence. Though some scientists have gone to great lengths to debunk the theory, it’s only commonsense that when you spend time on the details of any endeavour, the harvest is more likely to be bountiful.

But commonsense isn’t Nigerian; anyhowness is. Make no mistake about it.

Our stunted growth as a people so far is a direct descendant of our propensity to approach tasks with unrivalled dispassion.

Look at Nollywood and the subtitles on our local movies. No one is sensible enough to ensure they are done right. You watch those movies and get instant migraine trying to decipher the subtitles. Never mind they tell us it is English.

Of course, it wouldn’t have be too much to get a proper editor for quality outcome, but no, ‘anyhowness’ is the real federal character indicator. We can’t seem to get away from it.

You only need to see the sales charts and acceptability rate of these movies to rightly conclude that we are at home with the half-baked products.

Move away from the movies for a moment and walk into our workplaces.  Just take a back seat for a moment.  Watch how the personnel discharge assigned tasks.

Hardly is anyone interested in process. ‘Just get it done anyhow’ appears to be the only rule to get by.

Our collective landscape is littered with badly executed jobs, unbelievably humiliating scenarios over and over, but where is the collective shame?

Rather, we stumble from one brand of national disgrace to another almost bent on bequeathing this culture of mediocrity on our children and children’s children. We elevated the average to such an enviable pedestal that we may not recognize excellence, not even if it tapped us on the back and said hello.

So, our footballers arrive six hours before their first match in Brazil and, apart from few rants from the usual quarters in the social media, the world moves on.

The country’s contingent did not get their kits till three days before the event ended and no word came from those responsible for the national tragedy.

It is strange how we always tend to ignore the small and insist on breaking our heads over those matters we consider big.

But you see, true excellence lies in those small details which many of us have been wired to always ignore.

We brazenly flout established principles and rather insist on bandying words like Grace, Faith and Favour as if Lord Lugard invented them for us on amalgamation day.

When we hear greatness used with countries like the US, it is clear why. In all tasks, great and small, there is always a process. You follow the process and pay attention to process.

Do we still wonder why, despite the empty pews in their churches, the dollar keeps dealing our naira a bloody nose at every encounter?

For as long as we insist on doing things anyhow, greatness and excellence may come to others while we walk away with bowed heads and empty hands.