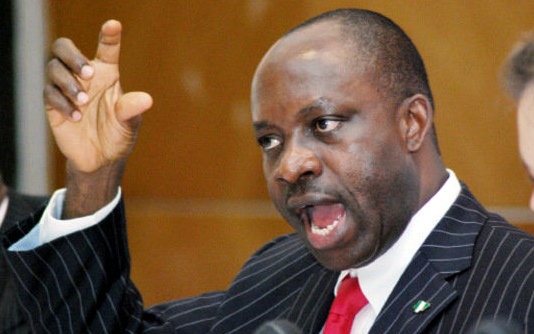 The government has budgeted about N6trillion for the 2016 fiscal year, up from N4trillion this year (with deficit of N2.2trillion). What’s the best way to finance the deficit?

Let me make two points. First, the proposed aggregate budget of N6.04trillion (approximately $30billion at official exchange rate or $21billion at parallel market rate as at today) is too miniscule for an economy with a size in excess of $500billion.  Even when we add the states and local governments, my view is that the aggregate public expenditure will not scratch the economy in terms of pump pricing it out of the current crisis. Aggregate public spending will be about or even less than 10 per cent of nominal GDP – one of the smallest in the world. Second, whether or not there will be fiscal deficit with the N6.04trillion envelope depends on alternative assumptions about the exchange rate regime. That is decisive. A related assumption would pertain to the tax regime. If we keep a fixed exchange rate with an implied deficit of N2.2trillion for the federal government, then the financial system (banks in particular) will come under pressure.

Exchange rate control by the CBN has increased the disparity between the official exchange rate (N196=$) and the parallel market (N280=$). The arbitrage is widening by the day. Do you think it will worsen in 2016?

Well, I don’t want to overheat this issue. My recent lecture on ‘Can a New Buharinomics Save Nigeria?’ basically lays out my views on this subject.  My lecture projects that the arbitrage will only get worse. You have read about the fiscal expansion proposed for 2016 (with a projected N2.2trillion federal deficit as well as deficits by most states). So, with the twin deficits (fiscal and current accounts) widening dangerously, combined with monetary accommodation (loose monetary policy stance) plus a fixed exchange rate regime and crude capital controls, the numbers won’t add up. Something has to give or adjust. Let me stop here for now.

You advocated a hub-and-spoke system for the management of the TSA. But the CBN has cut the benchmark interest rate – the first time in six years – to stimulate liquidity. Do you think this move might have the same effect on the economy as the hub-and-spoke you suggested?

Not at all! The total liquidity injection as a consequence of the cut in interest rate plus reduction in CRR is a small fraction of the withdrawals from the system. They are not substitutes. The current approach is just a resort to the easy way out. We have the technology and the skills to manage it better and keep a 24-hour total overview and surveillance over federal funds.

Over the years the CBN’s risk assessment capacity appears to have been weakened by the dominant role commercial banks have come to play, often leveraging cheap, official funds. Have we entered a new era with the TSA?

There is little correlation between TSA and robust risk assessment/management by the CBN. TSA as currently practised surely alters the balance sheet of some banks, posing new challenges/risks, as well as opportunities. I understand that. However, we can’t keep our eyes off the macroeconomic impact of such actions, especially at this time of economic austerity.

You are a strong advocate of the independence of the CBN as a regulator, but is that not really just a mirage?

This is a topic that we could write a book on.  Let me just make three points. First, let me agree with you that in practice, attempts to protect ‘independent’ institutions such as the judiciary, electoral commission, central bank, etc. can seem to be chasing a mirage, as you put it. The President has the power to appoint and remove key officials of these institutions, has strong control over their budgets as well as a monopoly of the instruments of coercion (control over arrests, investigations, detention, prosecution, etc.). The Presidency in our type of society is like a high-tension wire. If you dare it, it will electrocute you.  Thus, the Central Bank is de facto under the control of the Presidency and National Assembly. Forget the stringent provisions of the CBN Act for the removal of the governor (which requires approval of two-thirds of the Senate). Nothing stops the President from suspending a governor of the CBN at any time.

Furthermore, only a fool would stay a day longer as governor if the President asked him to resign. The President can remove any deputy governor or member of the board at any time. So, if a President is bent on controlling every aspect of the operations of the CBN, there is little the leadership can do, or it may choose to resign.  Preserving the independence of the CBN depends a lot on the personalities, skills and credibility of the leadership at the bank, as well as the mind-set or orientation of the President. Second, it is important to remember that the law (CBN Act 2007, Section 3) explicitly states that, “The Bank shall be an independent body in the discharge of its functions.” There must be a reason why most central banks in the world are granted this independent status and the manifesto of the APC promised to respect CBN autonomy.

There must be a reason why the electoral commission or the judiciary is also granted the same independence. So, it is not me advocating Central Bank independence, it is the law.  The recent revelations regarding ‘arms-gate’ and the apparent abuse of the CBN as an ATM by the Presidency should get reasonable people thinking.  In recent years, I have observed that governments have turned the CBN into a quasi-fiscal authority to evade the constitutional provisions requiring all expenditure of government to be appropriated by the National Assembly. Social responsibility has been elastically interpreted to mean that the CBN can become an alternative fiscal authority without oversight and accountability. An intervention fund can be hurriedly created for just about anything and cash doled out.  Imagine a scenario where a president can order the CBN to create an intervention fund for national stability and CBN literally prints say, N3trillion and doles it out cash to the Presidency to prosecute an election campaign, or for just about anything he fancies.  It is a scary thought. We are going down a dangerous path that ruins the economy. I don’t know any other country where such is tolerated, except perhaps what I watched in a movie about Idi Amin and his country’s central bank governor.

Third, it must be emphasised that Central Bank autonomy requires stringent public accountability and oversight by the parliament. With the benefit of the recent experiences, it is evident that a lot is missing. I have some thoughts on possible amendments to the CBN Act to ensure transparency, open accountability and stringent oversight framework. Independence of the Central Bank actually pertains to what is referred to as instrument autonomy. This means that government determines the targets/goals of economic policy such as inflation, growth rate, unemployment rate, etc. and the Central Bank is allowed freedom to choose a mixture of instruments within its mandate to achieve those objectives. Independence cannot be interpreted to mean licentiousness or that CBN can become an alternative government.

If you had the yam and the knife, which three sectors would get the lion’s share of the 2016 budget?

Of course every sector is important. However, infrastructure – especially transport and power, security and education would be my top three picks.

How concerned should we be about the exit of portfolio investors? Do you think the trend will continue in 2016?

There is hardly a healthy economy with a persistently faltering stock market. On a daily basis, the stock market reflects both the noise and substance of an economy. However, a persistent downward trend signals some fundamental dislocations in the economy. It is both a symptom and a cause of economic difficulties. Recall that the Chinese government tried in the last few months to prop up its stock market in the face of the temporary exist of portfolio investors. A collapsing capital market (with huge wealth losses) has severe impacts on the money/credit markets, reserve accumulation and exchange rate, as well as private consumption and investment (including FDI). Will the trend continue in 2016? It depends on the risk-return calculations of investors.  Currently, most of our stocks are less than penny stocks, which can be attractive to portfolio investors. However, it depends on what is happening on the policy front.  If you are an investor and you see a country with more than 30 per cent parallel market premium and you are required to exchange your money at some fixed official rate, would you rush into the country knowing the potential exchange rate risk and hassles to take out your investment?  So the trend in 2016 will depend on our policy choices, as well as what else happens in the global economy.

NLC is threatening to call a strike if state governors reduce the minimum wage, as they have said. With falling revenues, the states are between a rock and a hard place. What’s the way out?

This is one hot issue that summarises what is wrong with our uniform-standards fiscal federalism, our penchant for announcing policies before we crunch the numbers, as well as the difficulty in reversing or cutting down nominal wages. You can inflate away wages (by drastically reducing the real wage). Although of grave consequence, it does not attract as much resistance as trying to reduce nominal wage even by a penny.  In Nigeria’s current circumstance, something will give – nominal or real wage or employment.  Unfortunately, the way the public debate on the issue is framed merely emits too much hot air and emotion, while ignoring the substantive issues. An important lesson from this is the need for caution before embarking upon yet another populist welfarist programme without facts. In 1966, Wolfgang Stolper published a book entitled ‘Planning without Facts: Lessons in Resource Allocation from Nigeria’s Development, With an Input-Output Analysis of the Nigerian Economy, 1959-60’. The title says it all. Incidentally, much of our public policy on wages and welfare schemes keeps reminding us of this book. Remember the famous Udoji wage review or the petroleum subsidy, etc.

The call for the removal of petrol subsidy is coming even from the marketers now. The government seems confused – or at least, undecided. Is 2016 the make-or-mar year for petrol subsidy?

I appreciate the dilemma facing the Buhari government on fuel subsidy and the exchange rate.  As a government elected on the populist mantra ‘to provide the good things of life’ for the citizens, it is afraid to deliver the bad news; namely, that the party is over and we must have a fresh, tough beginning. The truth is that Nigeria cannot afford the subsidy anymore.  Put differently, the cost of keeping it is horrendous.  It is no longer a question of whether but when the subsidy will be removed. Delayed adjustment is costly. At times like this, I remember the book by J.F. Kennedy entitled ‘Profiles in Courage’. The government seems understandably afraid of the possible political backlash, but let’s give it the benefit of the doubt.